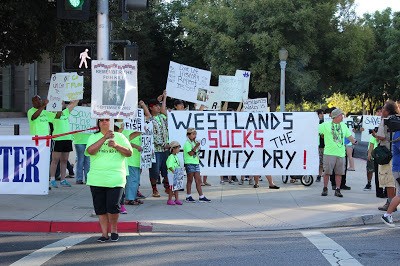 It looks like the politically powerful Westlands Water District, one of the main backers of Governor Jerry Brown's Delta Tunnels and Congressional legislation to eviscerate protections for Sacramento River Chinook salmon and Delta smelt, is in more financial trouble.

Fitch Ratings downgraded the scheduled October 26 bond sale by Westlands from 'AA-' to 'A+'.

Among the issues facing Westlands Water District, Fitch cites shrinking irrigated acreage, previous financial obligations, and the potential for increased “leveraging” to pay for the Delta Tunnels," according to Restore the Delta (RTD).

The downgrade reflects Fitch's view that district operations face increased pressure over time," reported Business Wire, a Berkshire Hathaway Company, on October 17. "Despite improvements to the district's debt profile following this transaction and potentially lower leveraging related to a drainage settlement with the U.S. than previous estimates, the prospect of ongoing escalation in district charges coupled with probable declines in irrigated acreage heightens concentration risk and affordability concern."

The statement includes a warning that overcommitting to the California WaterFix could push the rating even lower.

Barbara Barrigan-Parrilla, Restore the Delta executive director, quipped, “Bond ratings agencies are like Mom and Dad. Westlands is asking to raise the limit on their credit card again, despite questionable earnings potential. At some point Mom and Dad get out the scissors."

“Tunnel proponents cannot demonstrate how $17 billion, before cost overruns, will be raised to build the Delta Tunnels. The public does not have a completed and vetted finance plan for the project to examine. When asked who commits to paying the bill, all the water districts point to someone else," she said.

"What is clear is that ‘someone else’ includes federal taxpayers, California taxpayers, Southern California and Silicon Valley property taxpayers, and urban water ratepayers. These folks will end up subsidizing large agricultural interests like Westlands growers," Barrigan-Parrilla concluded.

The downgrading follows a huge financial scandal that Westlands has been enmeshed in. The federal Securities and Exchange Commission (SEC) on March 10, 2016 charged Westlands, California’s largest agricultural water district, with “misleading investors about its financial condition as it issued a $77 million bond offering."

In addition to charging the district, the SEC also charged its general manager Thomas Birmingham and former assistant general manager Louie David Ciapponi with misleading investors about its financial condition.

“Birmingham jokingly referred to these transactions as ‘a little Enron accounting’ when describing them to the board of directors, which is comprised of Westlands customers,” the SEC reported.

The SEC said Westlands agreed to pay $125,000 to settle the charges, making it only the second municipal issuer to pay a financial penalty in an SEC enforcement action.

“The undisclosed accounting transactions, which a manager referred to as ‘a little Enron accounting,’ benefited customers but left investors in the dark about Westlands Water District’s true financial condition,” said Andrew J. Ceresney, Director of the SEC Enforcement Division. “Issuers must be truthful with investors and we will seek to deter such misconduct through sanctions, including penalties against municipal issuers in appropriate circumstances.”

For more information, go to: http://www.dailykos.com/story/2016/3/10/1499271/-Federal-SEC-Charges-Westlands-Water-District-for-Enron-Accounting