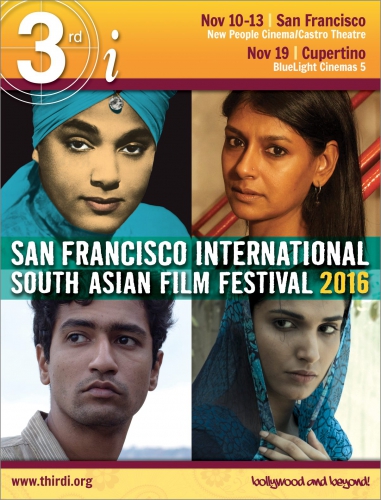 3rd i's 14th annual SF International South Asian Film Festival presents some of the best cinema from India, Pakistan, Bangladesh, UK, Canada, and the USA. From nuanced dramas to witty comedies, this year’s Focus on Diaspora presents an expansive view on the immigrant experience. Indie Narratives take brave risks and explore issues from madness to modernity, sex to social justice; 3rd i's commitment to the celluloid celebration of Women’s Stories and Queer Voices continues as strong as ever; and Bay Area Filmmakers, shorts and documentaries are on the docket as always. More information, including expanded program and ticketing information, is available at: http://www.thirdi.org

7:15pm Masaan (Fly Away Solo)
(Neeraj Ghaywan, India/France, 2015, 109mins)
With its premiere at the prestigious Cannes film festival, Masaan (an Anurag Kashyap production), has become one of the most celebrated independent Indian films in recent memory. Set along the picturesque Ganges river in Benaras, Neeraj Ghaywan’s film weaves together two separate stories joined by a common concern, the effect of narrow-minded tradition on the budding desires of youth.

7:15pm Original Copy
(Florian Heinzen-Ziob & Georg Heinzen, India/Germany, 2015, 52mins)
A charming portrait of one of the last hand-painters of colorful and dramatic Bollywood posters, Original Copy is an exemplary and insightful doc about the magic of cinema, and about the keepers of a disappearing artform in the face of India's changing film industry. Preceded by Events in a Cloud Chamber (Ashim Ahluwalia, India, 2016, 21mins)

9:00pm One Crazy Thing
(Amit Gupta, UK, 2016, 90mins)
Set in London, Amit Gupta's witty script produces a romantic comedy that echoes the best of Woody Allen. Jay is a former daytime TV star whose life has hit rock bottom until he meets his dream girl. Hannah is bright, beautiful and hates modern life. There's just one problem. How does Jay tell Hannah about the leaked sex tape which made him an internet sensation?

1:00pm Kaul (A Calling)
(Aadish Keluskar, India, 2015, 122mins)
Aadish Keluskar’s bold and innovative Kaul can only be described as a truly transformative cinematic experience. Deeply inspired by the films of Tarkovsky and Bela Tarr, and firmly rooted in a Marathi milieu, Keluskar delivers a uniquely visceral film that brings equal measure of the surreal and the sublime.

3:30pm The World of Goopi and Bagha (Goopi Gawaiya, Bagha Bajaiya)
(Shilpa Ranade, India, 2013, 79mins)
Shilpa Ranade in Person!! Set in a world full of vibrant music and color, Shilpa Ranade’s magical film is an animated adaptation of one of Indian master Satyajit Ray's most beloved works, and premiered to great acclaim at the Toronto Film Festival. This timeless fable follows the hilarious misadventures of Goopi and Bagha, two tuneless musicians banished from their villages for their cacophonous music.

5:45pm Khoya (Lost)
(Sami Khan, India/Canada, 2015, 82mins)
Sami Khan in Person!! Featuring stunning cinematography, Sami Khan's outstanding feature Khoya is a nuanced thriller about the universal quest to find home and belonging. When Rog Moreau’s mother dies, the adoptive ties to his Canadian identity begin to feel tenuous, setting him off on a journey to India to unravel the mystery surrounding his adoption.

8:00pm Castro Reception with the Filmmakers

9:00pm Parched
(Leena Yadav, India/US/UK, 2015, 116mins)
3rd i's Saturday Night at the Castro!! Parched takes the riot of Bollywood and infuses it with an indie vision in this warm and incisive film that premiered at the Toronto Film Festival last year. Leena Yadav examines the complex lived experiences of women in India through the strident lens of ‘sex in the village’ and produces a film that is raucously full of girl power.

12noon Aligarh
(Hansal Mehta, 2015, India, 114mins)
Premiering to a standing ovation at the Busan Film Festival, Aligarh is one of the most vital films to come out of India in recent years. Based on the true story of Dr. Siras, a linguistics professor who faced suspension due to his sexual orientation, the film is a heartfelt demand for the right to love, and a poetic call to transcend identity.

2:30pm United Red Army (The Young Man Was, Part 1)
(Naeem Mohaiemen, Bangladesh/USA/Japan, 2012, 70mins)
Skype Q&A with Naeem Mohaiemen!! This striking and hypnotic documentary offers a fascinating interrogation of the legacy of radical left-wing movements. Using archival sound and surveillance video, Mohaiemen reconstructs the hijacking of an airplane at the hands of the Japanese Red Army in 1977, when it was forced to land in Dhaka, Bangladesh.

4:45pm Gardaab (Whirlpool)
(Harune Massey, Pakistan/USA, 2016, 93mins)
Harune Massey in Person!! With echoes of Romeo and Juliet, Gardaab is a taut and stylized thriller about two lovers caught in a web of family and gang warfare in the underbelly of Karachi. Harune Massey's restrained direction offers a compelling meditation on love, and on the fragility of human life, and points to an exciting new wave of Pakistani filmmakers on the horizon.

7:15pm Coast to Coast: Mumbai to the Mission
(Various, India/UK/USA, 2015-16, 82mins)
Bay Area Filmmakers in Person!! From power to pleasure, courage to comedy, this year's kaleidoscope of cinematic offerings engage the sexual and the sensual: a young man gathers strength to approach his crush, while a young woman plots a shocking escape from marriage; Audrey Lorde's poetry and Justin Bieber's music become fodder for queer interventions; and SF's Sexy Circus ponders its future.

12noon Gaalibeeja (Wind Seed)
(Babu Eshwar Prasad, India, 2016, 96mins)
A unique cinematic experience, Gaalibeeja is a meditation on cinema and modernity from an exciting new voice in Kannada cinema. While paying homage to the likes of Wim Wenders, Jim Jarmusch, and Abbas Kiarostami, artist-turned-filmmaker Prasad blends social critique with exquisite cinematic form in his take on the “road movie”.

2:00pm Korla
(John Turner and Eric Christensen, USA, 2015, 78mins)
Followed by panel discssion!! Korla Pandit was a spiritual seeker and a godfather of exotica music who charmed American housewives on television in the 1950s. What lay behind Korla’s metaphysical musings and his enigmatic Indian facade? And what of the ‘dark secret’ that he took with him to his grave in 1998? Find out in this fascinating and exotic tour through Pandit’s dizzying life.

4:15pm Lala Begum
(Mehreen Jabbar, Pakistan/India, 2016, 58mins)
Starring legendary Pakistani actress Marina Khan (Tanhaiyan), Mehreen Jabbar’s evocative and endearing Lala Begum is a complex and impressive drama that delves into the ghosts of Pakistan’s past. Two estranged sisters come to terms with their haunting past: of the loves they shared, of the sacrifices they made, and of their struggles with the colonial heritage that defines their lives.

5:45pm Original Copy
(Florian Heinzen-Ziob & Georg Heinzen, India/Germany, 2015, 52mins)
A charming portrait of one of the last hand-painters of colorful and dramatic Bollywood posters, Original Copy is an exemplary and insightful doc about the magic of cinema, and about the keepers of a disappearing artform in the face of India's changing film industry.

7:15pm Between The Lines
(Ritesh Menon, India, 2015, 79mins)
Skype Q&A with Nandita Das and Subodh Maskara!! Nandita Das, one of India’s finest actresses, writes and stars in this stellar feature which examines how gender inequality cuts across class lines. A high-profile lawyer couple end up arguing on opposite sides of a criminal trial, resulting in the blurring of their personal and professional lives. Features superlative performances by Das and real-life husband Subodh Maskara.

original image (2620x778)
END_OF_DOCUMENT_TOKEN_TO_BE_REPLACED
Add Your Comments
Support Independent Media
We are 100% volunteer and depend on your participation to sustain our efforts!