Add an Event
Newswire
Calendar
Features
Home
Donate
From the Open-Publishing Calendar
From the Open-Publishing Newswire
Indybay Feature
Publish to Newswire
Add an Event
Related Categories: U.S. | Environment & Forest Defense | Global Justice & Anti-Capitalism | Government & Elections | Police State & Prisons | Racial Justice
The Surveillance State Descends on the Dakota Access Pipeline Spirit Camp
by via ACLU of North Dakota
Tuesday Oct 11th, 2016 4:14 PM
October 10, 2016 - For the past six months, at the confluence of the Cannonball and Missouri Rivers, history has been made at one of the largest international gatherings of indigenous people in recent history. Representatives from well over 100 indigenous nations and thousands of people have camped, prayed, and taken action in solidarity with the Standing Rock Sioux Tribe against the construction of the Dakota Access Pipeline on and near the tribe’s sovereign land in North Dakota. 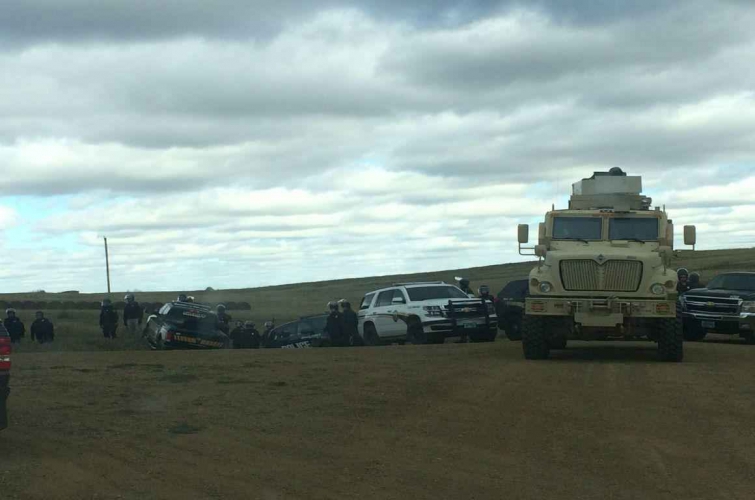 original image (1160x768)
And for the past six weeks, history has repeated itself as the Morton County Sheriff’s Office has dramatically increased its surveillance of the gathering, militarized the county, and taken action to suppress the religious expression of the indigenous people gathered at Sacred Stone.

The use of surveillance, military-style force, and religious oppression against indigenous people has a long history in this country. Today, on Indigenous Peoples’ Day, and at a moment of surging indigenous power and strength, we bring light to the ongoing repression of the indigenous nations by Morton County and the state of North Dakota.

Dakota Access, or DAPL, is a 1,168-mile pipeline, owned by Energy Transfer Partners. If finished, the pipeline would carry oil from North Dakota’s Bakken Oil Field through South Dakota and Iowa before ending in Illinois for refining. Proposed over two years ago, DAPL originally crossed the Missouri River north of Bismarck, North Dakota, but was re-routed due to concerns over Bismarck’s water supply. The new route placed the Missouri River crossing a half-mile north of the Standing Rock Sioux Reservation, avoiding “official” reservation land but endangering the water supply for an entire sovereign nation if the pipeline leaked or burst.

When construction on the pipeline began earlier this year, members of the Standing Rock Sioux Tribe and allies gathered at Sacred Stone and began a permanent spirit camp to pray and bring attention to the injustice of DAPL’s route and the risks it poses to land, water, and cultural resources. Over the summer, the camp grew, eventually spilling over into an overflow camp, known as the Oceti Sakowin camp, as well as several others in the same area. The camps have held, at times, thousands of people who come to pray and stand together in solidarity.

Starting around the beginning of August, and continuing today, many actions, direct and otherwise, have occurred along the pipeline route, mainly in Morton County. Participants in these actions — ranging from prayers and round dances in public areas to physical lock-downs on construction equipment — refer to themselves as “water protectors,” in deference to the core reason for the existence of the camp in the first place: to protect the water threatened by the Dakota Access Pipeline.


Ramping Up: Surveillance and Militarization in Morton County

At the front of the Oceti Sakowin camp entrance, a sign reads: “We Are Unarmed.” The same cannot be said for the government reaction to the indigenous nations’ protest. In response to ongoing peaceful actions, the Morton County Sheriff’s Office has activated one of the most militant responses ever in North Dakota’s history.

In mid-August, Gov. Jack Dalrymple declared a state of emergency for southwest and central south North Dakota in response to actions taken by the water protectors. Despite the governor’s and the local sheriff’s verbal commitment to allowing constitutionally protected lawful protest, the result of the state of emergency has been a vast suppression of the right to protest and a dramatic increase in police surveillance around — and above — the camp.

Surveillance starts early every morning with near-constant low overflights of the camp by both plane and helicopter. One morning alone, on October 2, surveillance flights were recorded at 7:15 a.m., 7:45 a.m., and again at 11:25 a.m. These surveillance flights continue if there is any perceived action coming out of the camp. Water protectors are followed on county roads by both state and private security helicopters as they drive on public roads in Morton County.

Police have used the roadblocks as an excuse for unwarranted stops to ask drivers and passengers where they are staying, why they are on the road, and where they are going. They also regularly check IDs and license plates of anyone driving through one of the roadblocks — people in Morton County can expect to be stopped for simply driving down a public road.

And they aren’t just bringing out police cars.

Military vehicles are being used at roadblocks and at checkpoints and are regularly brought out during peaceful actions to intimidate water protectors. A BearCat and an MRAP have appeared at nearly every action over the past two weeks, despite water protector’s public position of nonviolent direct action. Early in September, Gov. Darlymple activated the National Guard, and they have been recorded driving out the riot squad to nonviolent direct actions taken by water protectors.

In addition to on-going surveillance, harassment, and regular ID checks, water protectors who have been arrested report a series of civil liberties violations. The right to counsel and the right to free association don’t go away under a state of emergency. Despite that fact, protectors report being interrogated — without a lawyer present — by a gang intelligence unit from the North Dakota Department of Corrections and asked questions about where they are camped and with whom they are associated.

The situation in Morton County is tense enough with the presence of local, state, and national police and military force. But to make matters worse, the state militarization is supplemented by the presence of G4S, the notorious private “security” organization that profits off of private prisons around the world. G4S has been hired by Energy Transfer Partners as a private contractor, but their employees have blocked people on public roads, hit horses with their trucks, and appear to be working with government forces to coordinate against water protectors when they come out of camp, flying a helicopter to surveil cars as they drive along public roads near construction sites.

All of this comes at the same time that Morton County is increasing charges on water protectors and the sheriff is heating up his rhetoric in the press. At a press conference on October 6, Sheriff Kyle Kirchmeier announced he would request help from sheriff’s offices around the country and practically encouraged local ranchers to keep firearms with them at all times. The sheriff’s office regularly accuses people at the camp of harassing and intimidating ranchers, breaking windows, and cutting fences. These accusations are not backed by evidence, but they are being made to sway public opinion against people at the camp and to stoke tensions between water protectors and those who live in Morton County. This is a classic example of trial by media, an attempt to convict peaceful water protectors of things for which they are not guilty in the court of public opinion.

The mobilization of military-style force against indigenous people in this country has a long and terrible history. So, too, has the history of religious oppression of those same people. And while in North Dakota history repeats itself with military force, so too is it repeating itself with religion.

The Sacred Stone camp started and maintains itself as a spirit camp. Prayer is the starting point for all opposition to the pipeline, and many — if not most — of the actions occurring around construction sites are occurring in public spaces and are prayers. The spiritual nature of the camp and DAPL resistance has been at best ignored by Morton County and, at worst, has been suppressed before it can even begin.

On September 27, five people were arrested at an action at which the majority of people were on the side of the road praying. On October 3, a group of water protectors left camp to travel to the site of pipeline construction with the intent to pray. At the small town of St. Anthony, the cars were greeted not with an open public road but a police roadblock with over 30 police in riot gear, armored military vehicles, and police surveillance. Ironically, the sheriff’s office reported blocking the road out of fear that emergency vehicles would not be able to get through to St. Anthony because of the water protectors driving through. But what prevented any emergency vehicles from getting through wasn’t the protectors — they stood on the side of the road — but the police roadblock itself.

Jennifer Cook, policy director for the ACLU of North Dakota, stated in an Inforum article that “It's highly problematic and is not a proper use of law enforcement resources. … Additionally, the use of militarized armored vehicles, riot gear, and tactics by law enforcement at protests that consist of peaceful prayer and nonviolent direct actions is a blatant misuse of these tools and will likely encourage police to use force against citizens when force is not necessary for the situation.”


The Time to Demilitarize Is Now

The Sacred Stone Camp and the water protectors are peaceful, nonviolent, and led and directed by indigenous people who for too long have experienced oppression by government agencies, both state and local. The time for demilitarization is now — before the heated rhetoric of the sheriff’s office and the on-going police presence create a situation that ends in violence.

Our country has a long way to go in our relations with indigenous nations. We can start now in North Dakota by demilitarizing, ending the surveillance of the camp and water protectors, and starting to listen to the prayers of those who are protecting the water for us all.


We are calling on the state of North Dakota to stop its suppression of the right to protest and to demilitarize Morton County. Sign our petition here and learn more about Sacred Stone Camp and how you can help here.

Peaceful water protectors demonstrate in front of a police roadblock preventing them from driving on public roads to pray at one of the Dakota Access construction sites on October 3.
§
by via ACLU of North Dakota Tuesday Oct 11th, 2016 4:14 PM 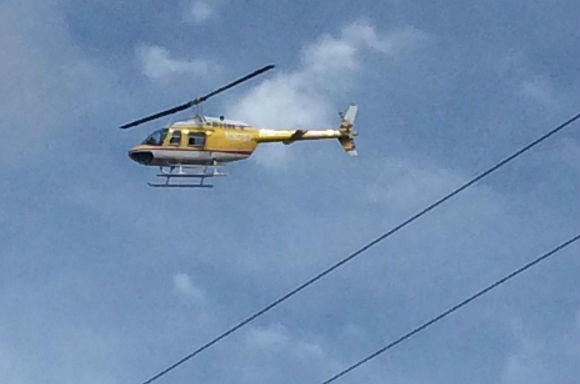 Private contractor helicopter flies over water protector vehicles as they drive along public county roads in North Dakota on October 4.
§
by via ACLU of North Dakota Tuesday Oct 11th, 2016 4:14 PM 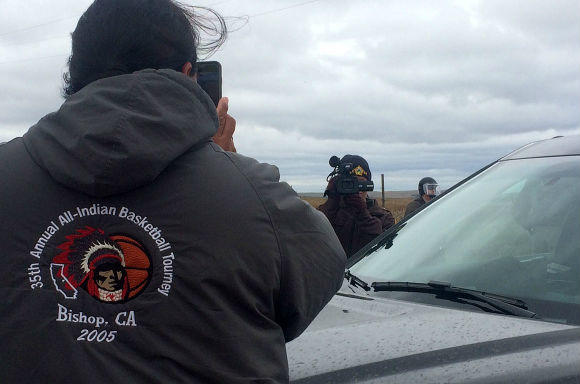 Police and a water protector film each other at a peaceful protest in front of a police roadblock in St. Anthony, North Dakota.
Add Your Comments
Support Independent Media
We are 100% volunteer and depend on your participation to sustain our efforts!