by SF Labor News
Contributions To City Hall Aide Are Illegal Under This November's Proposition T Ballot Measure, One Lobbyist Even Donated -Twice- The Legal Limit 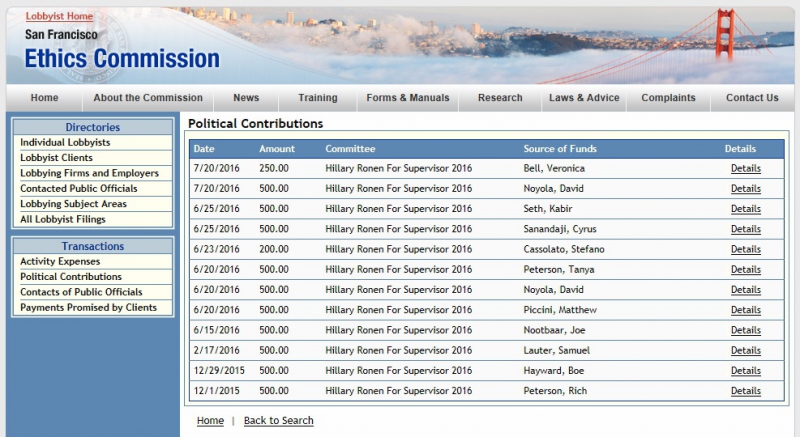 original image (987x540)
THEY ARE LOBBYISTS FOR SOME OF THE MOST CONTROVERSIAL DEVELOPERS AND CORPORATIONS IN SAN FRANCISCO. Yet public records show that lobbyists are increasingly donating thousands of dollars to District 9 Board of Supervisors candidate Hillary Ronen, who has to this point staked a claim as the "most progressive" replacement for her boss David Campos, who is termed out of office.

The glaring question is, Why are lobbyists betting so big on Ronen?

One explanation is that many of the lobbyists' clients have had business before Ronen, the District 9 Chief of Staff, at the time their contributions were made. Some of those donations even coincide with City Hall meetings between the lobbyist and Ronen regarding items pending before her and Sup. Campos. 48 Hills blogger Tim Redmond recently commented on this practice in relation to District 1 candidate Sandy Fewer's donations from School District employees, writing, "I would much rather worry about office holders soliciting contributions from lobbyists, but whatever: Don’t go asking the people whose jobs you can influence to give you money."

Ronen has taken more than $5,000 in reported lobbyist donations, and this practice will be illegal if San Francisco voters approve Proposition T on the November ballot. Lobbyist David Noyola has even donated $500 twice, which is illegal under San Francisco campaign finance laws and for which the Ethics Commission is reportedly conducting an investigation.

Ronen has now taken money from lobbyists for the two most controversial developers in the Mission over the past several years:  Nick Podell Company and Axis Development, sponsors of recently-approved projects to be built all or in part non-union that have been dubbed the "Beast on Bryant" and the "Axis of Evil," respectively. Other clients of Ronen's lobbyist donors include Trumark Urban, Crescent Heights Development, and 40 Bernal Heights Boulevard, as well as tech companies Airbnb and Uber, Shell Oil wholesaler Au Energy, non-union grocer Grocery Outlet, and eviction attorney Andrew Zacks.

Lobbyists have been slow to report their contributions to Ronen in the past, so it is uncertain whether even more donations have gone unreported.

The Ethics Commission has confirmed that multiple ethics complaints have been made against Ronen alleging conflicts of interest and pay-to-play, but Ethics staff declined to comment about pending investigations.  No other District 9 candidate has received lobbyist donations and it is as yet unclear why lobbyists are pouring money into Ronen's campaign.

SF Labor News
Add Your Comments
Support Independent Media
We are 100% volunteer and depend on your participation to sustain our efforts!