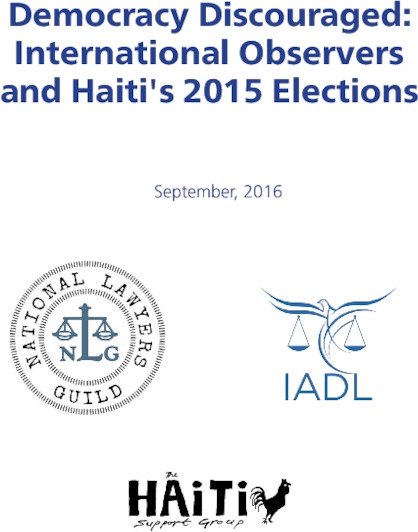 Download PDF (940.1KB)
NEW YORK, September 19, 2016 — As Haiti prepares for presidential and legislative elections on October 9, 2016, a new report (see PDF) by voting rights advocates charges that international observation efforts in previous rounds were a “monumental failure.” Despite clear evidence of fraud, violence and other irregularities during the August 9 and October 25, 2015 elections, international observers hailed the two rounds of voting as a successful exercise of democracy, the report shows. “The failure to uphold international standards for free and fair elections raises serious questions about the objectivity and independence of international observers,” said Nicole Phillips, a member of the National Lawyers Guild and one of the report’s authors.

The report, entitled Democracy Discouraged: International Observers and Haiti’s 2015 Elections, documents how the Organization of American States (OAS) and European Union (EU) electoral observation missions ignored reports of electoral problems from Haitian observers, journalists, two governmental commissions and, at times, even their own observers. “How is it possible that the OAS and EU observers did not see what everyone else did?” said Mario Joseph, Managing Attorney at the Bureau des Avocats Internationaux, based in Port-au-Prince, and a member of the International Association of Democratic Lawyers’ governing Bureau. “Their unjustifiable endorsement of the 2015 elections has badly damaged international observers’ credibility in Haiti.”

Despite mounting evidence of fraud, OAS and EU observers persistently opposed calls from a broad spectrum of civil society within Haiti for an independent verification, and defended the election results. The international observers’ position closely mirrored that of the United States and other large donor nations, which used the flawed assessments of the OAS and EU to justify their opposition to verification, the report shows.

The apparent influence wielded by powerful states over electoral assessments raises doubts about the neutrality and independence of international observers, the report states. In May 2016, an independent commission confirmed that “massive fraud” had badly distorted the October 25 election’s outcome and ordered the presidential race rerun. In response, the U.S. government cut off election funding and EU observers withdrew in protest. The OAS mission has announced it will stay to observe the next round.

The report recommends that international observation missions report objectively and honestly on the electoral process, refrain from political interference, and incorporate the views of Haitian civil society observers into their evaluations of the upcoming October 9 vote. Shodona Kettle, Chair of the Haiti Support Group, states: “Our civil society partners are deeply concerned by the reluctance of international organisations to address serious allegations of fraud and irregularities during the elections. Rather than sweep this issue under the carpet, we urge the EU and OAS to acknowledge and respond to the contributions of local observers in the monitoring of elections in their country.”

The National Lawyers Guild and International Association of Democratic Lawyers’ November 2015 report calling for an independent investigation to address widespread allegations of fraud is available at http://www.nlg.org/news/releases/nlg-and-iadl-election-observers-establish-flaws-haitis-october-25-vote-call.