Add an Event
Newswire
Calendar
Features
Home
Donate
From the Open-Publishing Calendar
From the Open-Publishing Newswire
Indybay Feature
Publish to Newswire
Add an Event
Related Categories: California | Central Valley | Environment & Forest Defense | Government & Elections
Jerry Brown calls for fast-tracking of river agreements to build Delta Tunnels
by Dan Bacher
Sunday Sep 25th, 2016 5:00 PM
“The Shasta Dam raise, Sites Reservoir and the Delta Tunnels need to be considered as one project,” emphasized Caleen Sisk, Chief and Spiritual Leader of the Winnemem Wintu Tribe. “Without one, you can’t have the others. If the tunnels are built, there will be no water to put in them. You need Sites Reservoir to provide the water for the tunnels and the Shasta Dam raise to provide water for Sites.”

“Although the state and federal governments are saying they are separate projects, they are all really one project,” noted Sisk. “Why do you think Westlands Water District, the Resnicks, Metropolitan Water District and other water districts are all pushing for the Shasta Dam Raise, Sites Dam and the Delta Tunnels?”

Photo: The Winnemem Wintu Tribe and their allies held a protest in front of the Bureau of Reclamation office in Sacramento on September 21. Photo by Dan Bacher. 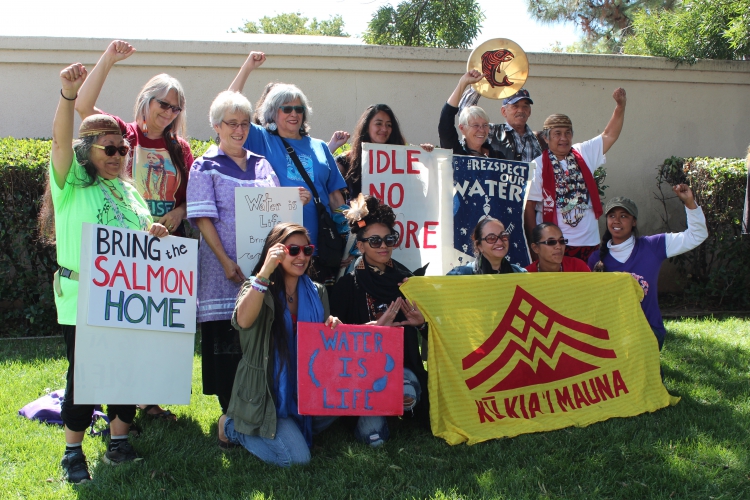 As The Winnemem Wintu Tribe proceeds on their historic 300-mile long Run4Salmon from Vallejo to the McCloud River, Governor Jerry Brown is calling for the expediting of a river flow agreement in order to build his Delta Tunnels to export more water to corporate agribusiness interests and Southern California water agencies.

In his September 19, 2016 letter to Chair Felicia Marcus of the State Water Resources Control Board, Governor Brown urged the Board and California Natural Resources Agency officials to fast-track a comprehensive agreement on environmental flows in both the San Joaquin and Sacramento River Basins.

“State Water Board staff recently released a draft proposal to update minimum flow standards for the Lower San Joaquin River to the Delta,” wrote Brown. “This is only one part of the information needed. To provide a complete picture of the needs in the Delta, I urge the Board to move quickly to complete the remainder of their analysis on the Sacramento River Basin.”

“Delay may be too costly,” said Brown. “The need to improve our aquatic ecoystems is urgent. Many communities are paralyzed and fearful of a lengthy and unpredictable regulatory process. Voluntary agreements in which water rights holders improve stream flows and restore habitat could offer a faster, less contentious and more durable outcome.”

Brown said he had directed departments in the Natural Resources Agency to “explore the potential” for this comprehensive agreement — and to report back to him by the end of October with their assessment and a schedule that enables California to “start improving water quality” in the Delta and its tributaries beginning in 2017.

In a statement, Barbara Barrriga-Parrilla, Executive Director of Restore the Delta (RTD), criticized the Governor’s call to fast-track the flow agreements as “disingenous at best.”

“While Restore the Delta has pushed for a comprehensive update to the Delta water quality plan for the both the San Joaquin and Sacramento Rivers before moving forward with any further processes for permitting the Delta Tunnels, Governor Brown’s request to the State Water Resources Control Board to now fast track flow agreements is disingenuous at best,” said Barrigan-Parrilla. “The water needed to fill the tunnels will have to come from the watersheds of both rivers upstream of the Delta. Without additional water from these river systems, the tunnels do not pencil out economically, requiring the multi-billion dollar Federal and State tax subsidies reported on recently.”

“Moreover, the tens of thousands of pages of testimony that have been turned in to the State Water Resources Control Board for the first part of the hearings on permitting the Delta tunnels, even before later hearings on fisheries and wildlife begin, elucidate the breadth of environmental damage the project will inflict on the San Francisco Bay-Delta estuary – from construction impacts to drinking water quality degradation for the City of Stockton,” she stated.

She said the governor’s letter continues “a long and problematic tradition of governors interfering with State Water Board deliberations and decisions.” She noted how Pete Wilson rejected a draft water rights decision in 1993 after water contractors complained about its effects on them — and how a voluntary agreement to promote salmon friendly flows on the San Joaquin River for 12 years failed to protect salmon.

“On the surface, Governor Brown seems to be gaining an understanding that Delta flow and water quality objectives should be considered as a unitary whole, unlike what the Board has proposed. On this narrow point, Restore the Delta actually agrees with the governor. But our agreement ends there,” Barrigan-Parrilla said

“Yet, the governor’s motivations to accelerate agreements go beyond his stated wish to urgently ‘improve our aquatic ecosystems’ and are truly a mechanism to benefit his treasured tunnels project, the beleaguered California WaterFix. Chair Marcus and Boardmember Tam Doduc have stated their willingness to consider voluntary agreements for appropriate flow objectives in the Tunnels proceeding now under way—but only after all the evidence submitted by all parties to the proceeding is in and has been vetted. The outcome of this process is of grave concern for the water contractors, the Department of Water Resources, and Governor Brown on their behalf,” she explained.

Barrigan-Parrilla accused the Governor of hoping to “short-circuit the water board's vetting process” with his letter, as have other California governors before him.

“It is a Hail Mary pass on behalf of the water contractors in which ‘voluntary agreements’ become a water grab from all the rivers of the Central Valley. It is a shame that Governor Brown does not recognize the true environmental and economic value of a healthy San Francisco Bay-Delta estuary, and only the value of water exported for profit,” she concluded.

Brown submitted the letter as the Winnemem Wintu and their allies are on a 300-mile prayer journey from Sogorea Te (Glen Cove, Vallejo) to the historical spawning grounds of the winter-run Chinook salmon on the McCloud River. The journey started on September 17 and will continue through October 1. (http://www.dailykos.com/stories/2016/9/19/1572022/-DAMS-DEAD-FISH-TUNNELS-and-INDIANS)

“This journey is a walk/run/boat/bike and horseback ride to bring attention to the plight of all the runs of salmon in California, and the water management practices that have brought some of those runs to the edge of extinction,” according to a news release from the Tribe. “It is a prayer to let Californians know that the water they enjoy has come to them at the cost of others and the threat of death and extinction to species necessary for a healthy California.”

“We consider Shasta Dam a weapon of mass destruction,” said Chief Caleen Sisk of the Winnemem Wintu Tribe. “It has already taken our homes, sacred sites, burial sites, and stopped the salmon from returning to their historical spawning grounds. If these tunnels are built, Governor Brown’s so called ‘California WaterFix’, they will not only cause more death and destruction to the already endangered salmon, but they will encourage and motivate plans to enlarge Shasta Dam. An enlarged Shasta Dam will flood what remaining sacred sites, and cultural sites that we still use today.”

“Although the state and federal governments are saying they are separate projects, they are all really one project,” noted Sisk. “Why do you think Westlands Water District, the Resnicks, Metropolitan Water District and other water districts are all pushing for the Shasta Dam Raise, Sites Dam and the Delta Tunnels?”

In written testimony submitted to the State Water Resources Control Board for the ongoing hearings regarding the Bureau of Reclamation’s and Department of Water Resources’ water diversion change petition required to build the California WaterFix, Winnemem Wintu Governmental Liaison Gary Mulcahy asks:

“Drowned cultures, dead and extinct fish, broken promises, stolen lands, environmental destruction, water grabs, and years and years of litigation – is it truly worth it?”

The Delta Tunnels project is based on the absurd premise that diverting more water out of the Sacramento River before it flows into the Delta would somehow “restore" its fish populations and ecosystems. In fact, the construction of the two 35-mile long tunnels under the Delta would hasten the extinction of Central Valley steelhead, Sacramento River winter-run Chinook salmon, Delta and longfin smelt, green sturgeon and other fish species. The project would also imperil the salmon and steelhead populations on the Trinity and Klamath rivers, a fishery that for thousands of years has played an integral part in the culture, religion and food supply of the Yurok, Karuk and Hoopa Valley Tribes.

For more information on the Winnemem Wintu’s 300-mile journey: http://www.run4salmon.org
Add Your Comments
Support Independent Media
We are 100% volunteer and depend on your participation to sustain our efforts!