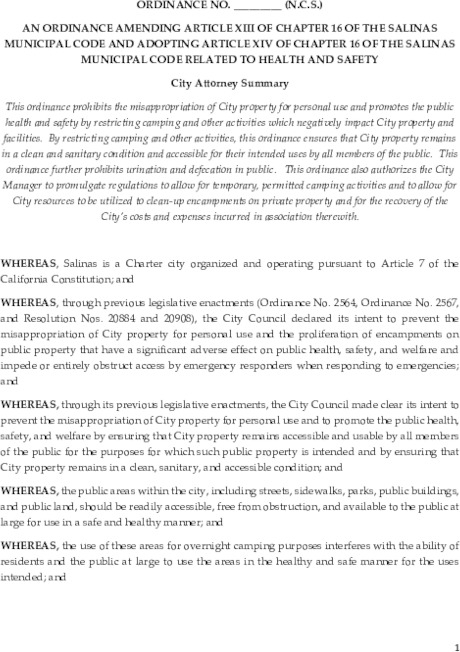 "It is unlawful and a public nuisance for any person to camp, establish, maintain, operate or occupy camping facilities, or use camp paraphernalia".

The ordinances bans camping on all sidewalks and on all city property.

Sleeping in a public place with a sleeping bag would be considered camping under the proposed ordinance. Sleeping bags are defined as "camp paraphernalia".

The definition of loitering in the proposed ordinance closely resembles what other cities have called a "sit-lie" law:

"No person shall stand, sit, linger, idle, or loiter on any street, alley, sidewalk, park or other public place, or in or about the entrance or exit of any business establishment or public building, either on foot or in an automobile or other vehicle, in such a manner as to obstruct or hinder the free passage of persons along such public way".

Lying on a public bench would also be prohibited under the proposed ordinance.

Under Sec. 16-140.070, a person is in violation of the ordinance if they continue to lie on a bench after being warned by a police officer not to do so.

This section of the ordinance would also ban walking, sitting, standing, or lying on "any monument."

The ordinance gives the following examples of what types of public features are considered a monument: decorative fountains, fire hydrants, planters, railings, fences, stairwells, and parking lots or parking structures.

The ordinance focuses on "camping" and "loitering" and does not mention the word "sleep".

If adopted by the Salinas City Council on Tuesday, the ordinance will go into effect one month later.
§Staff Report
by Salinas News Friday Sep 16th, 2016 9:32 PM 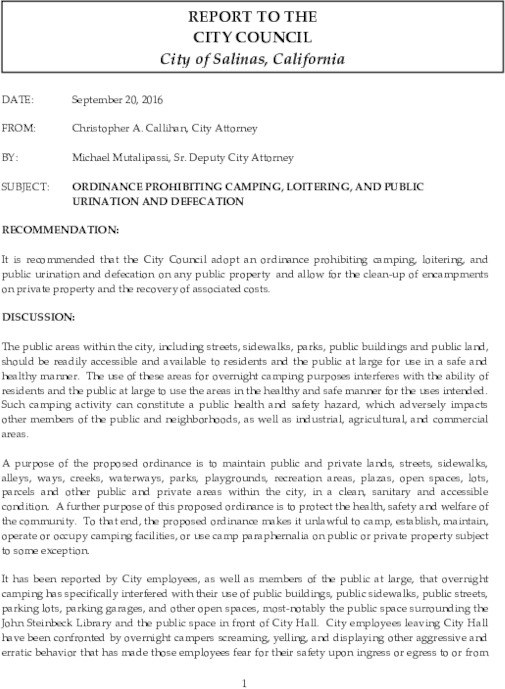 Speak Out Against the Proposed Camping/Loitering Ordinance at Salinas City Council Meeting
https://www.indybay.org/newsitems/2016/09/17/18791376.php
Add Your Comments
LATEST COMMENTS ABOUT THIS ARTICLE
Listed below are the latest comments about this post.
These comments are submitted anonymously by website visitors.