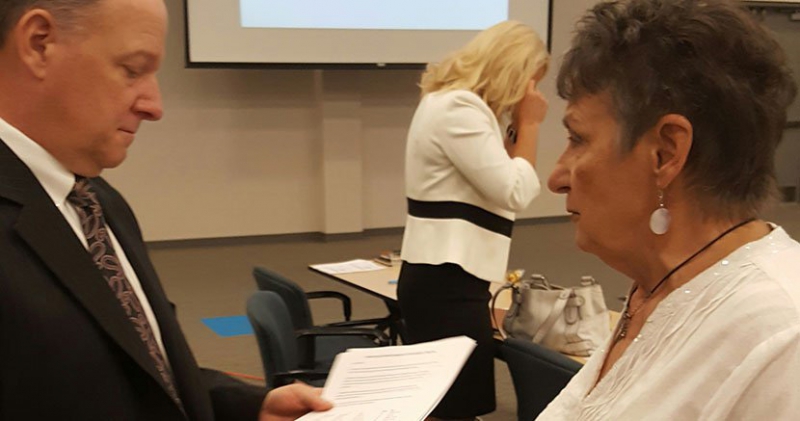 original image (830x437)
Philadelphia, PA, September 9, 2016 — Hundreds of Food & Water Watch activists are calling on state officials to drop investments in Energy Trust Partners (ETP), one of the companies behind the controversial Dakota Access Pipeline, which has been the target of ongoing protests in North Dakota.

The activists' petitions were delivered today to a Public School Employees’ Retirement System (PSERS) board of trustees meeting in Mechanicsburg.

As revealed by Philadelphia Daily News columnist Will Bunch, the Commonwealth of Pennsylvania is a major investor in the company, holding 5 million shares that are worth close to $200 million. Much of that is tied to PSERS, the pension fund for public school employees.

Protests against the Bakken oil pipeline are being led by local indigenous communities seeking to protect water supplies and tribal lands belonging to the Standing Rock Sioux Nation. Over the weekend, private guards used pepper spray and attack dogs against protesters.

"Our tax dollars should not be used to support climate catastrophe and the destruction of sacred land for oil company profiteering," said Sam Bernhardt, senior organizer at Food & Water Watch. "Governor Wolf and the PSERS board must seize this opportunity to send a powerful message of support for the Standing Rock Sioux Nation, and to repudiate the disgraceful tactics of this dirty energy corporation."

Ellen Gerhart, a retired special education teacher from Huntingdon County, is calling on PSERS to stop supporting the project. "I am appalled that my retirement pension is aiding and abetting a morally corrupt pipeline company (Energy Transfer Partners) that attacks peaceful protectors. The desecration of sacred ground of the Standing Rock Sioux Nation and the inevitable damage to the environment is horrific. PSERS must immediately divest any and all funds which support fossil fuel and pipeline companies. It is the only ethical choice."

On September 7, State Rep. Leanne Krueger-Braneky also called on PSERS to divest from the company, saying that Pennsylvania "cannot lower itself to enabling the type of jackboot thuggery we’re seeing in North Dakota."

Food & Water Watch
http://www.foodandwaterwatch.org/
Add Your Comments
Support Independent Media
We are 100% volunteer and depend on your participation to sustain our efforts!