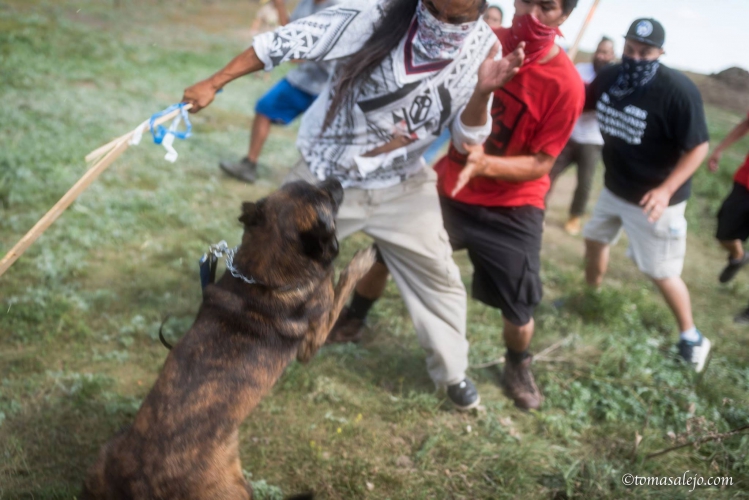 When do unions call in the National Guard to protect workers? It happened this past week in North Dakota where Standing Rock Sioux tribe and members of nearly 200 more tribes from across the U.S. and Canada brought 4,000 mostly Native people from throughout the United States to stop the desecration of their ancestor graves and the threat to their water resources by Dakota Access LLC. Dakota Access LLC is building a $3.8 billion dollar pipeline that would take 500,000 barrels a day through their lands on the way to Chicago. It is being built with 3,000 unionized operating engineers, plumbers, laborers and teamsters along the 1200 mile route. The Standing Rock Sioux tribe saw their ancestors burial grounds being desecrated and were concerned that their water supply would be contaminated in any possible spill going into the Missouri river which runs close to the pipeline.

The company Energy Transfer Partners (ETP) which controls Dakota Access LLC is owned by Texas billionaire Kelcy Warren. During Hurricane Warren through ETP stockpiled gas to gouge on prices after the hurricane passed and had to pay a $10 million fine for illegal manipulation of the energy industry.

The reaction by the unions to the growing protest was that there needed to be protection for their members so they could do their jobs. Glen Johnson, business manager for the International Union of Operating Engineers IUOE, said the unions had asked to meet with North Dakota Gov. Jack Dalrymple to” find out what the state intends to do about protesters causing workers to fear for their lives.”

Terry O’Sullivan, general president of LIUNA who makes over $663,000 a year had previously lauded the project “The men and women of LIUNA applaud the U.S. Army Corps of Engineers for its fair and thorough review of the Dakota Access Pipeline. … For the highly skilled and trained men and women of LIUNA, projects like the Dakota Access are more than just pipelines. They are crucial lifelines to family-supporting jobs,”

IUOE leader Johnson said that the governor might have to ” call out the National Guard, “so we can get through this volatile area. It’s appalling what’s going on.”

“Why isn’t the state protecting these workers from people throwing rocks, chasing them and wearing masks? If they’re not going to do anything and the company has to hire protective security and there are dogs out there, if they get bit, or whatever, hey, reality is reality,” he said. “Unions have supported peaceful protest, and we do it ourselves. When it’s violent, is when the law needs to step in — what, are we all supposed to be vigilantes and take the law into our hands?”

According to reporter Lauren Donovan of the Bismarck Tribune, the National Guard have already been deployed last week and was being used on Highway 1806 to shutdown the road with an information point. Some people were arrested and the action freed up the local police for other duties.

Native American activist Winona Laduke, who was a former Green Party vice presidential candidate, was clear about where the piping should be going. In an interview with Democracy Now’s Amy Goodman, Laduke said “Flint, Michigan, has a problem. That’s why everything is eroding in this country. And what we need is those skilled laborers to be put to work, pipelines for people. I’m saying take those pipes that are sitting there in northern Minnesota, and send them to Flint, Michigan.”

Johnson’s support for the use of trained dogs who bit dozens of people including children and even a pregnant women. The frenzy was so wild that some of the dogs were even biting each other. This raises the question about who Johnson is really representing. The use of dogs to bite civil rights protesters fighting segregation and racism in the south is notorious in US history and his open support for the use of these attack dogs by private security forces raises the question of what some unions would do to “protect” their jobs.

While these same unions and the AFL-CIO refuse to call for an end to the trillions of dollars that the US is spending on 700 bases overseas and at war and spending that money on the direly needed infrastructure in the US they are quite happy to support the use of the National Guard and attack dogs to protect their jobs.

Other unions spoke out in support of the Native peoples and against the threat to their lands. Larry Hanley the president of the Amalgamated Transit Workers Union ATU issued a statement condemning the attacks on Standing Rock Sioux and Opposes Dakota Access Pipeline.

“The Amalgamated Transit Union joins others in the Labor movement in condemnation of the ongoing violent attacks on the Standing Rock Sioux and others who oppose the Dakota Access Pipeline. These attacks by a private security company bring back horrific memories of the notorious Pinkertons, who used clubs, dogs and bullets to break up peaceful worker protests.

“Union members understand that today the greatest threat to jobs, health and decent living standards is climate change. We support the National Day of Action on September 13th, and we urge President Obama to stop construction of this destructive pipeline and keep dangerous fossil fuels in the ground.”

This capitulation to business interests and their agenda for “jobs” of course is not new for the history of business unionism in the US. In Oakland, the California Teamsters Union supported the development of shipping coal into the Port Oakland despite the health and safety dangers particularly in the African American and Latino communities. The ILWU which works the ship and the Alameda Labor Council opposed the coal port and they were successful in stopping it.

In California as well , anti-labor privatizers are spending tens of millions of dollars building charter schools with non-union labor and fighting unionization of the teachers and staff. In Richmond, the United Brotherhood of Carpenters Local 152 initially opposed a non-union charter run by former bankrupt vulture hedge fund operator Ron Beller and his wife Jennifer Moses. After education of teachers, community members and parents the school board was convinced not to sell an 8 acre site of the closed Richmond Middle School to Beller’s Caliber school. When Beller realized he needed labor support, he signed a letter of intent with the UBC to use unionized carpenters. The carpenters then mobilized their members to support the sale to Beller and also even made a banner outside the WSCCSB meeting supporting the sale.

The school board under pressure from the community and most of labor rejected the sale to Beller.

The lessons of these struggles and others is that workers and their unions need to break from the business union perspective that their jobs are more important than community and worker rights. Supporting privatization for short term gains is only weakening labor in the long run. Calling in the National Guard and the Army to “protect” union jobs from the community and Native Americans and their land is not only politically indefensible but is undercutting the fight against these companies who want to destroy our environment and break unions throughout this country and around the world.

The mobilization of Native Americans and other supporters is perhaps the largest political protest in North Dakota since the Non Partisan League which was formed in 1915 to fight the banks and railroads who were destroying the lives of the farmers in North Dakota. They even elected a governor and as a result of this political struggle, North Dakota still has a state bank that helps the people of the state. The political lessons for the working people of North Dakota and the country is that there is a political vacuum and the like the 1920’s the formation of a mass workers working class party that represents the Native Americans, farmers and workers including the trade unionists in the building trades is a pressing need.
http://www.counterpunch.org/2016/09/13/cal...
§Company Attack Dogs With Human Blood
by Steve Zeltzer Tuesday Sep 13th, 2016 5:11 AM 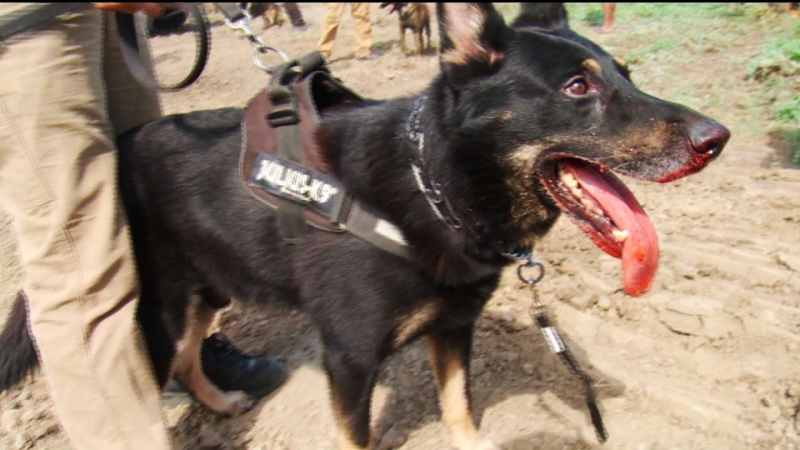 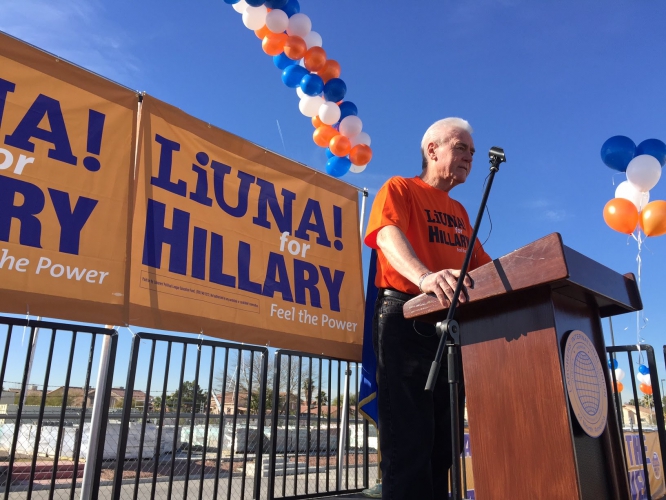 original image (1632x1224)
LIUNA international president who makes $663,000 a year supports the use of the North Dakota National Guard to protect building trades workers against thousands of Native American people from the US and Canada. He also is a big supporter of Hillary Clinton.
http://www.counterpunch.org/2016/09/13/cal...
§North Dakota National Guard Deployed To Stop Native Amerian Protest
by Steve Zeltzer Tuesday Sep 13th, 2016 5:11 AM 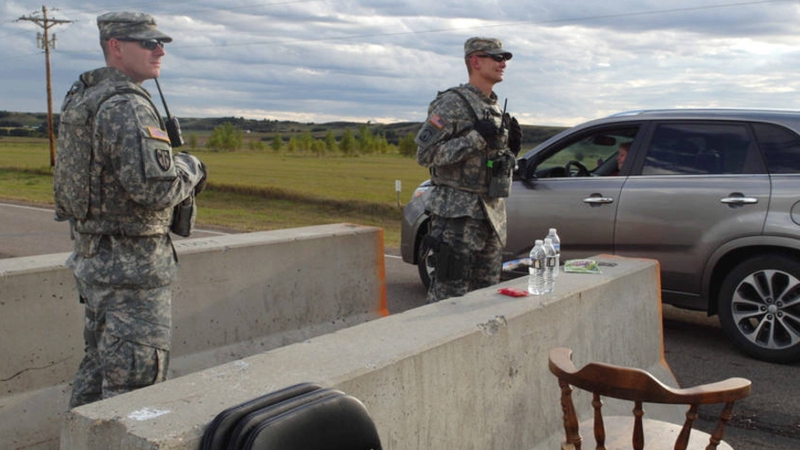 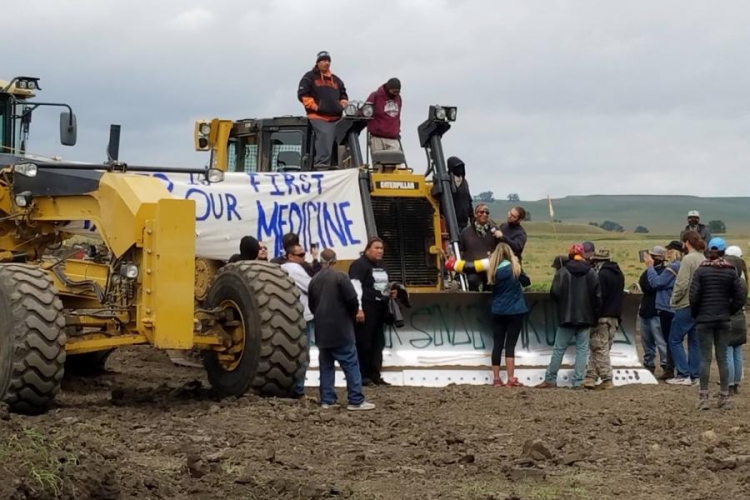 original image (900x600)
Native Americans and supporters of the Standing Rock Sioux land seized and incapacitated tractors and dozers that were being used to destroy their ancestral lands and burial sites as well as threatening the water supplies for their people.
http://www.counterpunch.org/2016/09/13/cal...
§Defend The Sacred
by Steve Zeltzer Tuesday Sep 13th, 2016 5:11 AM 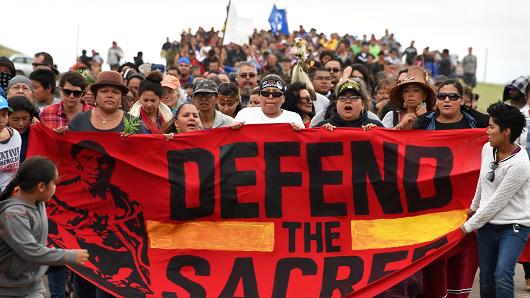 Native American people mobilized throughout the US and Canada to defend their sacred lands.
http://www.counterpunch.org/2016/09/13/cal...
Add Your Comments
Support Independent Media
We are 100% volunteer and depend on your participation to sustain our efforts!