by john Englart (Takver)
The nine point statement on the U.S.-China Climate Change Outcomes in Hangzhou China negotiated between Presidents Xi Jinping and Barack Obama outlined the growing bilateral cooperation between the US and China on climate policy in a number of meetings since 2013. (First outcome). 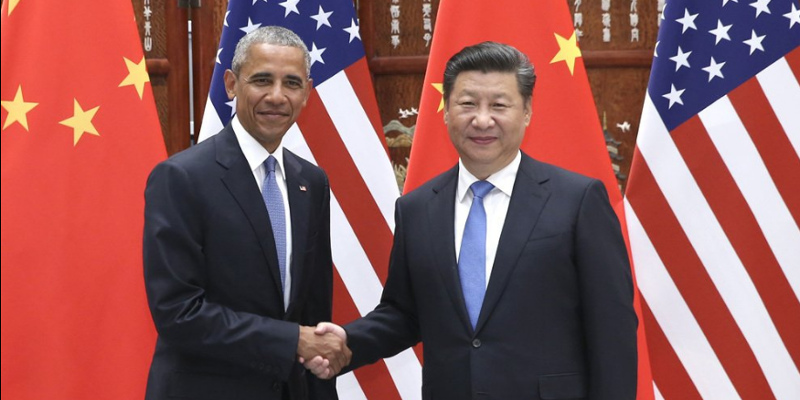 These bilateral negotiations should be widely welcomed. They proved to be an important stage setter for the Paris Agreement at COP21 in Paris which set in place for the first time a true international framework for reducing greenhouse gas emissions and dealing with climate change.

The formal occasion in Hangzhou China was used to lodge instruments of ratification of the Paris Agreement with UN Secretary General Ban Ki-Moon, and call for all other UNFCCC signatory countries to ratify the agreement this year. (Second Outcome)

Read more on this by me: China and the United States Ratify Paris Agreement on climate

The third outcome focussed on negotiating an ambituous amendment restricting HFCs as part of the Montreal Protocol. This treaty was established to slow down and reverse the destruction of the ozone layer in the atmosphere and has already had a noticeable impact. But some of the replacement refrigerant gases such as HFCs are also strong greenhouse gases. Improving efficiency standards and researching alternatives is important to transform the air conditioning industry use of refrigerants.

Why is this important? Because research shows that phasing out HFCs could save 0.5C of warming by the end of the century. (Xu et al (2013) - The role of HFCs in mitigating 21st century climate change (PDF)). It is clear that Phasing Down HFCs Under Montreal Protocol Can Cut Climate Pollution Twice Over (IGSD)

The fourth outcome dealt with aviation emissions. Emissions from aviation and shipping were not specifically mentioned in the Paris Agreement, despite their size as the 7th largest source of total global emissions and projected to rapidly increase. For the moment the International Maritime Organisation (IMO) and International Civil Aviation Organisation (ICAO) have the mandate for addressing emissions in this area, although Meinhard Doelle, a Professor in the Schulich School of Law at Dalhousie University argues that control of this sector's emissions could be brought under the UN climate regime if their efforts are seen as insufficient.

The United States EPA in July 2016 declared that jet engine exhaust endangers public health by contributing to climate change, announcing that it will work to develop regulations that will cut carbon emissions from commercial aircraft.

The International Civil Aviation Organisation (ICAO) Assembly, to meet from 27 September to 7 October 2016, has before it a plan for a global market-based measure (MBM) for international aviation emissions.

This amounts to an offsets program for civil aviation, a small step in the right direction but doesn't really reduce emissions. The proposal being put forward aims to cap the carbon pollution of all international flights at 2020 levels, but be voluntary between 2021 and 2026 and then mandatory from 2027 for the world's largest emitters. Airlines that exceeded their cap would need to buy carbon credits from designated environmental projects. China and the US support the first, voluntary, phase. Mexico, Canada and Indonesia have said they would join, and now the European Union have agreed to join the aviation emissions pact (This includes 16 surrounding countries including Turkey, Ukraine and Georgia).

The fifth outcome celebrated the US-China partnerships in Climate Change Working Group (CCWG) and U.S.-China Clean Energy Research Center (CERC), and the U.S.-China Climate-Smart/Low-Carbon Cities Summits in 2015, 2016 and the upcoming summit in Boston in 2017.

The sixth outcome reiterated and committed both countries "to continue taking ambitious domestic action to further promote the transition towards green, low-carbon and climate-resilient economies both domestically and internationally."

US efforts for greenhouse gas reduction

The seventh outcome dealt with US domestic climate policy and greenhouse gas reduction including:

The ninth and final outcome dealt with climate finance and investment, including limiting export finance for coal-fired power stations.

It described how the United States worked with other OECD member countries in 2015 to adopt new OECD guidelines to limit export finance for overseas coal-fired power plants.

Unfortunately Japan, Korea and Australia were able to insert exceptions in these guidelines to allow for 'high-efficiency' coal power stations to still be financed and built. Australia did this to ensure a market for coal. Japan wanted the exceptions has it has developed these 'high efficiency' coal technology processes. And Korea is big in financing coal power. PhD student Marc Hudson had an illuminating background paper on this on OECD coal subsidies decision, or read Luke Kemp at The Conversation on how the OECD agreement deals another blow to coal worldwide.

On climate finance, the United States remains committed to the goal now enshrined in the Paris Agreement of jointly mobilizing 100 billion US dollars per year by 2020 to address the needs of developing countries in the context of meaningful mitigation and adaptation action.

But really this amount is just a drop in the bucket needed to support adaptation and mitigation action across the many developing nations. Climate economics researchers Alex Bowen, Emanuele Campiglio & Sara Herreras Martinez in a 2015 study published in Climate Policy called An ‘equal effort’ approach to assessing the North–South climate finance gap (abstract), estimated that an equitable North–South annual financial transfer of around US$400 billion (4 models) to $2 trillion (2 models) may be required by 2050. That $100 billion commitment looks rather low in comparison and should under the principles of fairness and equity be quadrupled as part of the climate debt by industrialised countries.

China undertook in this outcome to strictly control public investment flowing into projects with high pollution and carbon emissions both domestically and internationally.

The bilateral outcome between the US and China was completed as a precursor to the G20 nations heads of state forum. No doubt this bilateral will spurr major discussion at the G20 on climate action and the Paris Agreement, as it should do.

Research by Climate Transparency in their Report for China Presidency 2016 shows an enormous Emission reductions gap between G20 nation plans (INDCs) and the Paris Agreement temperature targets. The INDCs only cover 15 percent of the reduction needed for moving to a 2 degrees C decarbonisation trajectory. To keep within a 2 degrees C trajectory, the G20 nations need to increase 2030 climate action at least six fold more than the plans that are currently registered with the UNFCCC.

The report recommendations to the G20 nations were for: 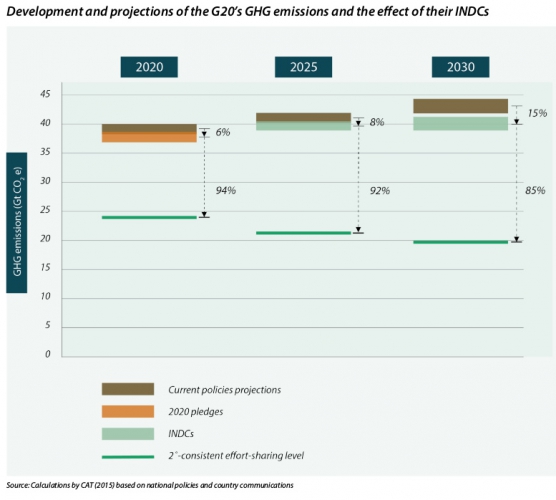 original image (777x698)
There is still so much to do for G20 nations to ramp up emission cuts and climate action.
Add Your Comments
Support Independent Media
We are 100% volunteer and depend on your participation to sustain our efforts!