Add an Event
Newswire
Calendar
Features
Home
Donate
From the Open-Publishing Calendar
From the Open-Publishing Newswire
Indybay Feature
Publish to Newswire
Add an Event
Related Categories: California | Central Valley | Environment & Forest Defense | Government & Elections
Consumer Watchdog slams Jerry Brown over receiving $9.8 million in fossil fuel donations
by Dan Bacher
Monday Aug 15th, 2016 5:27 PM
In over 30 years of covering fish, water, conservation and environmental justice in California, this is one of the most significant and disturbing reports about regulatory capture and “play to pay" politics I have ever read. 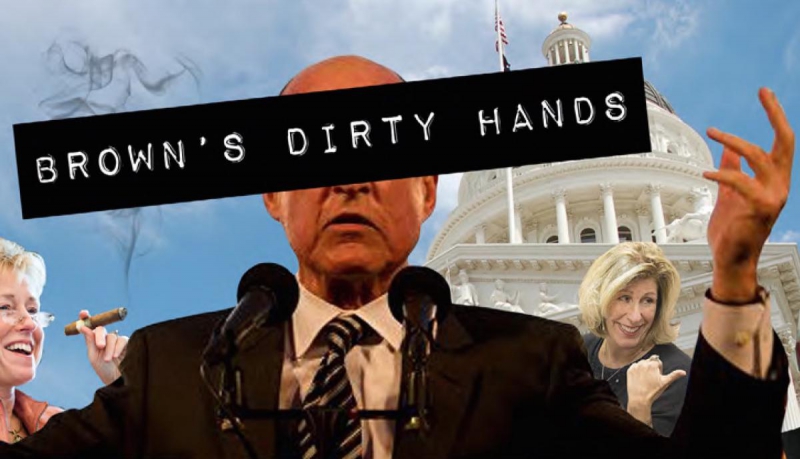 Consumer Watchdog is known for following the Big Money, especially fossil fuel money, and its impact on California politics. The report’s findings challenge the hypocrisy of Brown's continual posing as a “climate leader” as his administration makes decision after decision favoring the fossil fuel industry and utilities.

“The timing of energy industry donations around important legislation and key pro-industry amendments, as well as key regulatory decisions in which Brown personally intervened, raises troubling questions about whether quid pro quos are routine for this administration,” said consumer advocate Liza Tucker, author of the report, in a press release. “While Brown paints himself as a foe of fossil fuels, his Administration promoted reckless oil drilling, burning dirty natural gas to make electricity, and used old hands from industry and government, placed in key regulatory positions, to protect the fossil fuel-reliant energy industry.”

After releasing the report online at 10 am, Consumer Watchdog President, Jamie Court, and Executive Director, Carmen Balber, held a press conference in Santa Monica at 10:30 am. They discussed the report and answered questions from media participating in the event.

As they talked, they displayed visuals, including a timeline chart detailing the money in and the favors out and a photo chart of Brown Administration energy industry Insiders who executed the favors.

You can view a short video summarizing the report here: https://www.youtube.com/watch?v=3t0ZgT-ahLg

The report claims that twenty-six energy companies including the state’s three major investor-owned utilities, Occidental, Chevron, and NRG—all with business before the state—donated $9.8 million to Jerry Brown’s campaigns, causes, and initiatives, and to the California Democratic Party since he ran for Governor.

“Donations were often made within days or weeks of winning favors,” the group said. “The three major investor-owned utilities alone contributed nearly $6 million.”

Court said it is forwarding its report to the Fair Political Practices Commission (FPPC).

I am waiting to a response to my request for a comment about the Consumer Watchdog report from the Governor's Office.

In response to the report, Brown spokesman Evan Westrup told the San Diego Union Tribune, “The governor’s leadership on climate is unmatched. These claims are downright cuckoo.”

“Westrup cited a host of Brown policies and decisions since he was elected in 2010 that were aimed at protecting the environment," the publication said. (http://www.sandiegouniontribune.com/news/2016/aug/11/brown-consumer-watchdog/)

Consumer Watchdog strongly disagrees that these claims are "downright cuckoo.”

“Evidence strongly suggests that the timing of certain donations may have elicited or rewarded legislative or regulatory action on behalf of these companies," said Court.

Among the most “egregious examples” detailed in the report are the following, according to Consumer Watchdog's summary:

• ”Southern California Edison donated $130,000 to the California Democratic Party, its largest contribution up until that time, on the same day PUC President Michael Peevey cut a secret deal with an SCE executive in Warsaw, Poland to make ratepayers cover 70 percent of the $4.7 billion cost to close the fatally flawed San Onofre nuclear plant. Brown backed the dirty deal, telling Edison’s CEO personally, according to an email from the CEO uncovered by the Public Records Act, that he was willing to tell the media on the day of the plant’s shuttering that the company was acting responsibly and focused on the right things. Three days prior to SCE’s announcement that it would close San Onofre permanently, the company donated $25,000 to the California Democratic Party

• Emails from PG&E’s top lobbyist Brian Cherry to his boss claim that Brown personally intervened with a PUC Commissioner to persuade him to approve a natural gas-fired power plant called Oakley for the utility. In a January 1, 2013 email, Cherry described a New Year’s Eve dinner with Peevey where Peevey reminded him “how he and Governor Brown used every ounce of persuasion to get [Commissioner Mark] Ferron to change his mind and vote for Oakley…Jerry’s direct plea was decisive.” PG&E donated $20,000 to the California Democratic Party the day after the PUC voted for the project. An appeals court would later strike down the decision because PG&E had not proved its necessity.

• While PG&E’s lobbyist and then-PUC President Michael Peevey fed names to Brown’s executive secretary, former PG&E vice president Nancy McFadden, to appoint the critical swing-vote PUC commissioner who would cast pro-utility votes, PG&E donated $75,000 to the California Democratic Party. The same day that Brown appointed ex-banker Mark Ferron to the commission, PG&E donated another $41,500. The appointment lifted the value of PG&E’s stock and the PG&E stock held by McFadden and valued as high as $1 million.

• Chevron donated $135,000 to the California Democratic Party the same day lawmakers exempted a common method of well stimulation from legislation meant to regulate fracking. After the bill passed with an amendment dropping a moratorium on fracking permits, Occidental gave $100,000 to one of Brown’s favorite causes, the Oakland Military Institute. Brown signed the weakened bill. On December 23, 2013, Chevron donated $350,000 to the Democratic Party. On December 30, the Democratic Party donated $300,000 to Brown for Governor 2014, while Chevron donated the maximum to Brown’s campaign, $54,400, on the same day. Less than two months later, Brown came out publicly to oppose a proposed oil severance tax. The weakened fracking bill also helped Nancy McFadden who held up to $100,000 in Linn Energy that would acquire Berry Petroleum and its 3,000 California fracking wells.

• Power plant developer NRG wasn’t a Brown donor until the company cut a sweetheart deal with the PUC to settle the state’s case over its 2001 electricity price manipulation, touted as a win by the Governor’s office. Rather than paying back the state, the company was allowed to spend $100 million of its $120 million fine to build electric vehicle charging infrastructure. Two months later, NRG began donations to Brown, his causes, and his party that would come to $105,000. A lawsuit against the PUC, filed by electric charging station competitor Ecotality, called the deal illegal because it awarded a monopoly to an out-of-state company.

• Lawmakers sent Brown a package of six PUC reform bills in 2015 which would have increased oversight, transparency and accountability at the PUC, and received unanimous, bipartisan support. Brown vetoed the reform bills on October 12, 2015. One week later, PG&E donated $50,000 to the Democratic Party. In December, PG&E donated another $175,000 to the Party.

Jerry Brown’s family and other personal ties to industry insiders also appear to play a role in his Administration’s decisions to promote the interests of the utilities and the oil and gas industry at the expense of consumers.

Brown’s sister, Kathleen, was given a seat on Sempra’s board of directors in June 2013, just as lawmakers amended fracking legislation to drop a moratorium on fracking permits. As of April 2016, Kathleen Brown had earned $691,300 for her board service at Sempra, parent company of Southern California Gas which is responsible for the massive Aliso Canyon natural gas well blowout that caused the biggest methane leak in U.S. history. Governor Brown issued an emergency order that ensured secrecy around the blowout investigation, has waged a campaign through his energy regulators to keep Aliso open and has kept information and data involving the blowout secret from the public. Sempra stock has increased by 116% since Brown took office, more than any other utility.

Kathleen Brown also served on the board of real estate and oil company Forestar Group—which owns 700 acres next to Porter Ranch, a community drastically affected by the leak, where Forestar plans to build luxury homes, and another 1,000 acres of oil and gas interests in California. Kathleen holds $749,000 worth of Forestar stock. She now sits on the board of Renew Financial, a private funder of renewable energy projects that stands to benefit from SB 350. She stepped down from Forestar one month after Jerry Brown declared a state of emergency at Aliso Canyon.

Governor Brown supported, appointed and hired a group of old hands from previous administrations and the energy industry that have played a role in policies promoting the fossil-fuel natural gas system. Brown’s Dirty Hands details how the revolving door of industry insiders, including former PUC President Michael Peevey, now under criminal investigation for corruption at the PUC, was supported and installed by Brown and his top aides. The report details crucial moments for the energy industry contributors through the Administration’s course and how Brown sided with them."

A number of the examples of Brown administration service to the fossil fuel industry documented in this report have been published in articles covered by the mainstream and alternative media, including articles I have written. However, this is the first time that anybody has combined the many examples of how oil, gas and utilities gave millions to Governor Jerry Brown and his causes, often within days of winning big favors, in one comprehensive report.

In over 30 years of covering fish, water, conservation and environmental justice in California, this is one of the most significant and disturbing reports about regulatory capture and “play to pay" politics I have ever read.

Brown's service to the fossil fuel industry, as documented in the Consumer Watchdog report, is just one of the many anti-environmental policies of the Brown administration that I have covered in article after article.

The Governor is promoting as his legacy the Delta Tunnels/California Water Fix, the most environmentally destructive public works project in California history that poses a huge threat to the ecosystems of the Sacramento, San Joaquin, Klamath and Trinity river systems. As Brown relentlessly pushes the tunnels plan, his administration is overseeing water policies that are driving winter run-Chinook salmon, Delta and longfin smelt and other species closer and closer to extinction.

Jerry Brown also oversaw the “completion” of so-called “marine protected areas” under the privately funded Marine Life Protection Act (MLPA) Initiative, overseen by Catherine Reheis-Boyd, President of the Western States Petroleum Association (WSPA) and other corporate interests, in December 2012. These faux “Yosemites of the Sea” fail to protect the ocean from oil drilling, fracking, pollution, corporate aquaculture and all human impacts on the ocean other than sustainable fishing and gathering.

As if those examples of Brown’s tainted environmental legacy weren’t enough, Brown has promoted carbon trading and REDD policies that pose an enormous threat to Indigenous Peoples around the globe; has done nothing to stop clearcutting of forests by Sierra-Pacific and other timber companies; presided over record water exports from the Delta in 2011; and oversaw massive fish kills of Sacramento splittail and other species in 2011.

Brown may spout “green” rhetoric when he flies off to climate conferences and issues proclamations about John Muir Day and Earth Day, but his actions and policies regarding fish, water and the environment are among the worst of any Governor in recent California history.

For more information about the real environmental record of Governor JerryBrown, go to: http://www.dailykos.com/story/2016/3/25/1506146/-Govenor-Jerry-Brown-Celebrates-World-Water-Day-As-He-Promotes-Salmon-Killing-Delta-Tunnels