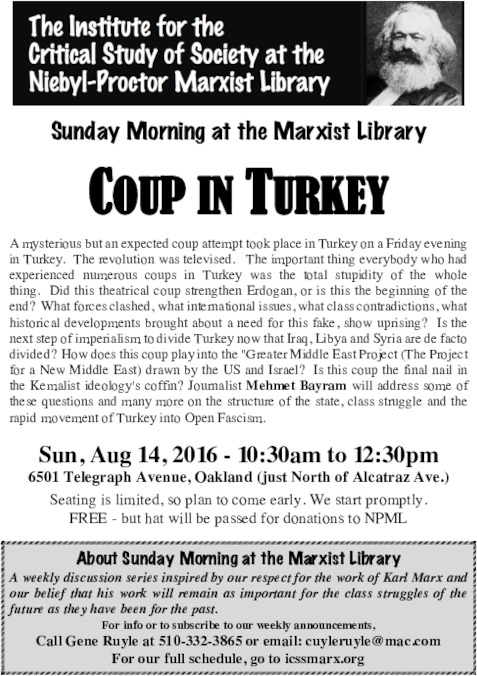 A mysterious but an expected coup attempt took place in Turkey on a Friday evening in Turkey.  The revolution was televised.   The important thing everybody who had experienced numerous coups in Turkey was the total stupidity of the whole thing.  The military sent tanks to hold only some of the lanes in the most congested bridge in the country, and the tanks were stuck in traffic by people going out to drink.  The most central park was held by 30 soldiers.  And the government TVs, internet, Mosques and the entire media was allowed to broadcast governments calls for the people (jihadists) to rise up against the coup.  In the end, the government and the small time dictator Erdogan obtained a much needed and cheap victory.  Even before the coup attempt fizzled Erdogan's oppression started.  The list of high ranking officers and judiciary who had not knelt  down before Erdogan, apparently already at hand for many years, were immediately either fired or arrested.  By the end of the next day 6,000 officers and judiciary were arrested, to be replaced by Erdogan's worshiper.  Did this theatrical coup strengthen Erdogan, or is this the beginning of the end?  What forces clashed, what international issues, what class contradictions, what historical developments brought about a need for this fake, show uprising?  Is the next step of imperialism to divide Turkey now that Iraq, Libya and Syria are de facto divided?  How does this coup play into the "Greater Middle East Project (The Project for a New Middle East)" drawn by the US and Israel?  Is this coup the final nail in the Kemalist ideology's coffin?
Journalist Mehmet Bayram will address some of these questions and many more on the structure of the state, class struggle and the rapid movement of Turkey into Open Fascism.

END_OF_DOCUMENT_TOKEN_TO_BE_REPLACED
Added to the calendar on Fri, Aug 5, 2016 10:21AM
Related Categories: East Bay | Global Justice & Anti-Capitalism
Add Your Comments
Support Independent Media
We are 100% volunteer and depend on your participation to sustain our efforts!