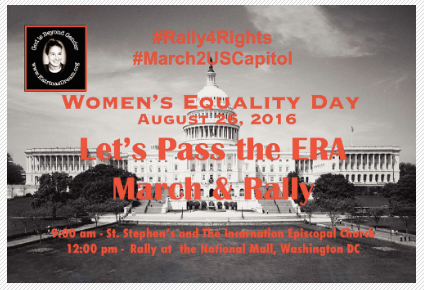 The rally is being held to mobilize all people to Pass the Equal Rights Amendment (ERA). The day will start in silence, meditation, and prayer at 8:00 am at St. Stephen’s and the Incarnation. Many will meet following the service at 9:30 am to begin there walk in peaceful contemplation taking the same path that many feminist took on August 26, 2015 at the first march and rally. Others will join up around 11:30 am the White House and proceed to the US National Mall where the rally will begin at 12:00 noon.

At the rally speakers will talk about the intersectionality of racism and sexism, and systemic issues that the ERA would address. They will share their wisdom and personal experiences on the Racial Gender Pay Gap, women’s health care, violence and the rape culture women live with everyday.

The ERA is a US Constitutional Amendment that would empower all women and provide for gender equality. The ERA is the unfinished business of the Civil Rights Movement.

Swanson, an aspirant for the priesthood, co-founded Katrina’s Dream in memory of her late mother-in-law, the Rev. Katrina Martha Van Alstyne Welles Swanson. Katrina was one of the 11 women irregularly ordained to the priesthood in 1974, becoming the U.S. Episcopal Church’s first female priests. When the ERA failed to be ratified by the necessary 38 states, Katrina began to recite the Pledge of Allegiance “with Liberty and Justice for SOME!” When questioned “Why ‘some”? she would reply, “Because the ERA was voted down, retired women are more likely to live in poverty than men.”

On March 8, 2014 Helene Swanson left from Golden Gate Bridge, San Francisco, California to make a spiritual pilgrimage to promote the passage of the Equal Rights Amendments. Swanson covered over 7,000 miles (10,000 kilometers) as she made her way traveling through the 15 states that have yet to ratify the ERA. Often Helene slept roadside, at strangers and supporters homes alike, and places of worship.

Along the way she met with US Senators and Representative urging them to support the “Three State Strategy” resolutions that US Representative Jackie Speier and US Senator Ben Cardin as lead sponsors have been working on in our US Congress. At these meeting many leading feminist across the country joined in demanding that they co-sponsor these resolutions.

On August 26, 2015 a number of feminist joined Swanson on her last four miles to the US Capitol and rallied for the Equal Rights Amendment. That herstoric day and rally has morphed into an annual event.

END_OF_DOCUMENT_TOKEN_TO_BE_REPLACED
Added to the calendar on Wed, Aug 3, 2016 2:12PM
Related Categories: U.S.
Add Your Comments
Support Independent Media
We are 100% volunteer and depend on your participation to sustain our efforts!