Add an Event
Newswire
Calendar
Features
Home
Donate
From the Open-Publishing Calendar
From the Open-Publishing Newswire
Indybay Feature
Publish to Newswire
Add an Event
Related Categories: California | Central Valley | Environment & Forest Defense | Government & Elections
Legal victory by fishing groups could 'pull rug out' from Delta Tunnels plan
by Dan Bacher
Tuesday Aug 2nd, 2016 6:37 PM
“This ruling pulls the rug out from underneath the Governor’s so-called WaterFix project because the WaterFix assumes incorrectly that Reclamation must strive to deliver the ‘full contract amounts’ under its interim contracts," said Stephan Volker, attorney for the two organizations. "That assumption violates federal law, as the Ninth Circuit clearly holds in this ruling." 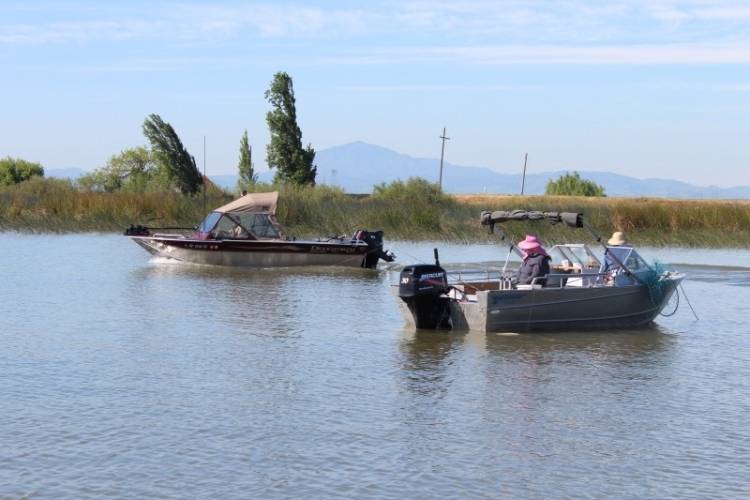 Two fishing groups won a major legal victory last week against the federal government and agribusiness interests when the Ninth Circuit Court of Appeals overturned Delta water contracts with the Westlands Water District and other irrigators.

The ruling by the three-judge panel could throw a major obstacle in the path of Governor Jerry Brown’s Delta Tunnels Plan, the California WaterFix project, since it “assumes incorrectly” that the federal government must strive to deliver the “full contract amounts” to San Joaquin Valley agribusiness under its interim contracts, according to the groups.

On July 25, the Court ruled in favor of the Pacific Coast Federation of Fishermen’s Associations (PCFFA) and the San Francisco Crab Boat Owners Association in their long legal battle with the U.S. Bureau of Reclamation and San Joaquin Valley corporate agribusiness operations that divert millions of acre feet of water annually from the Sacramento-San Joaquin Delta, the largest estuary on the West Coast of the Americas.

After four years of court proceedings, the Court of Appeals ruled that the Bureau of Reclamation had violated the National Environmental Policy Act (NEPA) “by failing to consider reducing the quantity of water diverted from the Delta for farming uses and increasing the Delta’s fresh water flows to San Francisco Bay to restore its imperiled salmon and wildlife," according to a press release from the Law Offices of Stephan Volker, attorney for the two organizations.

“The Court held that in approving eight 2-year contracts for the delivery of up to 1.2 million acre feet of water annually from the Delta to Central Valley water districts, Reclamation had failed to consider the alternatives of reducing the quantity of water delivered, or terminating the contracts altogether and delivering no water,” according to the statement.

The Court stated that “Reclamation’s decision not to give full and meaningful consideration to the alternative of a reduction in maximum interim contract water quantities was an abuse of discretion.” (Opinion at p. 6.)

The Court “reject[ed] Reclamation’s argument that the contracts themselves mandated [their] renewal,” pointing out that “NEPA imposes obligations on agencies” to consider less impactful alternatives, and Reclamation “may not evade these obligations by contracting around them.” (Opinion at p. 5.)

The Court also rejected Reclamation’s arguments that reducing the quantity of water delivered under the contracts was infeasible, and agreed with the Fishing Groups that “Reclamation acted unreasonably by relying on stale water needs data,” according to the release. (Opinion at p. 7.)

The fishing groups had pointed out that Reclamation “had improperly assumed that irrigation water still needed to be delivered to vast tracts of land contaminated by selenium and other pollutants in the western and southern San Joaquin Valley.”

The two commercial fishing organizations were elated about the Court’s ruling.

“The Court’s decision sends the message that NEPA requires federal agencies to consider alternatives that would reduce the environmental impact of their actions," said PCFFA Executive Director Tim Sloane.

He emphasized, “We are running out of time to save our salmon. Populations are crashing and commercial fishermen are losing their livelihoods. Reclamation’s refusal to consider reducing diversions of water from the Delta in order to save our fish from extinction was irresponsible, and its decision to do so without complying with NEPA was simply outrageous.”

Attorney Stephan Volker stated that “the courts have once again come to the rescue of the Bay-Delta and its beleaguered fisheries. We commend Judges Silverman, Fisher and Tallman for their courageous action in upholding the law and enforcing NEPA’s lofty requirements.”

“This ruling pulls the rug out from underneath the Governor’s so-called WaterFix project, because the WaterFix assumes incorrectly that Reclamation must strive to deliver the ‘full contract amounts’ under its interim contracts. That assumption violates federal law, as the Ninth Circuit clearly holds in this ruling,” Volker concluded.

Nancy Vogel, the spokesperson for the California Natural Resources Agency, disagreed with Volker’s contention that the ruling “pulls the rug out” from underneath the California WaterFix.

She added, “Nonetheless, it is worth noting that through the 10-year evolution of our proposed project, we considered various options including reduced deliveries from the State Water Project and the Central Valley Project. Those options were screened out for reasons that include a failure to meet the dual goals defined by the Legislature as providing a more reliable water supply for California and protecting, restoring, and enhancing the Delta ecosystem. California WaterFix would help to prevent further erosion of water project deliveries while improving conditions for native fish.”

The Bureau of Reclamation declined to comment on the ruling. “Because this is still being processed, Reclamation does not have comments at this time, said Wilbert "Louis” Moore, Deputy Public Affairs Officer for Reclamation.

For more information, go to: https://mavensnotebook.com/2016/08/01/fishing-groups-win-lawsuit-to-overturn-delta-water-delivery-contracts/

Recreational fishing groups joined commercial fishing groups in praising the decision. “It has taken a while, but the lawsuits are starting to work,” said Jim Cox, retired sportfishing captain and President of the State Board of the California Striped Bass Association. “This is a big win for our side.”

The Appeals Court ruling was preceded on June 24 by Sacramento Superior Court Judge’s widely-celebrated decision to toss out the Delta Plan, a central component of Governor Brown's Delta Tunnels project, because the plan was “invalid.”

In that decision, Judge Michael Kenny said: “To be clear, the Delta Plan is invalid and must be set aside until proper revisions are completed. As Respondent itself argued previously, in light of an invalid Delta Plan, there is no proposed project, and consequently nothing before the Court to review under CEQA. The Court does not believe that piece-meal CEQA review is feasible under circumstances in which significant Plan revisions are required.”

“The court invalidated the Delta Plan because it blatantly failed to comply with the law and, consequently, was not protective of the Delta The Plan failed to mandate specific requirements that would reduce reliance on the Delta, provide for more natural flows, reduce harm from invasive species or increase water supply reliability though increased regional self-sufficiency,” said Jennings.

Meanwhile , the State Water Resources Control Board is currently conducting hearings on the petition of the Department of Water Resources and Bureau of Reclamation requesting permits for new water diversion intakes on the Sacramento River and water quality certification under the Clean Water Act (CWA). These are essential permits required before the Delta Tunnels can be constructed — and public trust advocates are doing their best to make sure that these permits are not granted.

A broad coalition of commercial and recreational fishermen, Tribal leaders, conservation group leaders, family farmers, environmental justice advocates, Delta residents, Southern California water ratepayers and elected officials opposes the Delta Tunnels because they say it would lead to the ecological destruction of the San Francisco Bay Delta. In addition to hastening the extinction of Central Valley steelhead, Sacramento winter-run Chinook salmon, Delta and longfin smelt, green sturgeon and other fish species, they also say the project will also imperil the salmon and steelhead populations on the Trinity and Klamath rivers.
Add Your Comments
Support Independent Media
We are 100% volunteer and depend on your participation to sustain our efforts!