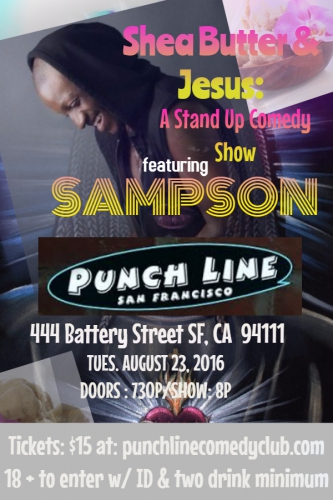 SAN FRANCISCO, CA- If the current election season doesn’t make the case for the issues of parts of the country being at odds over the current state of race relations and the lack of acceptance of diversity, then perhaps the lack of LGBT, women and people of color in television, stage, media and film also reinforces the fact that opportunities for minorities are scarce—particularly in entertainment, and in this case, stand-up comedy.

On the heels of a promotional tour for his new documentary film “A Tough Act To Follow”, which focuses on homophobia, sexism and the lack of opportunities for minorities in comedy, Sampson McCormick, (Sampson), a black, LGBT comedian and activist continues to tour to promote the visibility of people of color and queer comics onstage.

The veteran comic, who is considered a pioneer, and has been performing around the country for well over a decade, will present a concert show “Shea Butter & Jesus: A Stand Up Comedy Show featuring Sampson” to the San Francisco Punch Line Comedy Club 444 Battery Street San Francisco, CA 94111 on Tuesday August 23, 2016 Doors at 730PM Showtime at 8PM.
Additionally, as the show promotes visibility and diversity on the stand-up stage, topics of the evening will focus on current political, social and news events, and a myriad of other issues of the day.
Tickets are: $15 and can be purchased at http://www.punchlinecomedyclub.com or calling (415) 397-7573

About the headliner: Sampson is an experience, a down to earth comedic force of nature, and one of the most celebrated LGBT comics working. Named “One of the 12 Queer Comics That You Should Know” by OUT Magazine, and “One of the Funniest LGBT Comics” by The Advocate, Huffington Post and Buzz Feed, he’s appeared on MTV, TV One, Bravo, and his comedy special “That B*@&! Better Be Funny”.
His comedy offers fresh and riveting takes on sexuality, race, religion and politics—you know… all the things you aren’t supposed to talk about in polite company.

END_OF_DOCUMENT_TOKEN_TO_BE_REPLACED
Added to the calendar on Wed, Jul 27, 2016 10:51PM
Related Categories: San Francisco | Arts + Action
Add Your Comments
Support Independent Media
We are 100% volunteer and depend on your participation to sustain our efforts!