by zh
Houseless activist Lucero Luna shares her experience in Santa Cruz city jail and protests against laws criminalizing poor and houseless people within the city. 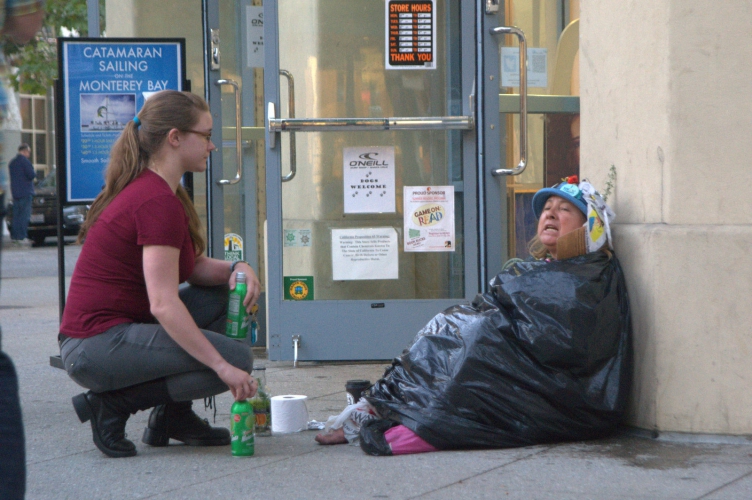 As she walked the sidewalks of downtown Santa Cruz, houseless activist Lucero Luna explained her clothing.

“I'm dressed in a garbage bag to make a point. They [the tourists] can't tell the difference between the metal trash can and me,” said Lucero. She insisted that people walk by her and other houseless people as though they were otherwise normal pieces of sidewalk infrastructure, like a trash can or bench.

Lucero has been involved in activism in Santa Cruz for some time now. She is a veteran of the weekly event at city hall put on by a group called the Freedom Sleepers, a group of housed and unhoused people who sleep Tuesday nights at the seat of government to protest the city's camping ban law. The law – Municipal Code 6.36.010 – makes it a crime to sleep outdoors between 11pm and 8:30am or to appear to set up a camp at any time of the day. The Freedom Sleepers protest has happened weekly since July 4 of 2015.

Lucero was arrested on Pacific Avenue last Tuesday afternoon, specifically because she violated the downtown's laws against sitting down or lying on the sidewalk. Some houseless activists and advocates accuse the city of discriminatory enforcement around these laws, saying that police and security guards target people who appear to live on the street, but ignore those who appear to be tourists or housed residents of Santa Cruz.

When SCPD arrived in front of the Forever 21 store on Pacific Avenue to cite her, Lucero outright refused to sign her ticket and demanded that she see a judge. The police promptly arrested her and carted her off to the local jail on Water Street. She described her experiences in the jail.

“I was placed in a solitary cell. There were dried blood and other stains on the walls, and nowhere to sit except the damn toilet or the floor,” she laughed, “so I stayed on the toilet and flushed it every time the guard walked by, make them see I'm using my seating! I don't care.”

“The jail was full,” Lucero said, “people were sleeping on mats on the floor. When they decided to let me go in the evening, I told them I'd be back. They said no. I said yes because I need SOMEWHERE legal to sleep!”

Lucero wore perfume to her protest on Friday night, for her “sisters back in jail.” She explained that, “when I went in Tuesday, I met the women who are there for a long time. Some of them have been there two or even four years. I felt bad because there's no privacy. When I had to use the toilet in a public area, the other people were there eating their dinner. I had held it for so long but I had to go! I said to them I'm sorry, I'm sorry. They said they didn't mind, they were used to it.”

She smiled, “One of the women came to me and smelled me and she said, 'Ohhh, you smell so good!' because they don't get to have any of the things like perfume in there. So I wore perfume for them so if I went back in they'd get to smell it!” She laughed again.

Lucero's protest took place Friday in front of the O'Neill store on Cooper Street. Dressed in a garbage bag and with plastic shopping bags tied around her feet, she began by lying on the metal sculpture across from the store. After a short while there, Lucero moved to the sidewalk in front of the shop and kneeled as if in prayer. She steadily moved closer to the doors, eventually lying down before them and napping with her hat over her eyes.

People who passed by showed a range of reactions. Some appeared confused, some disgusted, and some simply concerned. One person walked gingerly over and placed a rolled up dollar bill by Lucero's head, though she was the only among dozens to do so. An employee from O'Neill eventually came out to speak to this reporter, who informed them that the person lying on the ground in front of the store was doing so as a political protest.The O'Neill employee expressed some relief and said that there wasn't a problem so long as she didn't harrass people who walked by.

Lucero next moved to lean against the wall by the door to the shop. She sat up straight and called out to people in the O'Neill store, “I'm reclaiming public space for the right to sleep!” She also asked people who passed on the sidewalk for empty alcohol bottles, saying, “Let's raise the bar, I want to break some more codes! Let's get the police here!”

One person stopped and offered her a melon soda and asked if she was alright. Lucero calmly explained her purpose to them, “I'm out here because I'm houseless, you know? It's illegal for me to sleep anywhere so I have to be out here protesting.” The person expressed ongoing concern, but left soon after Lucero continued shouting to passers by. The same O'Neill employee who had come out earlier again emerged from the store to ask this reporter if she could stop yelling and that they had called the police.

Three SCPD officers arrived soon – one in a bulletproof vest - and gathered around Lucero at the door to the O'Neill shop. A crowd gathered as well. One worried person said to their companion, “Uh oh. Get your phone out.” Lucero again explained her purpose as a protestor against the ban on sleep and the police explained that they were here because she was disturbing the peace. One person in the crowd walked up and tried to speak with Lucero under the assumption that she was having some kind of mental break. They asked, “Are you on your medications?” to which the protestor again responded with her reasons for being against the wall of the O'Neill store. The police thanked the person for their effort to help. After a short conversation with Lucero, they left without a citation issued or an arrest made. The crowd dispersed soon after the police.

“Oh shit,” Lucero said, “What time is it?” When this reporter answered 8:45pm, she responded, “Uh oh, ok, I gotta go use the public toilet before they close them at nine, otherwise I won't have a legal place to piss either!” Laughing, she joined the flow of the crowd and walked away down Pacific Avenue. The public restrooms in downtown Santa Cruz close at 10pm, which means people who live on the street downtown have nowhere to use a toilet.

Lucero's protest is not the only struggle over public space on Pacific Avenue. The past several months have also seen citations and arrests of artists displaying their work outside of designated 2 by 4 foot areas on the sidewalk called “blue boxes” because of the blue paint used to mark their corners. Additionally, Santa Cruz city council passed a new ordinance in May restricting artists from selling a variety of creative wares and services including jewelry, clothing, beadwork, massage sessions, or face painting.
§Lucero naps in front of O'Neill store
by zh 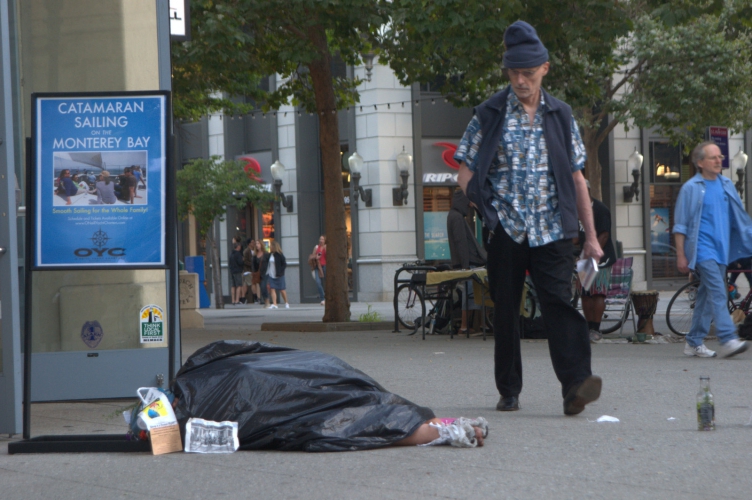 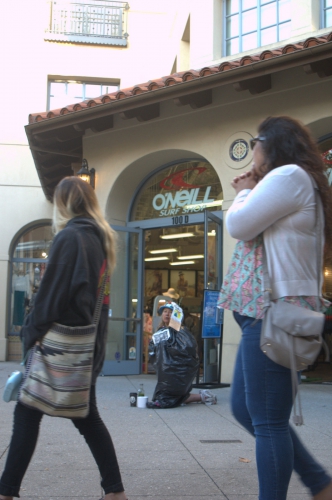 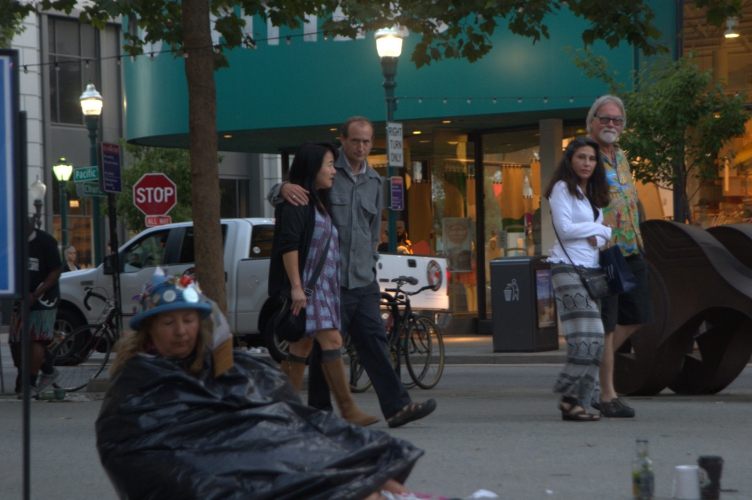 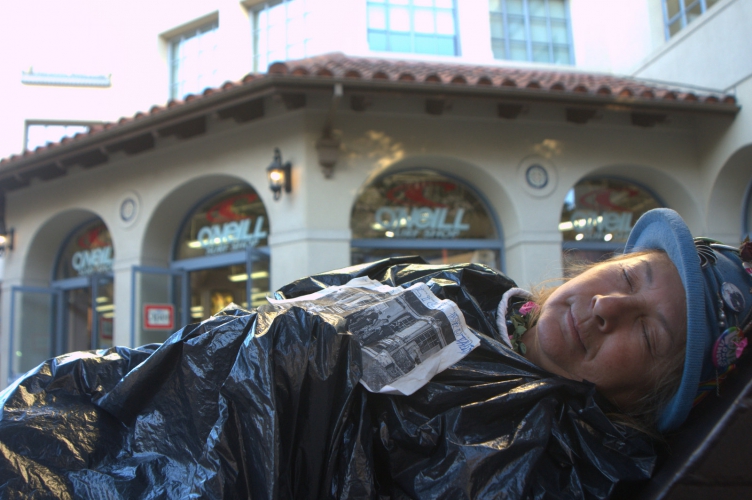 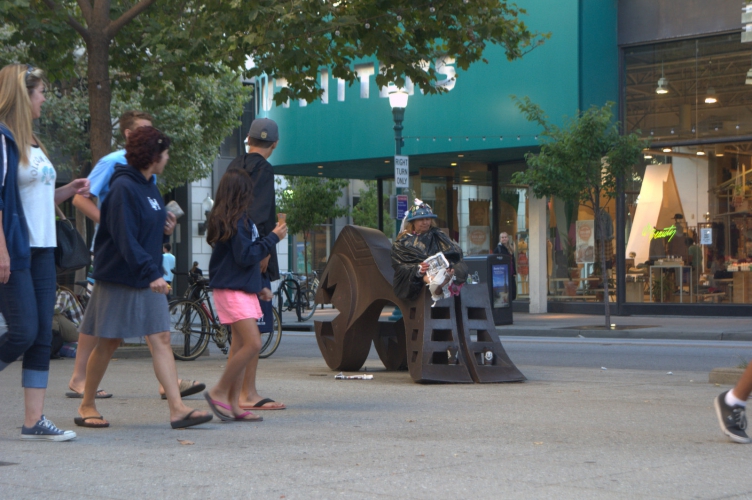 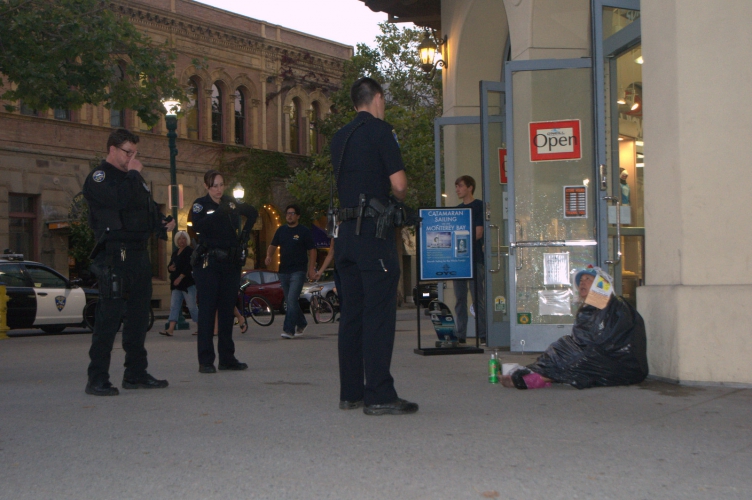 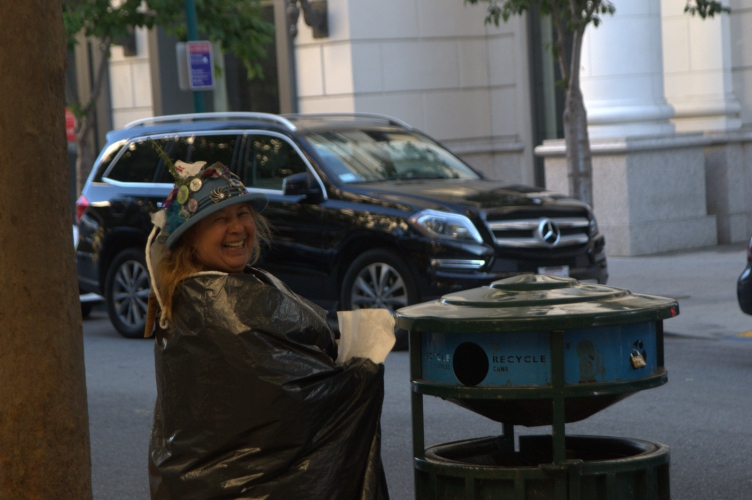 original image (1600x1063)
Add Your Comments
Latest Comments
Listed below are the latest comments about this post.
These comments are submitted anonymously by website visitors.
TITLE
AUTHOR
DATE
Good going Lucero!
Adi
Way to go, Lucero!
dogwood
Support Independent Media
We are 100% volunteer and depend on your participation to sustain our efforts!