Add an Event
Newswire
Calendar
Features
Home
Donate
From the Open-Publishing Calendar
From the Open-Publishing Newswire
Indybay Feature
Publish to Newswire
Add an Event
Related Categories: Central Valley | Police State & Prisons
Power for the People
by Mike Rhodes (mikerhodes [at] comcast.net)
Friday Jul 22nd, 2016 10:09 PM
This was an interview on the Street Heat radio show (July 22, 2016) on KFCF 88.1 FM with Justice Medina and friends. Justice was the lead organizer of an impressively large demonstration in Fresno demanding police accountability. 30:40 minute audio.
Listen now:
Copy the code below to embed this audio into a web page:
Download Audio (58.7MB) | Embed Audio
This is a conversation with Morgan Chiles, Emerald Depree and Justice Rene-Anthony Medina, the organizer of the very large Black Lives Matter demonstration that shut down Shaw, Blackstone and then Bullard avenue on July 9. Justice was issued a citation last week because he did not have a permit for the event. The American Civil Liberties Union (ACLU) noted that a special event permit can take several weeks to secure. According to activists, the urgency of the demonstration - responding to recent officer involved shootings, makes the burdensome application process an infringement on the first amendment right to free speech. 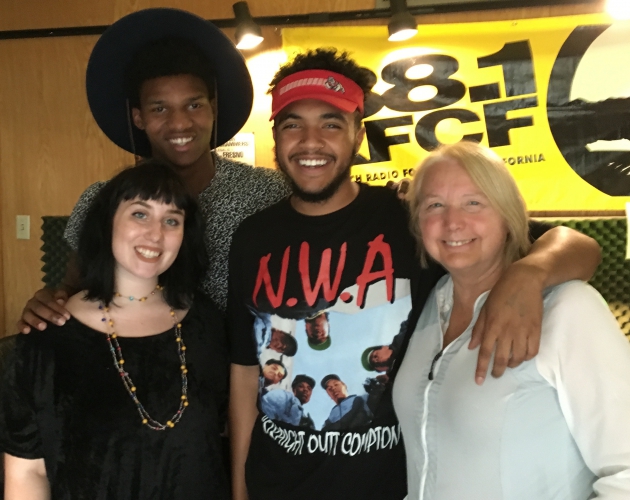 original image (3161x2506)
From left to right: Morgan Chiles, Emerald Depree, Justice Medina and Pam Whalen.
§Power for the People - the un-cut version
by Mike Rhodes (mikerhodes [at] comcast.net) Saturday Jul 23rd, 2016 7:27 AM
Listen now:
Copy the code below to embed this audio into a web page:
Download Audio (7.5MB) | Embed Audio
This is the original version of Justice Medina's song Power for the People. I had to edit the original version, because it was being broadcast on the radio and FCC rules prohibit things like Fuck Jerry Dyer, Fuck the system. . .

The FCC has the power to take away a radio station's license or levy a fine that would bankrupt us. But, the FCC does not have control of the Internet.
Add Your Comments
Support Independent Media
We are 100% volunteer and depend on your participation to sustain our efforts!