Add an Event
Newswire
Calendar
Features
Home
Donate
From the Open-Publishing Calendar
From the Open-Publishing Newswire
Indybay Feature
Publish to Newswire
Add an Event
Related Categories: Americas | International
Obama and Nieto peddle TPPA, ignore police massacres
by IndyRadio/David Roknich
Friday Jul 22nd, 2016 3:36 PM
Police massacres of striking teachers in Mexico were ignored in discussions held between leaders of the US and Mexico, who instead focused on the merits of the Trans Pacific Partnership Agreement. No questions about Nochixtlán or Ayotzinapa were asked by the press during the short time allowed for questions.
Copy the code below to embed this movie into a web page:
Download Video (160.3MB) | Embed Video
One remarkable statement, in the screen capture posted below, was a strange remark by President Peña Nieto that we can "turn North America into a terrorism free nation" when he was talking about the great promise of the Trans Pacific Partnership, The time on the video here is shifted because 46 minutes of blank video is removed from the original.
The final capture juxtaposes the 2 leaders against a background of militarized police, funded by US dollars to fight a drug war. They're seen here during the encirclement of San Cristóbal de las Casas, Chiapas where they arrived in force to pre-empt a protest by striking teachers on April 15. Coverage of that incident is here:
https://chiapas-support.org/2016/04/19/frayba-repression-torture-and-arbitrary-arrests-of-chiapas-teachers/

INDYRADIO The future of radio belongs to us. The newest playlists are linked at http://rd0.org
https://indyradio.info
§We can "turn North America into a terrorism free nation" said Peña Nieto.
by IndyRadio/David Roknich Friday Jul 22nd, 2016 3:36 PM 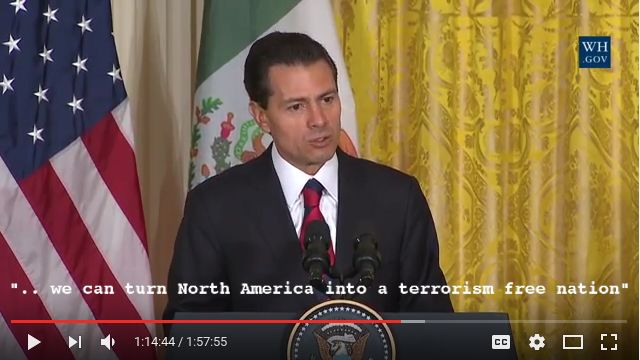 His voice, in Spanish was inaudible, but this is what the official translator relayed during the press conference this morning.
https://indyradio.info
§Leaders of US and Mexico speak against background of impunity.
by IndyRadio/David Roknich Friday Jul 22nd, 2016 3:36 PM 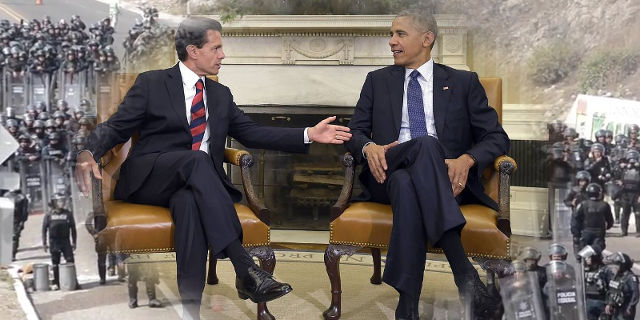 The background is from the video of the siege of San Cristóbal de las Casas by what seemed to be thousands of police, including snipers with rifles seen on the hillsides surround the small town. A full report is linked.
https://indyradio.info
§Linked report of police attack
by IndyRadio/David Roknich Friday Jul 22nd, 2016 3:44 PM
just to be clear, the link was in the article above also.
"Testimonies refer to the fact that in San Cristóbal de Las Casas, police aggressions included breaking into private homes and businesses, the use of tear gas damaging the family members sick people that were in the Hospital of Culturas, people beaten although they had nothing to do with the demonstrations, vigilance on the part of soldiers dressed as civilians and the infiltration of shock groups to justify repression and to generate confrontation. At the same time two Federal Police helicopters, without registration, flew over and shot tear gas, and one helicopter from civil protection."
original in Spanish is here:
http://www.frayba.org.mx/archivo/boletines/160416_boletin_10_represion_estado.pdf
https://chiapas-support.org/2016/04/19/fra...
Add Your Comments
Support Independent Media
We are 100% volunteer and depend on your participation to sustain our efforts!