Add an Event
Newswire
Calendar
Features
Home
Donate
From the Open-Publishing Calendar
From the Open-Publishing Newswire
Indybay Feature
Publish to Newswire
Add an Event
Related Categories: Central Valley | North Coast | Environment & Forest Defense | Government & Elections
Youth Protest Klamath River Water Pollution
by Dan Bacher
Friday Jul 22nd, 2016 10:29 AM
“As a Yurok Tribal member, I am deeply affected by what happens on the Klamath River,” said Stoney McCoy, a 16 year-old Yurok Tribal Youth Council member. “ What I saw today coming out of the Klamath Strait Drain made me sick to my stomach, I will fight for as long as it takes to clean up the Klamath 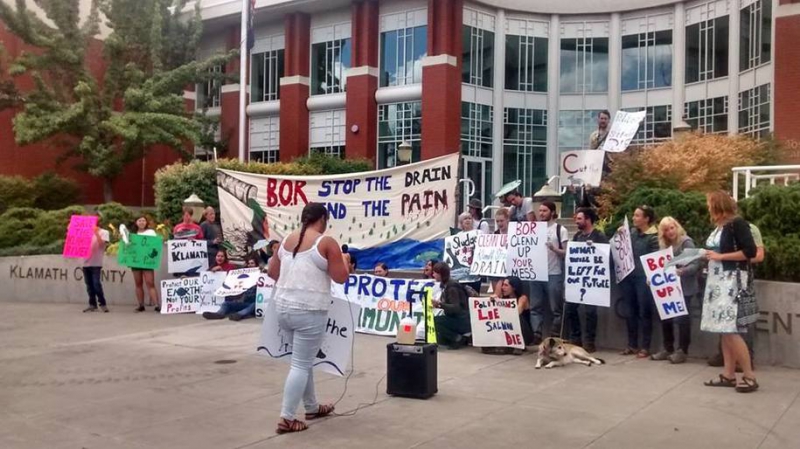 original image (915x514)
On July 18, a group of over two dozen youth, including teens from the Yurok and Hoopa Valley Tribes, organized three protests demanding a thorough clean up of the polluted Klamath Strait Drain in Klamath County, Oregon.

The drain dumps polluted water into the Klamath River, harming down river communities and struggling Klamath king and coho salmon and steelhead, populations, according to a statement from the Youth Coalition for a Clean Klamath.

As they marched in front of the Klamath County government building, the group chanted, "When the river is under attack, what do we do? Stand up and fight back!"

They held signs proclaiming, "Save the Klamath," "B.O.R Clean Up Your Mess," "Politicians Lie Salmon Die," "Save Our Salmon," and "Protect Our Earth," Not Your Profits." Two protesters also carried a banner that read, "BOR Stop the Drain. End The Pain."

Finally, the youth delivered the polluted water samples to the Klamath Office of the Bureau of Reclamation and "had a productive dialogue with acting Klamath BOR director, Jason Cameron,” the group stated.

“The Climate Justice Camp youth took over the plaza where the notorious bucket brigade bucket once stood in downtown Klamath Falls,” commented Stormi Salamander, independent journalist and filmmaker. “The youth demanded that the Klamath Strait Drain stop dumping toxic ag run off into the Klamath River.”

The Youth Coalition for a Clean Klamath is "a diverse group of concerned youth activists from Northern Oregon to Northern California, including Yurok and Hoopa Tribal members that rely on the Klamath River for food and cultural practices."

“As a Yurok Tribal member, I am deeply affected by what happens on the Klamath River,” said Stoney McCoy, a 16 year-old Yurok Tribal Youth Council member. “What I saw today coming out of the Klamath Strait Drain made me sick to my stomach, I will fight for as long as it takes to clean up the Klamath.”

Klamath River Chinook salmon, coho salmon and steelhead need to return to the Upper Klamath Basin to their original spawning grounds for their species’ survival. "Their road to recovery needs more than just dam removal; conditions must improve dramatically for the fish to survive," the coalition stated.

“As a Native American woman, my livelihood and my cultural depends on the river, it depends on the fish,” said Lacey Jackson, a 17-year old from Northern California. “My livelihood is constantly under attack but that’s not the narrative being told.”

“Their voice is strong. They are telling you they are not going to take it anymore... The dams are coming down but we’re not going to be satisfied until our water is clean,” Hillman said. (http://www.heraldandnews.com/news/local_news/pollution-protest/article_fba043f1-caf1-5064-bbf3-959654f36842.html)

The coalition is demanding that the Federal Bureau of Reclamation “clean up the dirty water coming from the Klamath Strait Drain and that farmers practice more water-efficient methods to reduce waste and harm."

The group formed at the Next Generation Climate Justice Action Camp (NGCJAC), a seven-day summer camp to empower youth around Oregon and Northern California by providing age-appropriate training and mentoring. Workshops at the camp included strategic campaign planning, media outreach, legal trainings, and anti-racist trainings. The camp is sponsored by the Civil Liberties Defense Center.

The Pacific Coast Federation of Fishermen’s Associations (PCFFA), Institute for Fisheries Resources, and Klamath Riverkeeper, represented by Earthjustice, put officials of the two federal agencies on 60-day notice that they could be sued under the federal Endangered Species Act if they fail to reopen and improve water management in the Klamath River. Coho salmon that make their home in the Klamath River are listed as a threatened species under the act.

The groups said mismanagement of Klamath River flows led to a disease outbreak in more than 90 percent of juvenile salmon in 2015 and nearly that many in 2014.

“We are united in seeking management of flows in the Klamath River that will improve the plight of salmon, not make it worse.” said Patti Goldman, a managing attorney for Earthjustice. “The Bureau and NMFS must take immediate action and initiate comprehensive discussions on possible solutions.”

On April 6, representatives of the US Departments of the Interior and Commerce, the states of Oregon and California, the Yurok Tribe, the Karuk Tribe and PacifiCorp signed an agreement clearing the path for dam removal on the river.

The Amendment to the Klamath Hydroelectric Settlement Agreement (KHSA)—if approved by the Federal Energy Regulatory Commission (FERC)—will initiate the removal of four dams on the Klamath River. It will be “one of the largest river restoration projects in the history of the US,” according to Interior Secretary Sally Jewel. (http://www.oaklandmagazine.com/Feds-States-and-Tribes-Sign-Klamath-Dam-Removal-Agreement/)

However, as the Youth Coalition for a Clean Klamath points out, Klamath River salmon, steelhead and other fish species need more than just dam removal to recover from decades of federal and state water mismanagement; water conditions must improve dramatically for the fish if we want to see full restoration of the river's ecosystem.

As the tainted water from the Klamath Strait Drain continues to pollute the Klamath River, Governor Jerry Brown is promoting the Delta Tunnels, the most environmentally destructive public works project in California history. The construction of the tunnels under the California WaterFix plan would imperil salmon and steelhead populations on the Trinity and Klamath rivers, as well as hasten the extinction of Sacramento River winter-run Chinook salmon, Central Valley steelhead, Delta and longfin smelt and green sturgeon.

That’s because massive quantities of water are diverted every year from the Trinity River, the Klamath’s major tributary, through a pipeline through the Trinity Mountains to the Sacramento River watershed and then to the Delta. The water is exported to irrigate toxic, drainage impaired land on the west side of the San Joaquin Valley to grow almonds, pistachios and other export crops to enrich subsidized corporate agribusiness interests (http://www.dailykos.com/story/2016/07/15/1548621/-Brown-Hires-Bruce-Babbitt-As-New-Point-Man-For-Delta-Tunnels)
Add Your Comments
LATEST COMMENTS ABOUT THIS ARTICLE
Listed below are the latest comments about this post.
These comments are submitted anonymously by website visitors.