Add an Event
Newswire
Calendar
Features
Home
Donate
From the Open-Publishing Calendar
From the Open-Publishing Newswire
Indybay Feature
Publish to Newswire
Add an Event
Related Categories: Americas | International | Education & Student Activism | Global Justice & Anti-Capitalism | Government & Elections | Labor & Workers
Protests force Mexico to talks with teachers
by IndyRadio/CNTE
Wednesday Jul 13th, 2016 6:51 PM
2 months of protest against the neoliberal assault on education in Mexico have finally resulted in talks between The Coordinadora Nacional de Trabajadores de la Educación (CNTE) and Interior Minister Miguel Angel Osorio Chong.Highways remain blockaded in 5 states and the teachers send us a video of protests from Monday, 11jul16
Copy the code below to embed this movie into a web page:
Download Video (113.6MB) | Embed Video
Mexico continues to protest the imposition of reforms intended to privatize education and continue the destruction of unions that began under the administration of Felipe Calderón. The teachers union, Coordinadora Nacional de Trabajadores de la Educación (CNTE)is the last of the unions in Mexico that exercises real power on behalf of its members. Popular support for the union continues despite many casualties inflicted by the Mexican police and military.

A series of talks has finally been scheduled as the result of massive disruptions since May. Telesur reports that "the first four negotiation sessions have not touched the subject of the controversial reforms, while Peña Nieto and Education Minister Aurelio Nuño have insisted that the policies are not up for debate."

The teachers hold fast to 3 demands, and will maintain the barricades until they are attained:
(1) the proposed neoliberal education reforms must be overturned
(2) a new comprehensive education policy created, and
(3) reparations must be paid for the deaths, injuries and destructions caused by military attacks against the people

A march to the Senate in Mexico City began at 10:00AM CST today, what we have received here from the CNTE is a video of a large march in Chiapas from Monday.

INDYRADIO The future of radio belongs to us. The newest playlists are linked at http://rd0.org
https://indyradio.info
§Education is a Right, not a business for entrepreneurs
by IndyRadio/CNTE Wednesday Jul 13th, 2016 6:51 PM 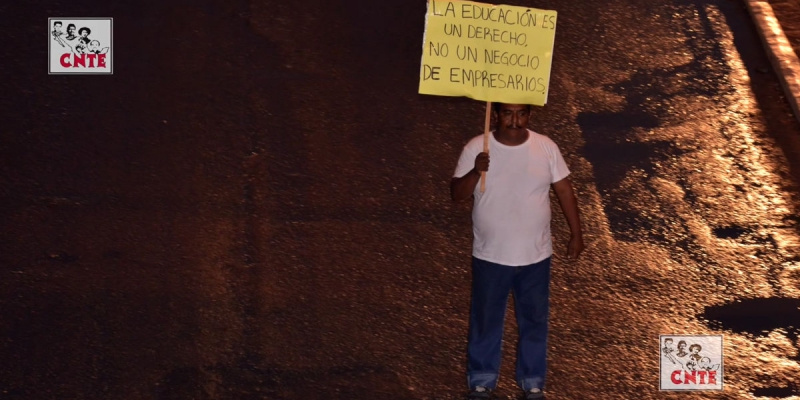 original image (1200x600)
The video speeds up at times to show the length and scope of the day's event, but they slowed it down to cherish a few solo moments like the one capture above.
https://indyradio.info
Add Your Comments
Support Independent Media
We are 100% volunteer and depend on your participation to sustain our efforts!