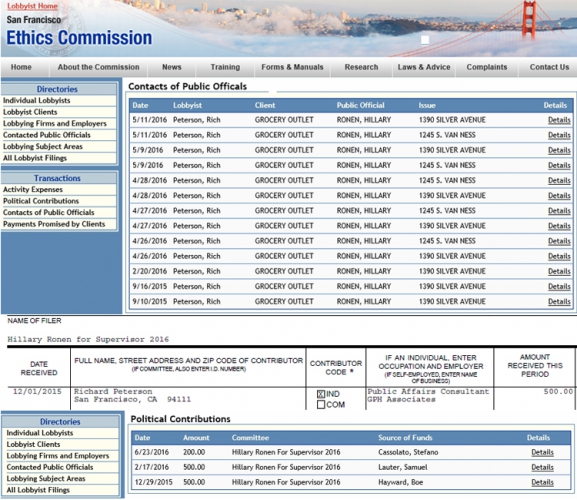 original image (750x649)
THINGS ARE HEATING UP IN THIS YEAR'S SAN FRANCISCO BOARD OF SUPERVISOR RACES. A local member of the United Food and Commercial Workers Local 648 has filed an ethics complaint against District Nine candidate Hillary Ronen and a lobbyist for the anti-union Grocery Outlet company for an unreported campaign donation and eleven meetings between the lobbyist and Ronen regarding a proposal to bring two Grocery Outlet stores into the district. Ms. Ronen works as a legislative assistant to the current District Supervisor David Campos, and most of the conversations with the Grocery Outlet lobbyist happened on the days surrounding the Planning Commission's consideration of permits for the two new stores.

The whistleblower uncovered a December 1, 2015 $500 donation from Grocery Outlet lobbyist Richard Peterson to Ronen's Supervisor campaign that went unreported to the San Francisco Ethics Commission as required. The donation is not listed on the Ethics website alongside $1,200 in additional lobbyist donations that Ronen has received to date. Ronen lists a San Francisco address for Peterson in her campaign filing, meaning the donation allows her to receive up to $1,000 in additional matching funds from the City.

Peterson reported 11 communications with Ronen to the Ethics Commission, two before and nine after his donation, including six on the day of the April 28 Planning Commission hearing and two each on each of the two days prior. The Board of Supervisors retains the authority to hear appeals like those made by the Planning Commission, and state and local law prohibits city officials from participating in making, or in any way seeking to influence, any governmental decision in which they have a financial interest. The Ethics Commission has the authority to ask Ronen and Peterson to share the contents of these 11 conversations, and whether any other unreported conversations or contributions occurred.

Grocery Outlet has opposed collective bargaining at nearly all of its locations, drawing opposition from community members and UFCW affiliates across the state for the past several years. Planning Commission records indicate that UFCW Local 648 sent Planning Commissioners an April 26, 2016 letter requesting a 30-day continuance in order to meet with Grocery Outlet representatives, which apparently triggered the first of the communications between Ronen and Peterson in the month of April.

The complaint alleges that Grocery Outlet undermines San Francisco wages, benefits and working conditions, which led the whistleblower to research those involved in helping the company secure permits. The Ethics Commission did not comment on the status of the complaint upon request.

SF Labor News
Add Your Comments
LATEST COMMENTS ABOUT THIS ARTICLE
Listed below are the latest comments about this post.
These comments are submitted anonymously by website visitors.