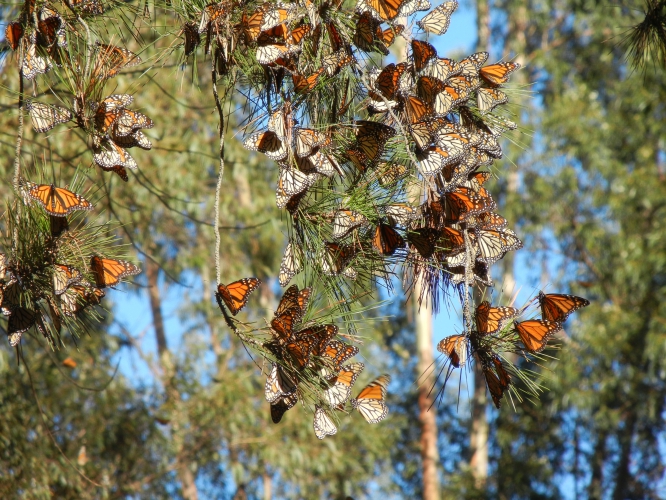 original image (4000x3000)
State of the Monarch Butterfly Overwintering Sites in California provides an analysis of western monarch population trends. A comparison of the average number of butterflies overwintering in California during the periods 1997–2001 and 2010–2014 shows a decline of 74 percent, a figure that is comparable to declines documented at monarch overwintering sites in Mexico.

The report presents a list of the 50 California overwintering sites most in need of protection and management, based on the severity of butterfly declines at each site and their importance to the remaining population. Listed sites span the monarch’s overwintering range along the Pacific coast and the East Bay of San Francisco, including Pismo Beach and Morro Bay Golf Course in San Luis Obispo County, Ellwood Main in Santa Barbara County, Pacific Grove Sanctuary in Monterey County, Lighthouse Field State Beach and Moran Lake in Santa Cruz County, and San Leandro Golf Course in Alameda County. Most of the 50 priority sites are publicly owned, however a substantial number of the largest sites are in private ownership.

“Active management of these sites is the key to ensuring that they will support monarchs in the future,” said Sarina Jepsen, director of the Xerces Society’s Endangered Species program and report coauthor. “This report can be used to help conservationists and land managers prioritize how limited resources are allocated for the greatest conservation benefit.”

In addition to documenting decline and prioritizing overwintering sites, the report also identifies important knowledge gaps and conservation issues regarding monarchs in the West and provides recommendations for management of overwintering groves. Intended for use by land managers, policy makers, restoration practitioners and researchers, this report raises awareness about the importance of California overwintering sites in conserving monarch butterflies and their migratory phenomenon in the West.

Monarch butterflies are distributed throughout North America. While eastern monarchs migrate to central Mexico for the winter, western monarchs spend the winter on the California coast as well as in central Mexico. Although the number of monarchs overwintering in Mexico experienced an uptick last year, according to a recent study by the U.S. Geological Survey, monarchs overwintering in Mexico have undergone an 84 percent decline from their population maximum in 1996. This decline is comparable to the decline in California over the same time period.

The loss of breeding habitat, especially milkweed, due to the increased use of genetically modified herbicide-resistant crops, is an important factor influencing the decline of monarchs in the eastern United States. Evidence for breeding habitat loss is less clear in the West, and the continent-wide decline in monarch numbers may be compounded by other stressors such as disease, increased frequency of drought driven by climate change and the widespread use of neonicotinoid insecticides, as well as destruction of their overwintering habitat.

Monarchs and their overwintering groves fall under a patchwork of legal protection in California, but are not comprehensively protected. Management to maintain the microclimate at these groves is often lacking. However, the monarch has recently been added as a Species of Greatest Conservation Need by multiple western states, including California, which will expand the ability for state agencies to engage in monarch conservation. California recently passed AB 559 which authorizes the California Department of Fish and Wildlife to take actions to conserve monarch butterflies and their habitats. In addition, the monarch butterfly is under review by the U.S. Fish and Wildlife Service for protection under the federal Endangered Species Act, with a final listing ruling expected in June 2019.

The data for this report comes from over one hundred committed volunteers who participate in the Xerces Society’s annual Western Monarch Thanksgiving Count, by monitoring the butterflies’ population size and habitat condition each fall around the Thanksgiving holiday. This report was completed with funding from the US Fish and Wildlife Service and Xerces Society members.

Read and download State of the Monarch Butterfly Overwintering Sites in California at http://www.xerces.org/state-of-the-monarch-butterfly-overwintering-sites-in-california/

For information about the Western Monarch Thanksgiving Count and how to get involved, visit http://www.westernmonarchcount.org

Read more about Xerces’ Monarch Conservation Campaign, including efforts to conserve overwintering sites in California and restore breeding habitat in key regions of the United States at http://www.xerces.org/monarchs/

Photo Credit: Candace Fallon/The Xerces Society for Invertebrate Conservation. Please include a photo credit with any use.


The Xerces Society for Invertebrate Conservation Protecting the Life that Sustains Us The Xerces Society has the world’s largest pollinator conservation team, with 9 FTE currently working on monarch conservation. Efforts include habitat restoration on farms throughout the country, national development of milkweed production best practices, restoration of overwintering sites in California, conservation and management of critical habitat across central and western U.S. and engagement of citizens in monarch research and protection. We partner or contract with university researchers, NGOs, and federal agencies (such as the Natural Resources Conservation Service, U.S. Geological Survey, U.S. Fish and Wildlife Service, U.S. Forest Service, Bureau of Land Management and Federal Highway Administration) on monarch conservation and recovery projects.

To learn more about our work, please visit http://www.xerces.org 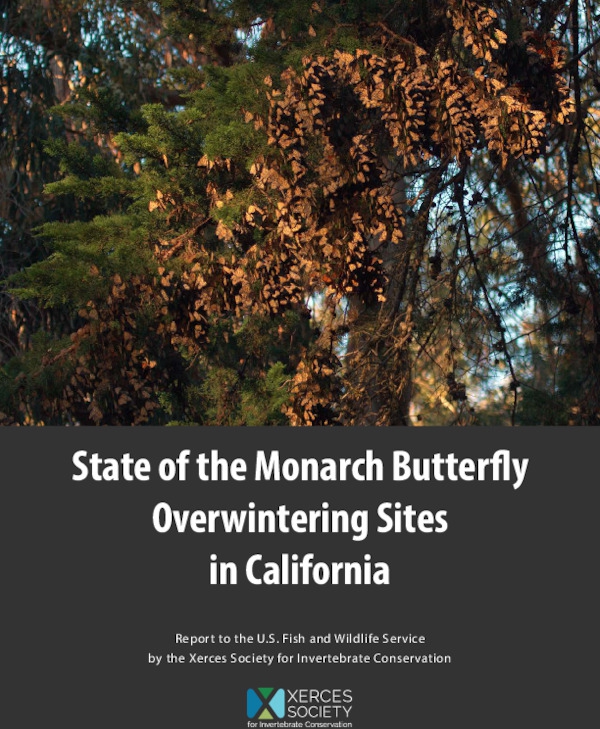 Download PDF (4.6MB)
Add Your Comments
LATEST COMMENTS ABOUT THIS ARTICLE
Listed below are the latest comments about this post.
These comments are submitted anonymously by website visitors.