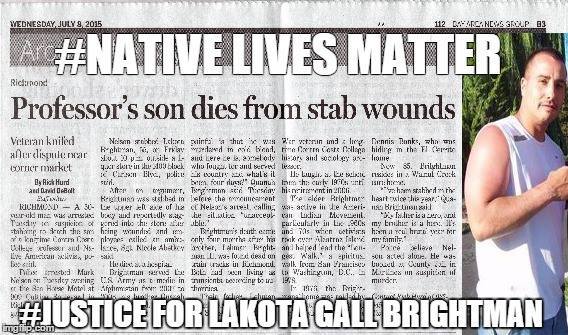 On May 25th, 2016. The Jury Found Mark Anthony Nelson #Guilty of PC 187- Murder First Degree & Of Knife Enhancement for the Murder of Lakota Gall Brightman on July 3rd, 2015.

We are Asking For Solidarity in Helping Our Win Justice for Our Beloved Family Member, Lakota Gall Brightman's Murderer (Mark Anthony Nelson: Case Number 5-151356-3) Be Sentenced to Live in Prison.

Please Take a Moment of Your Time to Write a Letter to the Honorable Judge Laurel S. Brady in Department 31 ASAP and to Show up to the Sentencing on Friday July 29th, 2016 at 8:30AM.

I am the (Family Member/Friend of Victim).

The loss of Lakota Gall Brightman is beyond words. Lakota Gall Brightman was born on December 25th 1969 in Rapid City, South Dakota to parents Lehman and Trudy Brightman. He was the second of three children. Lakota attended Delmar Elementary School, Portola Junior High School, and graduated from El Cerrito High School in 1988. His earlier years were spent advocating for Native American Rights along with his family and the Organization founded by his father Lehman and carried on by his brother Quanah, United Native Americans. United Native Americans was and are still very active in Native american rights and the promotion of progress and general welfare of Native Americans. Specialist Lakota Gall Brightman served 6 years in the California Army National Guard, 235th Engineer Company (Sapper) as an Army Field Medic from August 11, 2007 to his date of separation on August 10th, 2013. Lakota was ordered into active service in 2007 in support of Operation Enduring Freedom Afghanistan.

He is remembered as a gentle and kind hearted human being who wanted to help others and was a beloved son, brother, nephew, cousin, uncle, father, friend and hero. He is preceded in death by his mother Trudy Brightman and his older brother Lehman Brightman III. Lakota is survived by his Daughters, Phoebe (23) and Star (13) Brightman his brother Quanah Parker Brightman, father Chief Lehman L. Brightman, aunts Nancy and Lorelie Oldlodge and uncles, Anthony David Clairmont and Donald Oldlodge. Taken too soon, Lakota is warmly remembered and greatly missed by all who knew and loved him.

There will be no more birthday parties, backyard gatherings, holiday celebrations or other family activities to share. The laughter, hugs, guidance/advice, sense of security and those opportunities to say, “I love you” are forever gone. Our family is forever “broken”.

To say the least, the financial affect on the family has also been devastating.

Compassion is a word commonly used for and by defendants. However, I ask, how much compassion the defendant considered when the decision was made to murder Lakota Gall Brightman?

It is the request of the family that the maximum penalty for the crime for which the defendant was convicted be imposed. On behalf of the family of Lakota Gall Brightman, I wish to express my sincerest gratitude for allowing this opportunity of expression.

Quanah Parker Brightman
Executive Director of
United Native Americans
qbrightman75 [at] hotmail.com
(510) 672-7187
http://unitednativeamericans.weebly.com/
END_OF_DOCUMENT_TOKEN_TO_BE_REPLACED
Added to the calendar on Sat, Jul 2, 2016 4:13PM
Add Your Comments
Latest Comments
Listed below are the latest comments about this post.
These comments are submitted anonymously by website visitors.
TITLE
AUTHOR
DATE
Not with My Tax Dollars
Abolitionist
Support Independent Media
We are 100% volunteer and depend on your participation to sustain our efforts!