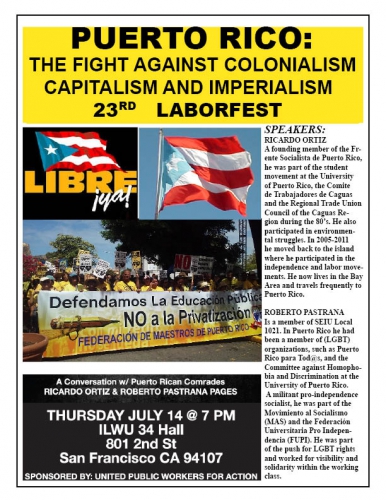 Puerto Rico has been a colony of the United States since 1898. The first free trade zone was set up in Puerto Rico during the 1950’s and it was called “Bootstrap”. It set up tax free zones for US multi-nationals and the US has also pushed privatization of the Puerto Rican economy in energy, healthcare, and other services.

The result has been deprivation and forced exile of the majority of the people in Puerto Rico. Today the US government has taken direct control of Puerto Rico like the bankrupt cities in Detroit and Flint, and this is being used to attack the working class. This forum will look at the present situation and also what US workers can do about this.

Roberto Pastrana is a member of SEIU Local 1021. In 2014, he moved from Puerto Rico, where he had been a member of lesbian, gay, bisexual and transgender (LGBT) organizations on the islands, such as Puerto Rico para Tod@s, and the Committee against Homophobia and Discrimination at the University of Puerto Rico. A militant pro-independence socialist, Roberto was part of the Movimiento al Socialismo (MAS) and the Federación Universitaria Pro Independencia (FUPI). He was part of the push for LGBT rights and worked for visibility and solidarity within the working class.

Ricardo Ortiz, labor activist and supporter of the workers movement in Puerto Rico. He was a leading member of the Frente Socialist de Puerto Rico, and was part of the student movement at the University of Puerto Rico., the Comite de Trabajadores de Caguas and the Regional Trade Union Council of the Caguas Region during the 1980's.

Sponsored by United Public Workers for Action
http://www.upwa.info
END_OF_DOCUMENT_TOKEN_TO_BE_REPLACED
Added to the calendar on Wed, Jun 29, 2016 3:45PM
Add Your Comments
Support Independent Media
We are 100% volunteer and depend on your participation to sustain our efforts!