by Dan Bacher
In his decision, Judge Michael Kenny said: “To be clear, the Delta Plan is invalid and must be set aside until proper revisions are completed." 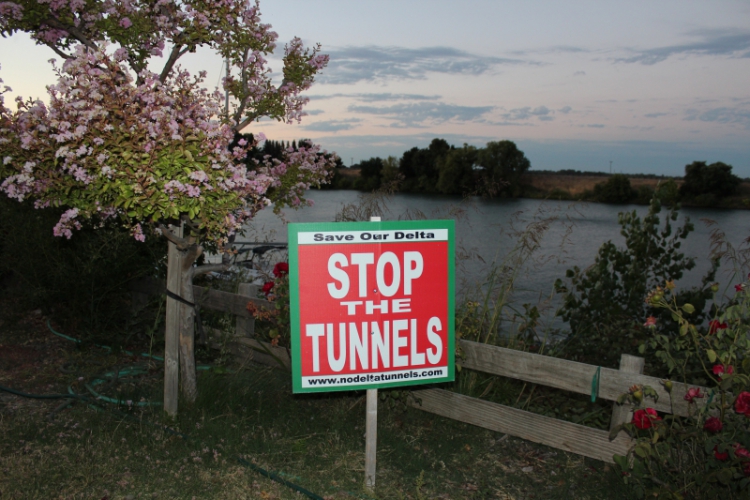 Judge Michael Kenny of the Sacramento Superior Court today ruled that the Delta Plan is "invalid" after a successful legal challenge by multiple Delta parties who argued that the controversial plan is not protective of the water quality or the fish species that depend on fresh water flows for their survival.

The Court, in its tentative ruling vacating the plan, said the Delta Stewardship Council must redo the Delta Plan to include a number of quantitative measures of performance, including reduced reliance on the Delta for future water needs by exporters.

Since the Delta Plan relied heavily on Governor Jerry Brown's Delta Tunnels Plan, now called the California WaterFix, to achieve its goals, Delta and public trust advocates see this as significant victory that will delay the twin tunnels for years.

The Delta Plan was required by the 2009 Delta Reform Act, a law designed to implement the two coequal goals of providing a more reliable
water supply for California and protecting, restoring, and enhancing the Delta ecosystem. "The coequal goals shall be achieved in a manner
that protects and enhances the unique cultural, recreational, natural resource, and agricultural values of the Delta as an evolving place," according to the Act.

In his decision, Judge Kenny said: “To be clear, the Delta Plan is invalid and must be set aside until proper revisions are completed. As Respondent itself argued previously, in light of an invalid Delta Plan, there is no proposed project, and consequently nothing before the Court to review under CEQA. The Court does not believe that piece-meal CEQA review is feasible under circumstances in which significant Plan revisions are required.”

Representatives of groups who participated in the lawsuits against the weak protections in the Delta Plan hailed the decision. They plan to issue a full press release on Friday, June 24.

“The court invalidated the Delta Plan because it blatantly failed to comply with the law and, consequently, was not protective of the Delta," said Bill Jennings, executive director of the California Sportfishing Protection Alliance (CSPA). "The Plan failed to mandate specific requirements that would reduce reliance on the Delta, provide for more natural flows, reduce harm from invasive species or increase water supply reliability though increased regional self-sufficiency."

"The order will require major changes in the Plan that will reverberate though-out the document necessitating new environmental review. This will delay WaterFix’s efforts to construct the Delta tunnels by years and force the state and federal contractors to reassess whether they wish to expend tens of billions of dollars for a project that will supply less water from the Delta," explained Jennings.

In a statement, Jessica Pearson, Executive Officer of the Delta Stewardship Council, said they were "disappointed" with the ruling.

"While the Sacramento Superior Court’s May 19th ruling upheld significant aspects of the Council’s Delta Plan, the tentative ruling from today unfortunately moves to set aside the Delta Plan until specified revisions are completed," Pearson stated. "At the same time, the Court validated the Council’s role in creating an enforceable Delta Plan, and the Council’s use of best available science to set direction for the Delta."

"While the Council is still considering the full implications of the ruling, we are disappointed that the Court chose to invalidate the entire Delta Plan because of what it identified as inadequacies in two discrete areas:

• Inadequate “promotion” of options to improve the way water projects move water across the Delta."

Pearson said an appeal of Judge Kenny's decision is likely. "The Delta remains in crisis and now isn’t the time to set aside the State’s only comprehensive management plan for the Delta. Because of this, the Council likely will appeal," she said.

For the complete statement from the Council, go to: https://mavensnotebook.com/2016/06/23/this-just-in-delta-stewardship-council-issues-statement-on-courts-tentative-delta-plan-ruling/'