Add an Event
Newswire
Calendar
Features
Home
Donate
From the Open-Publishing Calendar
From the Open-Publishing Newswire
Indybay Feature
Publish to Newswire
Add an Event
Related Categories: Americas | International | San Francisco | U.S. | Anti-War | Education & Student Activism | Global Justice & Anti-Capitalism | Labor & Workers | Police State & Prisons
Mexico Teachers' Murders Protested In SF "Massacre Made In USA"
by Labor Video Project
Wednesday Jun 22nd, 2016 9:01 PM
Teachers and other community activists and unionists protested at the San Francisco Mexican consulate the massacre of teachers and community activists in Oaxaca. They called for an end to US weapons being sent to Mexico and also put responsibility for the massacre on the US multi-nationals and capitalist politicians from the Democrats and Republicans to privatize education through NAFTA and the Mérida Initiative which has militarized Mexico. 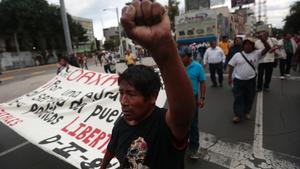 Mexico Oaxaca Teachers Murders Protested In SF "Massacre Made In USA"
https://youtu.be/4RrK-S3Q9qs
The massacre of striking CNTE" Mexican Independent teachers Union, community people and supporters of public education in Oaxaca Mexico was protested in San Francisco on June 22, 2016. Teachers including from the UESF, AFT 2121 and Tim Paulson, the head of the San Francisco Labor Council and labor activists condemned the massacre by police and military who have been supplied by the United States. Protesters also connected the privatization and corporatization of education in Mexico with the charters and the attack on public education in the United States. The use of the military and police on the striking teachers is bringing a growing anger and those unions in San Francisco that participated demanded that the US government cut off military weapons to Mexico. US politicians including Democrats like Hillary Clinton and the Republicans have supported the Mérida Initiative which has militarized Mexico and turning it into a colony of the United States and it's billionaires. Al Rojas, a founder of the United Farmworkers Union of America also attacked the so called "comprehensive immigration reform" that according to Rojas will further militarize the border and also expand the use of "guest workers" that will be used as cheap labor by Driscoll and other US corporations. He further charged that the UFWA is setting up broker offices in Mexico in cahoots with the Mexican government to bring in these indentured workers to the US and make them union members. Other participants pointed out that Hillary Clinton and her husband Bill Clinton were responsible for NAFTA and continue to support this reactionary trade bill that has enslaved the Mexican people including unionists and peasants and is forcing the privatization of education backed up by the US supplied military and police.
Additional media:
https://youtu.be/xu4qLP_O3Sk
https://www.youtube.com/watch?v=Nr0snX6OqQg
http://youtu.be/QVw_g87oeCY
https://www.youtube.com/watch?v=ZuVDgT9GDlY
https://www.youtube.com/watch?v=wnuu1Javuv8
https://www.youtube.com/watch?v=GYYv9sLaFjk
http://www.counterpunch.org/2016/06/22/the-cntes-battle-for-education/
http://www.teachersolidarity.com/blog/fight-against-education-reform-in-mexico-goes-on
http://www.counterpunch.org/2016/03/07/as-not-seen-in-billions-the-untold-story-of-top-new-york-times-shareholder-mexican-tycoon-carlos-slim/
Production of Labor Video Project
http://www.laborvideo.org

The Labor Council for Latin American Advancement (LCLAA), AFL -CIO, Sacramento California USA, is an organization of trade unionists that fight for justice, democracy and peace. The teachers from the Coordinadora Nacional de Trabajadores de la Educación (CNTE), who work and struggle for a just, democratic, and peaceful Mexico, remain repressed, persecuted, and imprisoned by the violent Mexican state forces that protect the economic interests of the United States and Mexico. The Mexican government’s physical and ideological violent response to the democratic demands of the CNTE teachers proves that the government's political stubbornness is in reality the continuity of the neoliberal project to further privatize and dismantle the educational system at the expense of the worker and the impoverished people of Mexico. With this resolution, the Sacramento chapter of Labor Council for Latin American Advancement (LCLAA), demands a halt to the persecution of leaders of the CNTE, freedom for imprisoned teachers, constitutional guarantees for all Mexican citizens, and the development of democratic proposals to resolve the conflict.

We are aware that the protests continue in the capital and other states in Mexico. We will endeavor to inform the trade union movement in the United States of the anti-democratic actions by the Mexican government and allocate resources to show solidarity with the democratic teachers of Mexico.

DISMISSED: In Mexico more than 4,000 teachers have been dismissed for participating in the strike, adding to the 3,360 already fired for missing punitive evaluations, which has culminated to an estimated 8,000 teachers being fired to this day.

JAILED: The seven leaders of Section 22, OAXACA jailed. The two latest arrest of professor Ruben Nunez Gines, the Secretary General of the Section and professor Francisco Villalobos, Secretary of Organization section who were arrested June 11th and June 12th. The professor’s relative’s homes have been plagued with great violence after leaving a General Assembly of the CNTE in city of Mexico. After their arrests both were sent to a high security prison to Hermosillo, Sonora, about two thousand kilometers from the city Of Oaxaca. The teachers have been falsely charged and imprisoned for funds of illicit origins. The Mexican government's goal is to discredit the Secretary General of the Section and Secretary of Organization by profiling them as criminals; when in reality, they are political prisoners of conscience.

THE EVICTION OF THE SIT-IN TEACHERS IN THE CITY OF MEXICO: On two occasions, during the early morning hours, thousands of police officers evicted teachers who were peacefully sitting in in protest in the Secretary of Public Education’s office in the city of Mexico. On the last occasion, the government deported the demonstrators to their states in buses specifically hired for it. Teachers returned, settling in another public space, but with worse conditions.

PREVENTING TEACHERS FROM REACHING THE CITY OF MEXICO OR LEAVE THEIR STATES. Thousands of federal police officers equipped with military weaponry have blocked entrance roads to Mexico City. This blockade has prevented the arrival of buses with teachers from Michoacán, Guerrero, Tabasco, Oaxaca and Chiapas on four occasions when the teachers were summoned for demonstrations in the capital. Today, federal police officers have tried to prevent buses carrying teachers from Oaxaca from leaving their state of Oaxaca.

PREVENTING TRANSIT IN MEXICO CITY: Police operations have encapsulated the contingent of teachers marching in the city to address points of protest.

KILLED: Adding to already hostile situation, in the last three years, following the imposition of educational reform, teachers have been murdered or killed by impacts which were recorded during police repressions, not forgetting, of course the 43 student from the rural teaching college who are missing. 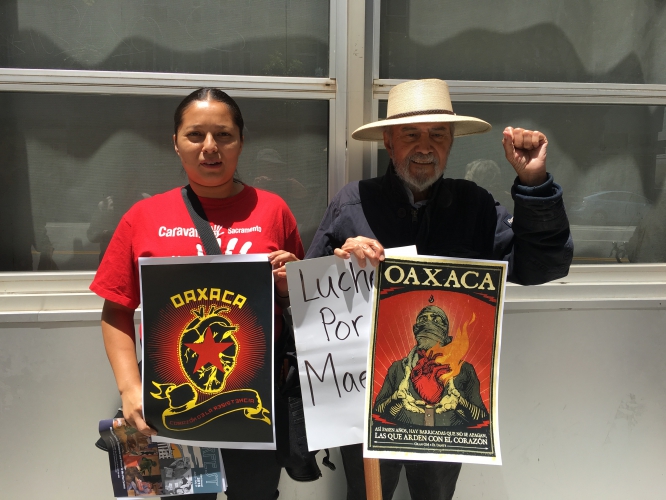 original image (4032x3024)
Al Rojas said that the US government and capitalist politicians like Hillary Clinton are directly responsible for the murders of teachers and community people in Oaxaca.
https://youtu.be/4RrK-S3Q9qs
§AFT 2121 at CCSF Joins Picket
by Labor Video Project Wednesday Jun 22nd, 2016 9:01 PM 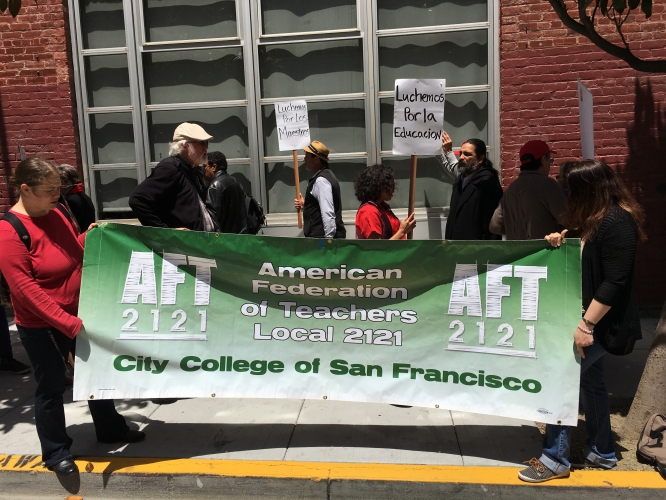 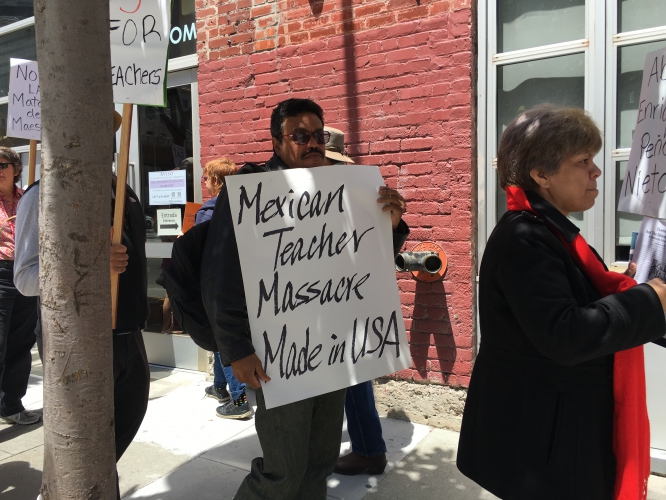 original image (4032x3024)
The US has pushed NAFTA which has privatized the Mexican economy and now they want to destroy public education for profit. The massacre is a direct result of the US corporate economic policies of deregulation, privatization and union busting.
https://youtu.be/4RrK-S3Q9qs
§Driscolll's Slave Labor Of Children in San Quintin
by Labor Video Project Wednesday Jun 22nd, 2016 9:01 PM 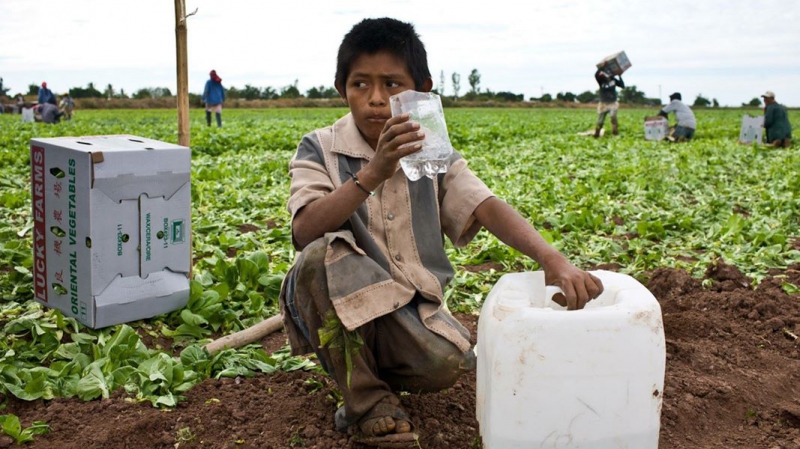 original image (1067x600)
Driscoll and other US multi-nationals use child labor and slave like conditions of indigenous people for greater profits and these people are in charge of agriculture in California
https://youtu.be/4RrK-S3Q9qs
§No Privatization of Mexican Education
by Labor Video Project Wednesday Jun 22nd, 2016 9:01 PM 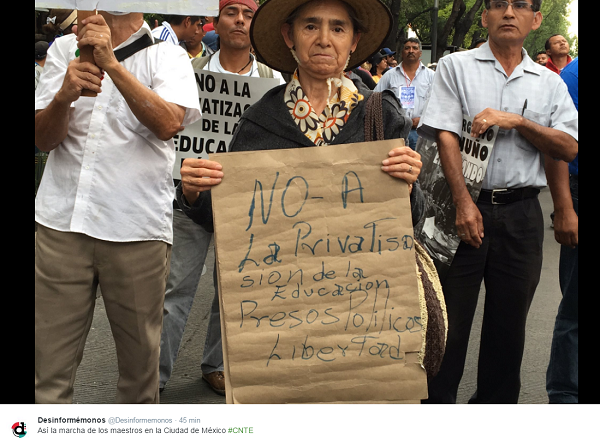 Teachers and the working people are facing a life and death struggle to stop the privatization and destruction of their education system. This privatization is backed up with US supplied helicopters, machine guns and tanks.
https://youtu.be/4RrK-S3Q9qs
§Mexican CNTE Teachers March
by Labor Video Project Wednesday Jun 22nd, 2016 9:01 PM 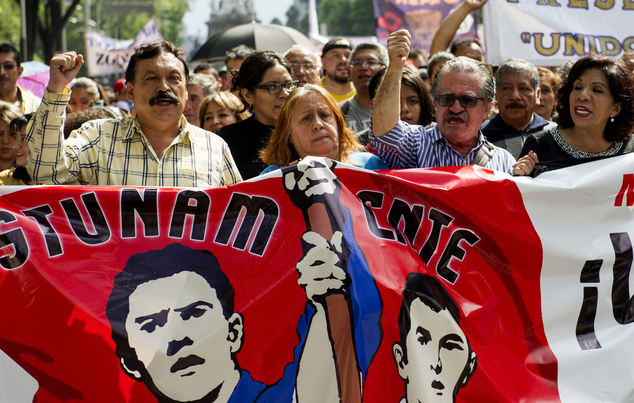 The Mexican independent teacher's union has mobilized to stop the union busting and privatization and the US controlled government has murdered their members and jailed many of their leaders.
https://youtu.be/4RrK-S3Q9qs
§Obama Is Backing the Murderous and Corrupt Mexican government
by Labor Video Project Wednesday Jun 22nd, 2016 9:01 PM 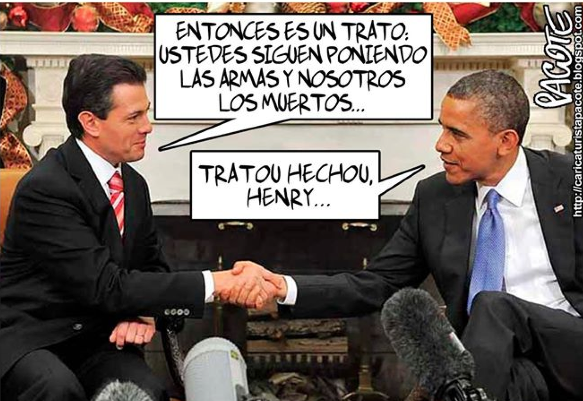 The Obama administration is fully behind the privatization of Mexico's education system and it's oil industry for greater profits for US multi-nationals.
https://youtu.be/4RrK-S3Q9qs
§US Military Targets Indigenous People For Murder and Repression
by Labor Video Project Wednesday Jun 22nd, 2016 9:01 PM 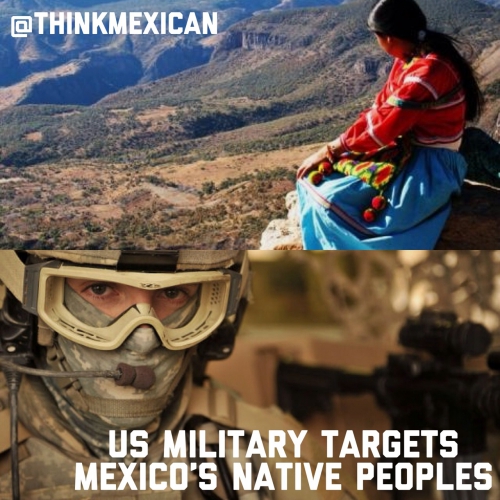 original image (1280x1280)
The US military has targeted the Indigenous people of Mexico forcing them off their land and then pushing them to be used as slave labor for US multinationals on the border. This is the policy of both the Democrats and Republicans who backed NAFTA and the full militarization of Mexico.
https://youtu.be/4RrK-S3Q9qs
§Funeral For Teachers In Oaxaca
by Labor Video Project Wednesday Jun 22nd, 2016 9:01 PM 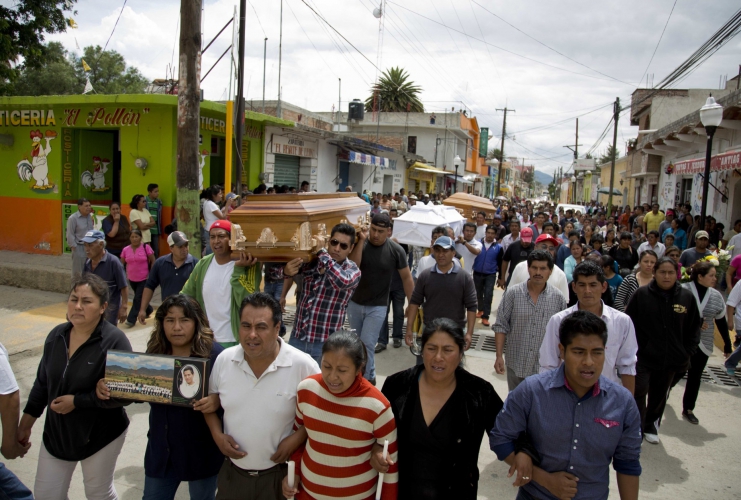 original image (1860x1254)
The teachers and community bury their martyrs after their murder by the Mexican military and police backed up by the US government. Both Obama and Hillary Clinton have been completely silent about this mass repression and murder yet the AFL-CIO is supporting these same capitalist politicians.
https://youtu.be/4RrK-S3Q9qs
Add Your Comments
LATEST COMMENTS ABOUT THIS ARTICLE
Listed below are the latest comments about this post.
These comments are submitted anonymously by website visitors.