Add an Event
Newswire
Calendar
Features
Home
Donate
From the Open-Publishing Calendar
From the Open-Publishing Newswire
Indybay Feature
Publish to Newswire
Add an Event
Related Categories: California | Central Valley | U.S. | Animal Liberation | Environment & Forest Defense
State Evidence Suggests New Wolf May Be in California's Lassen County
by Center for Biological Diversity
Wednesday Jun 22nd, 2016 5:23 PM
SAN FRANCISCO, June 22, 2016 — New evidence released by the California Department of Fish and Wildlife suggests there may be a wolf in Lassen County. The information — not yet conclusive — includes photos from four trail cameras between August and May and a hair sample from one of the sites. While DNA test results were inconclusive as to whether the animal is a wolf, dog or wolf-dog hybrid, the fact the animal persisted through the winter in this remote location leads agency officials to believe the animal is likely a wolf. The animal is not wearing a radio-collar, so its movements will be detectable only by trail camera, tracks, scat and sightings. 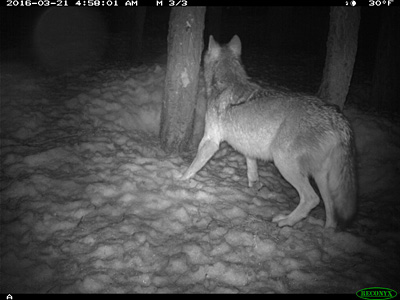 “We’re crossing our fingers that another wolf has arrived in California as part of the ongoing recovery of wolves across the West,” said Amaroq Weiss, West Coast wolf organizer with the Center for Biological Diversity. “Wolves continue to prove what scientists have said all along – that California has great habitat for wolves.”

The first wolf in nearly a century to enter California was OR-7, a radio-collared wolf from Oregon that dispersed from the Imnaha pack in northeastern Oregon and entered California in late 2011. OR-7 ranged across seven northeastern counties in California before returning to southwestern Oregon, where he found a mate and has now had litters of pups for three consecutive years. Then, in August 2015, California’s first known wolf family was confirmed from trail camera images captured in Siskiyou County. Named the Shasta pack, the all-black wolf family was comprised of two adults and five pups. And in December 2015, wolf OR-25, also originally from the Imnaha pack, crossed the border into California for three weeks before returning to Oregon, and has made several more forays into the Golden State since that time.

The California Department of Fish and Wildlife also reported this month that scat samples from the two adults and four pups of the Shasta pack collected last October have been DNA-tested, and the results indicate that both the breeding male and female adults are related to wolves from Oregon’s Imnaha pack. Of the four pups whose scat was tested, one is female and the other three are males

Gray wolves (Canis lupus) are native to California but were driven to extinction in the state by the mid-1920s. After OR-7 dispersed from Oregon into California, the Center for Biological Diversity and allies petitioned the state to fully protect wolves under California’s state endangered species act. In June 2014 the California Fish and Game Commission voted in favor of the petition, making it illegal to intentionally kill any wolves that enter the state. In 2012 the California Department of Fish and Wildlife convened a citizen stakeholder group to help the agency develop a state wolf plan for California, and then circulated a draft version of the plan for public comment in early 2016. The agency anticipates releasing the final version of the plan sometime this year.

“With the potential confirmation of another wolf in California, we’re glad that that these magnificent animals are fully protected under state and federal law because each new wolf we gain is critical for the species to be able to recover here,” said Weiss. “We drove this species to extinction here and we are extremely fortunate to get a second chance to see these ecologically essential and beautiful animals return.”


The Center for Biological Diversity is a national, nonprofit conservation organization with more than 1 million members and online activists dedicated to the protection of endangered species and wild places.

Center for Biological Diversity
http://www.biologicaldiversity.org/
Add Your Comments
Support Independent Media
We are 100% volunteer and depend on your participation to sustain our efforts!