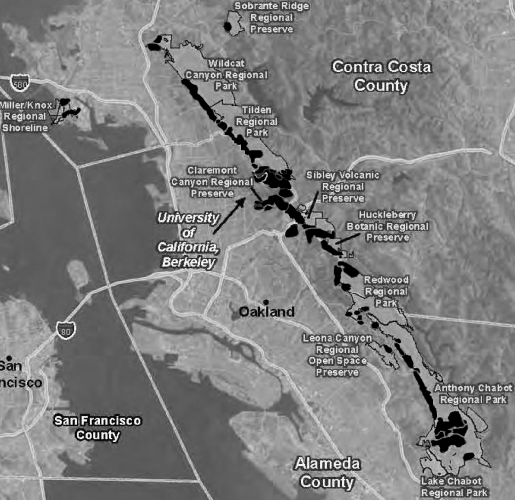 STOP THE DEFORESTATION AND

POISONING OF THE EAST BAY HILLS!

UC Berkeley, the East Bay Regional Park District, the City of Oakland, and others, with funding from FEMA and other public moneys, plan to kill over 450,000 healthy trees in the East Bay hills, some over a hundred years old, on over 2,000 acres of public lands from Point Richmond to Castro Valley.

The destruction has already started, and is expected to escalate as early as August, the end of the official nesting season, unless we stop it.
Millions of animals will die from the loss of homes and food and the devastation left by bulldozers, chainsaws, and poison, and the air quality and climate in the Bay Area will suffer. Large amounts of herbicides are planned to be applied over a 10-year period, including Roundup (glyphosate, Monsanto), Garlon (triclopyr, Dow), and Stalker (imazapyr, BASF).
These pesticides have been shown to cause serious health problems in both humans and animals, as well as complex negative ecological impacts on forest organisms. They persist in the soil, and have found their way into watersheds and ground water. Roundup has been banned in many countries because of its toxicity, and the World Health Organization recently classified glyphosate as a 2A probable carcinogen. The poison would affect everyone who uses the parks, and wash into the bay from the creeks. Do we need more cancer and chronic illness?
When asked for public comment about one of the most important parts of cities -- our parks and open space -- of the 13,000 people who responded, 90% opposed the plans. Since then, over 65,000 have signed a petition demanding the projects be stopped. Why is the will of the people being ignored?
Under the guise of fire safety, the agencies involved plan to kill moisture-rich forests that precipitate over 10 inches of water from fog drip in the midst of drought.  According to FEMA, the goal is to transform much of the East Bay parks landscape into "grassland with islands of shrubs", but this will increase fire danger by creating a highly flammable environment where fires can spread quickly, driven by winds unimpeded by tall trees. Our once beautiful parks will be barren and desolate, and when the rains start, the landslides will come.
These destructive actions are driven in large part by the ideology that the eucalyptus, acacia, and Monterey pines are non-native plants, that are harmful to native ecosystems. Conservation biologist David Theodoropoulos thoroughly debunked this ideology at a recent event in Berkeley, viewable online at youtube.com/watch?v=n1i3RP7eDFc
Eucalyptus are the preferred nesting site for eagles, hawks, and large owls, and preferred resting site for migrating Monarch butterflies. They also feed hummingbirds, bees, and other pollinators. Monterey pines create incredible animal and plant diversity. A survey of 173 ornithologists reported that 47% of birds eat from non-native plants.
In spite of the myths, eucalyptus are actually less flammable than native bay laurels. Firefighter David Maloney, appointed to the Oakland-Berkeley Mayors' Firestorm Task Force to investigate the causes of the 1991 Hills Fire and make recommendations to prevent its recurrence, said:
"The Task Force Report concluded that the spread of the fire was mostly due to the radiant heat generated by burning houses… The spread of the fire was not due primarily to burning trees -- eucalyptus or any other species."
For more details, visit these websites:

Get in touch, and get involved:

.
Added to the calendar on Mon, Jun 20, 2016 4:03PM
Add Your Comments
Support Independent Media
We are 100% volunteer and depend on your participation to sustain our efforts!