by Dean Shelton
The membership of Familias has grown to more than 300 members. Some members are local, but many travel from California and parts of Mexico. Since 2013, Familias has improved the living and working conditions of their members. This includes increasing wages, securing clean bedding and mattresses, having retaliatory bosses removed, and securing back pay for over 30 farmworkers. Despite this substantial progress, their work is still not done. 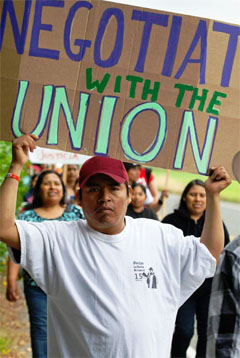 As I sit and write this story, the berry fields of Skagit Valley, Washington, are soon to be harvested. Since 2013, the berry crops have been surrounded by controversy, becoming a fight over the basic human rights that many of us take for granted.

This fight for justice for a group of farmworkers formally began three years ago, but unofficially started many years earlier after demands to improve working and living conditions fell on the deaf ears of an unjust employer. This movement to improve conditions led to the creation of Familias Unidas por la Justicia (Familias), an independent farmworkers’ union based in Burlington, Wash.

This historically rich agricultural community has seen migrant families travel in and out over the years to pick its crops, but in recent years, as agriculture has changed, so has the migrant worker. Many of these workers are now second or third generation workers whose families have worked loyally for Sakuma Brothers. But after years of attempting to improve conditions, the workers said “Enough!” and organized to form a union. Ironically, the Sakuma family themselves were Japanese migrants, interned during World War II and subjected to conditions similar to those that their workers were attempting to improve.

In addition to their struggles with the company, the farmworkers are also subjected to the stereotypes put forth by the community. Many community members still refer to migrant laborers as “illegals” or “temporary workers,” despite the fact that these workers are simply asking to receive what they deserve. Arguments that the employer cannot afford to improve working conditions have also been a basis for community support of the employer, but with annual earnings estimated at $20 million, financial hardship is clearly not the case.

Today, the membership of Familias has grown to more than 300 members. Some members are local, but many travel from California and parts of Mexico. Since 2013, Familias has improved the living and working conditions of their members. This includes increasing wages, securing clean bedding and mattresses, having retaliatory bosses removed, and securing back pay for over 30 farmworkers. Despite this substantial progress, their work is still not done.

Sakuma Brothers is a major provider of berries for companies such as Driscoll’s, and a boycott campaign has been spreading nationwide in an attempt to force Driscoll’s to stop buying Sakuma berries.

In addition to the boycott, the leadership of Familias, led by Ramon Torres, continues to work to bring recognition to their workers against their unjust employer. One such recognition included a wage and hour lawsuit that was settled with Familias for a record $850,000. However, instead of admitting guilt for wage theft, Sakuma Brothers continues to deny responsibility and has held out from returning to the negotiation table.

Community support for Familias has slowly been gaining momentum. Familias continues to ask people to boycott Driscoll’s. Their fight with Sakuma Brothers will continue until these farmworkers are recognized and treated fairly. Organized labor and support from students at a liberal arts college in Bellingham, WA, has been helpful in the fight. Known as “Western Washington University Students for Farm Workers Justice,” this student group has been a boost to Familias as they continue their fight for justice in the workplace.

Readers wishing to support Familias can do so by boycotting Driscoll’s products, which are sold at large retailers such as Costco, supporting protests in and around their communities, and if possible, contributing financially to the cause. The plight of the farmworkers is far from over. The work they do needs to be respected and basic human rights must be met. For more information on their movement, visit their website (https://boycottsakumaberries.com/).

----------------------------
Dean Shelton is the 10th District Representative of the Washington State Council of Fire Fighters. This column, originally posted by the ILR School at Cornell University, was written before the June 9 walkout, the latest in a series of work stoppages at Sakuma Brothers over low pay and poor working conditions. 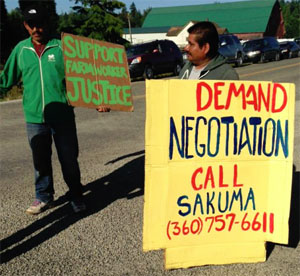 END_OF_DOCUMENT_TOKEN_TO_BE_REPLACED
Add Your Comments
Latest Comments
Listed below are the latest comments about this post.
These comments are submitted anonymously by website visitors.
TITLE
AUTHOR
DATE
Uniting for Justice: Winners and Losers of the Week
AFL-CIO
Support Independent Media
We are 100% volunteer and depend on your participation to sustain our efforts!