Puerto Rico: The Fight Against Colonialism, Capitalism, and Imperialism 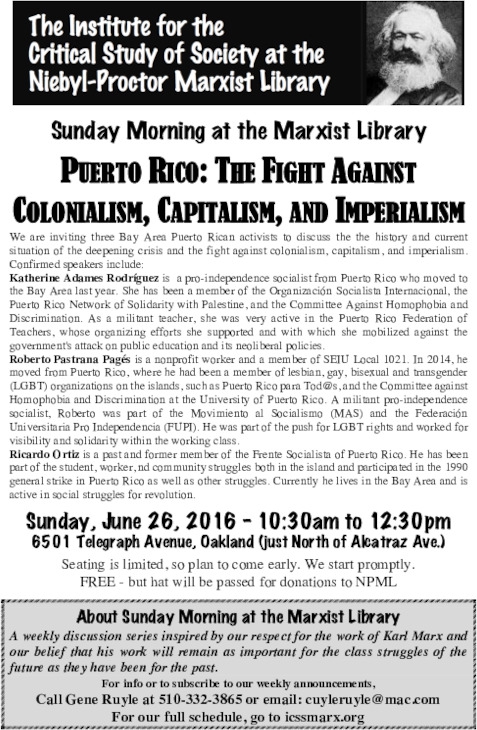 Puerto Rico: The Fight Against Colonialism, Capitalism, and Imperialism

We are inviting three Bay Area Puerto Rican activists to discuss the the history and current situation of the deepening crisis and the fight against colonialism, capitalism, and imperialism. Confirmed speakers include:
Katherine Adames Rodríguez is  a pro-independence socialist from Puerto Rico who moved to the Bay Area last year. She has been a member of the Organización Socialista Internacional, the Puerto Rico Network of Solidarity with Palestine, and the Committee Against Homophobia and Discrimination. As a militant teacher, she was very active in the Puerto Rico Federation of Teachers, whose organizing efforts she supported and with which she mobilized against the government's attack on public education and its neoliberal policies.
Roberto Pastrana Pagés is a nonprofit worker and a member of SEIU Local 1021. In 2014, he moved from Puerto Rico, where he had been a member of lesbian, gay, bisexual and transgender (LGBT) organizations on the islands, such as Puerto Rico para Tod@s, and the Committee against Homophobia and Discrimination at the University of Puerto Rico. A militant pro-independence socialist, Roberto was part of the Movimiento al Socialismo (MAS) and the Federación Universitaria Pro Independencia (FUPI). He was part of the push for LGBT rights and worked for visibility and solidarity within the working class.
Ricardo Ortiz is a past and former member of the Frente Socialista of Puerto Rico. He has been part of the student, worker, nd community struggles both in the island and participated in the 1990 general strike in Puerto Rico as well as other struggles. Currently he lives in the Bay Area and is active in social struggles for revolution.

END_OF_DOCUMENT_TOKEN_TO_BE_REPLACED
Added to the calendar on Thu, Jun 16, 2016 2:58PM
Add Your Comments
Support Independent Media
We are 100% volunteer and depend on your participation to sustain our efforts!