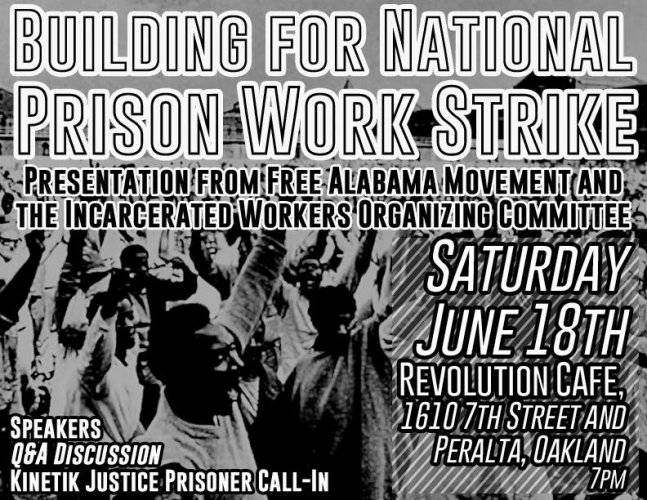 Import event into your personal calendar
Date:
Saturday, June 18, 2016
Time:
7:00 PM - 10:00 PM
Event Type:
Panel Discussion
Organizer/Author:
Oakland IWOC
Location Details:
Revolution Cafe, 1610 7th Street. Revolution Cafe is located right next to Peralta Ave in West Oakland and is walking distance from West Oakland BART. For AC Transit, take 26 bus route, get off on 7th and Peralta. Plenty of parking. Kid friendly event.
On September 9th, on the 45th anniversary of the Attica Prison Uprising, grassroots prison movements on the inside have called for a national strike against prison slavery. Millions of workers are working for practically free inside American prisons amid horrible conditions. This is why prison strike organizers see the systems of mass incarceration to be a continuation of chatel slavery, based upon exploitation and white supremacy.

In this context, groups such as Free Alabama Movement, Free Virginia Movement, Free Ohio Movement, and many more are pushing to build links with groups on the outside to support this strike and demand an end to prison enslavement.

The Incarcerated Workers Organizing Committee (IWOC) was formed by IWW members to supported this work in the wake of the riots that broke out in Holman prison in Alabama. IWOC works to be a megaphone and switchboard for prisoners to organize with each other, unionize, and build solid bridges with people on the outside. Now with over 800 members in prisons across 36 states, IWOC members have been taking collective direct action, such as the work stoppages organized in multiple Texas prisons in April.

Now, with prison rebels across the US pushing towards the national strike on September 9th, those on the inside need us to generalize this struggle. Join us!

Kinetik Justice: Prison strike organizer and co-founder of the Free Alabama Movement, will be calling from solitary confinement at Holman Correctional Facility. In regard to the Free Alabama methods, Kinetik says, "These strikes are our methods of challenging mass incarceration, as we understand the prison system is a continuation of the slave system."

Nick, Minneapolis: Incarcerated as a juvenile and an adult, currently member of the IWW and the IWW's General Defense Committee.

Brianna, Kansas City: Founder of IWOC, was imprisoned for a year.

Cole, Oakland: Incarcerated in jail and prisons in Michigan for 3 years, and currently a member of IWW and IWOC Oakland chapter.

For more info: IWOC-oakland [at] iww.org. IWOC Oakland meets once a month. Contact us for details.

Donations will go towards helping One Fam with costs of running the space.

More info:
Let the Crops Rot in the Field: https://freealabamamovement.wordpress.com/category/let-the-crops-rot-in-the-field/

This is a Call to Action Against Slavery in America:
https://itsgoingdown.org/call-action-slavery-america/
END_OF_DOCUMENT_TOKEN_TO_BE_REPLACED
Added to the calendar on Thu, Jun 9, 2016 1:17PM
Add Your Comments
Support Independent Media
We are 100% volunteer and depend on your participation to sustain our efforts!