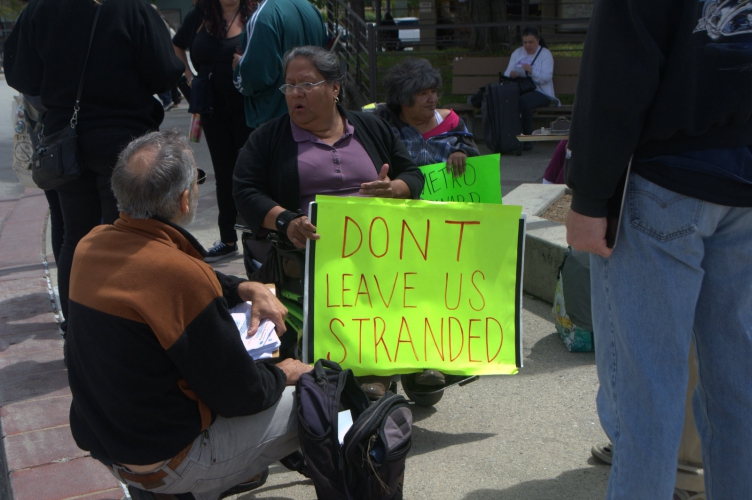 “We're out here for the community,” says Mario Torres, a bus driver with Santa Cruz METRO. Torres and a group of community activists from many walks of life were present at the downtown METRO station on Pacific Avenue.

“I'm concerned because we're cutting routes to social services that are already in limited supply.” Among the threatened routes, Torres cites the 74, which takes riders to the Social Security office in Watsonville, the 69A, which runs to the Watsonville Hospital, and the 71 to Dominican Hospital. Under METRO's latest service reduction plan (as of May 11th) 74 is set to be cut outright, 69A will lose service between 9:50am and 3:50pm, and the 71 will run half as often, every 30 rather than every 15 minutes.

According to documents provided at a METRO public comment meeting at Louden Nelson Community Center on May 3, “METRO needs to reduce its annual operating budget by $6.5 million for the next fiscal year.” Torres says that money is available in the system's coffers, in reserves that used to be available for operations funding but are now off limits as a “rainy day fund.”

At its peak today almost 20 people stand beneath the clock in the center of the METRO station. Some walk, or roll in electric wheelchairs, around the concrete island there. They carry neon construction paper signs and chant slogans like “Save the routes!” and “Save the bus!” A pair of UCSC students is present in support of the rally.

“I'm here because I care about public issues. I feel like this is an issue for people of color like myself. I ride the bus in Long Beach, where I'm from and the people on the bus there are low-income, workers, people of color, students, houseless people,” says one of the pair.

The cuts to the METRO system aren't limited to service. The employment of METRO workers is also on the line. Torres says that, of the almost 160 drivers in the bus system, 43 may lose their jobs.

“But there are no cuts in management or supervisor positions,” he says with some outrage. “No cuts in mechanics, but they have three open spots that they just aren't going to hire for, so...”

Dan Stevenson, an 18-year veteran METRO driver, says the cuts are connected to a lack of buses and a failure in METRO leadership to pursue funding. “Alex Clifford [the new METRO CEO] told me they have to retire 70 buses in the next 5 years,” Dan says, shocked himself. The existing bus fleet is aging, and many of the vehicles have been used far longer than their intended operational life. Dan thinks that METRO is making service reductions in advance of a major shortfall in actual buses that will be available to the system. However, the way he sees it, funding is available to keep the system functioning.

“Naming rights for the new METRO center. Tolls or taxes, like an emissions tax on new cars sold. Public-private partnerships with entities in the area.” These ideas are just some of the possible solutions that Dan mentions in the space of a minute.

One funding solution of interest is the Regional Transportation Commission's proposed sales tax measure that will be on the ballot in November. If passed, the half cent sales tax in the measure could provide millions of dollars for transportation in upcoming years. The trouble for the bus system however, is how that funding is allocated. A considerable proportion of the money from the proposed measure is aimed at widening Highway 1 to accommodate more auto traffic. The cost of this endeavor is estimated at over $100 million, according to the website of the Campaign for Sustainable Transportation, which advocates to fund hiking trails, trains, and bicycle access.

The METRO board is expected to finalize cuts to the system in June. Their decisions will then take effect in September of this year. Three public hearings remain until then: May 26th at 6pm in the Watsonville City Council Chambers, May 27th at 8:30am in the Santa Cruz City Council chambers, and finally June 24th at 8:30am again in the Santa Cruz chambers. Additionally, the organizers of today's rally have planned a march on May 26th beginning 11am at the base of the UC Santa Cruz campus.
§Posing in front of OUT OF SERVICE bus
by Zav Hershfield Sunday May 22nd, 2016 11:28 AM 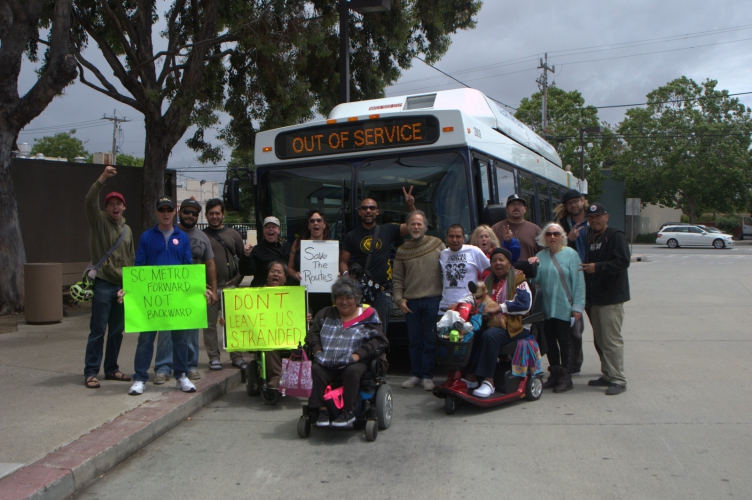 original image (1600x1063)
Add Your Comments
LATEST COMMENTS ABOUT THIS ARTICLE
Listed below are the latest comments about this post.
These comments are submitted anonymously by website visitors.