original image (1661x566)
James Burtnett of Boulder Creek California, faces multiple felony counts ranging from illegally synthesizing a Schedule 1 narcotic, to being illegally armed with a firearm. According to court documents, Burtnett was involved in a narcotic processing operation. Due to the high concentration of extremely flammable, toxic chemicals involved, the illegal lab exploded on September 29th, 2013 on 3rd Street in Santa Cruz, California.

Three males in their early 20s who were present when the lab exploded were severely burned over nearly 70% of their bodies, and according to Deputy Police Chief Steve Clark, “They not only put themselves at risk, they put that entire neighborhood, and especially that entire apartment complex at a very high state of risk with their activities.” The burns sustained by the 3 men present were so severe that in an article on October 3, 2013 in the Santa Cruz Sentinel quoted police chief Steve Clark as saying, “The men, who were flown to Valley Medical Center, are in a medically induced coma. A criminal investigation is underway and there is a possibility of prosecution. Should any of the men die, the investigation could turn into a homicide investigation…Our hope is that they do recover from their injuries. We hope for the best for them but there is that responsibility component that comes into play as well."

According to a post on the Take Back Santa Cruz Facebook Page dated Sept. 29, 2013 (see below), Burtnett had to stay away from the apartment complex due to the explosion. Fellow Take Back Santa Cruz member Sharon de Jong stayed with Burtnett and his two dogs while the crime scene was contained and investigated by authorities. On TBSC’s Facebook page there was never any mention of Burtnett’s involvement with the illegal narcotics manufacturing lab, just that he had to stay away from the apartment due to its proximity to the explosion and subsequent fire. Several members speculated that it was a meth lab fire. Later in the thread, de Jong indicated that Burtnett’s apartment was attached to the crime scene, stating, “…several people were evacuated due to the attached laundry room catching fire. James was one of them.”

Always wanting to feel like she’s in the thick of the action, Take Back Santa Cruz founder Analicia Cube chimed into the thread stating, “Is James OK? Does anyone need anything?” Clearly Burtnett is a high ranking member of the Take Back Santa Cruz junta. He has been a very vocal part of the group for several years, and can often be seen in group photographs with the rank and file Take Back leaders. Most notably he is front and center in the infamous “Gladys Kravitz” photo featured on the first page of the Take Back website, where members proudly flaunt their surveillance tactics and busy-body presence in the community. Unfortunately the group conveniently forgets to focus on their own member’s transgressions.

In line with many Take Back members who are obsessed with firearms, the community should be extremely alarmed that Burtnett is also being charged with,”Special Allegations-Personally Armed/ Firearm Controlled Substance.” Court documents state, “It is further alleged that in the commission and attempted commission of the above offense the Defendant was personally armed with a Springfield .40 caliber handgun and a Steven 12 Gauge shotgun within the meaning of Penal Code 12022 (c)” Burtnett’s online social media accounts are littered pro-gun messages.

Other charges against Burtnett include “Possession of Marijuana For Sale,” another “Special Allegation-Armed With a Firearm” violation, and a probation violation. Burtnett’s trial was set for February 22, 2016, but has been rescheduled for a later date so that Fire Investigators can have more time to continue their investigation. Burtnett remains free on his own recognizance.

The other men involved in the narcotic lab explosion didn’t fare as well as Burtdett. It was discovered that at least two of them have crowd funding pages to assist with medical expenses incurred from treating their severe burns. Some of the photos found online are extremely alarming, and show the magnitude of the explosion:

May 21st, 2016, TBSC member Ronald Paul Hughes posted a link to the Santa Cruz Sentinel article on the criminal sentencing to the Take Back Santa Cruz Facebook page (see below). The post was deleted in the early morning hours of the same day even thought it didn’t appear to violate TBSC’s terms of use. This selective censorship by a group who claims to be concerned with public safety is all too common. If putting a neighborhood at risk of explosion with an illegal drug manufacturing lab doesn't qualify as a public safety issue, then Take Back Santa Cruz should reanalyze their platform.

For more information see the links below. 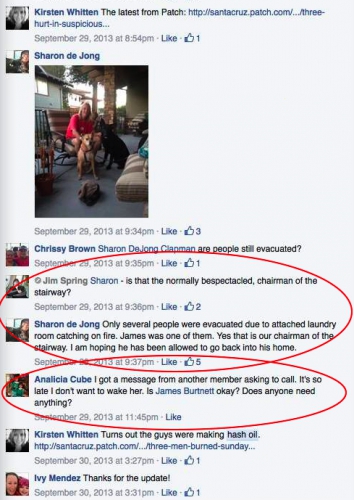 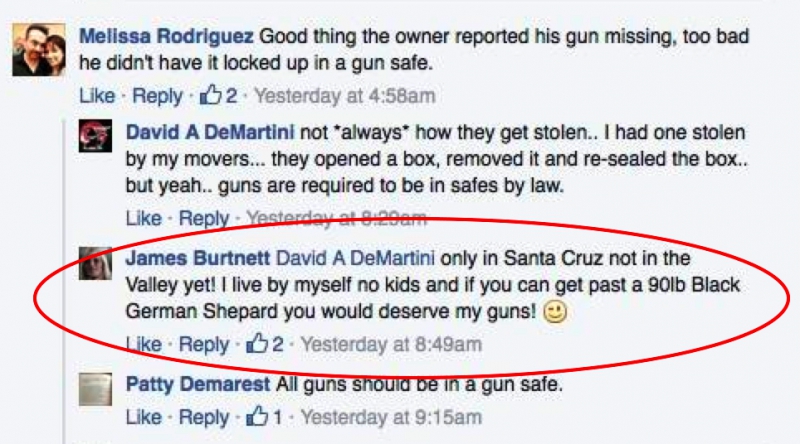 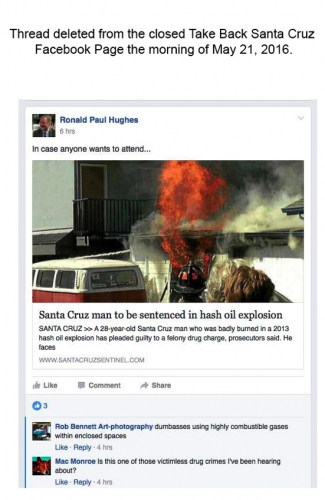 original image (2488x1173)
January 6, 2014. Samantha Olden of Take Back Santa Cruz tells James Burtnett that the photo of him and his dog is a "Bitchin picture!"
§September 19: Will Take Back Santa Cruz "Save The Date"?
by Cowabunga, dude Wednesday Jun 15th, 2016 4:56 PM
60-year-old James Patrick Burtnett has a Trial Readiness Conference scheduled for September 14, 2016 at 9:00 AM before Judge John Salazar, followed by a Jury Trial on September 19, 2016, also at 9:00 AM before Judge Salazar.
Add Your Comments
LATEST COMMENTS ABOUT THIS ARTICLE
Listed below are the latest comments about this post.
These comments are submitted anonymously by website visitors.