Newswire
Calendar
Features
Home
Donate
From the Open-Publishing Calendar
From the Open-Publishing Newswire
Indybay Feature
Publish to Newswire
Add an Event
Related Categories: Santa Cruz Indymedia | Government & Elections | Health, Housing & Public Services | Police State & Prisons
Petition to Councilmember Comstock for public restroom support
by via the Give A Shit! Campaign
Thursday May 19th, 2016 4:43 PM
The following letter was sent to Councilmember Pamela Comstock this Tuesday, asking for her support in establishing 24 hour public restrooms that are accessible to people with disabilities in downtown Santa Cruz. 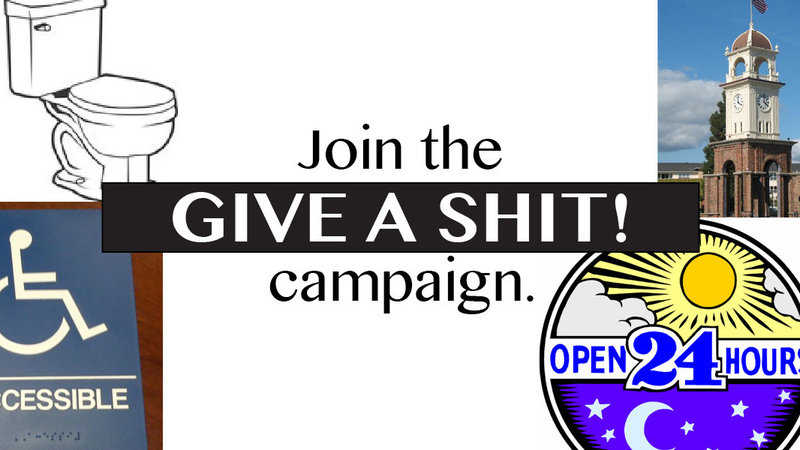 We email you with regard to the issue of public bathrooms in the downtown area of Santa Cruz. We are a group of concerned citizens who have organized ourselves to raise awareness among fellow residents about the lack of 24 hour, public restrooms in downtown that are accessible to people with disabilities.

Our position is that the only 24 hour toilet downtown - the porta-potty on Front and Laurel - is entirely inadequate for the needs of the area. The porta-potty is placed on the edge of downtown, is not at all ADA compliant, and is often abused and full of trash. As already stated, it is the ONLY 24 hour toilet available downtown, meaning that folks who’ve really gotta go and can’t wait - perhaps due to the long walk from the clock tower, or to a disability that eliminates bowel control - are likely to experience an unnecessary and humiliating bowel movement.

We think there is considerable enthusiasm in the community for more bathrooms. We have circulated a petition since April that has collected close to 200 signatures in support of more restrooms. In our tabling and flyering downtown we’ve spoken to many people who express support for the idea that such a commonsense utility be supplied by the city. We have also seen support on the neighborhood social media platform “Nextdoor,” such as these quotes:

“JJ Beneda from SAGE-SCNeighbors 27 Mar
Coming from the south, adjusting to the lack of publicly available toilets even for customers has not been easy.“

We think the business community would support this move as well, considering new laws making their way across the country which require businesses to open their restrooms to people with conditions affecting their bowel control. See the “Restroom Access Act” in Illinois for more information. We do not think the burden of restroom provision should be moved onto businesses, due to increased costs associated with maintenance. We also do not think that anyone should be required to announce their need to use a restroom or justify that need to any business employee or owner - another reason why we support publicly accessible toilets.

We understand that you supported a one-year pilot program to open 24 hour restrooms last year, which were closed early due to staff concerns. We plan to continue gathering support in the community and would like to ask for your help in moving the issue before the council again, perhaps with solutions in place to curb problems which occurred with the previous iteration of the restroom program. Our group agrees that 24 hour, ADA compliant restrooms downtown should fulfill the following requirements:

- the restrooms are centrally located in the downtown area
- the restrooms are all ADA compliant, especially to allow wheelchair/powered-chair access
- there are more than one toilet available in each restroom
- the toilets are regularly cleaned and maintained

We think these are reasonable requirements that will provide dignified, all-hours access to toilet facilities for people with a variety of needs.

Zav Hershfield
with the Give A Shit! Campaign


Give A Shit! Campaign Petition:
Open 24 hour handicap accessible toilets for downtown Santa Cruz
https://www.change.org/p/mark-r-dettle-open-24-hour-handicap-accessible-toilets-for-downtown-santa-cruz
Add Your Comments
LATEST COMMENTS ABOUT THIS ARTICLE
Listed below are the latest comments about this post.
These comments are submitted anonymously by website visitors.