Newswire
Calendar
Features
Home
Donate
From the Open-Publishing Calendar
From the Open-Publishing Newswire
Indybay Feature
Publish to Newswire
Add an Event
Related Categories: East Bay | International | Global Justice & Anti-Capitalism | Racial Justice
More Nazi Posters Found in Berkeley by UC Campus
by Berkeley Resident
Wednesday May 18th, 2016 5:02 PM
On Monday, another poster from the Neo-Nazi group, Identity Europa, headed by rank and file fascist activists and the youth wing of the American Freedom Party, was found on the West side of Le Conte and Euclid Ave, only two blocks north of UC Berkeley. The poster was wet; it had just been put up. This comes hot on the heels of a recent Neo-Nazi and fascist rally at UC Berkeley where around 20 white nationalists gathered with UC police protection. 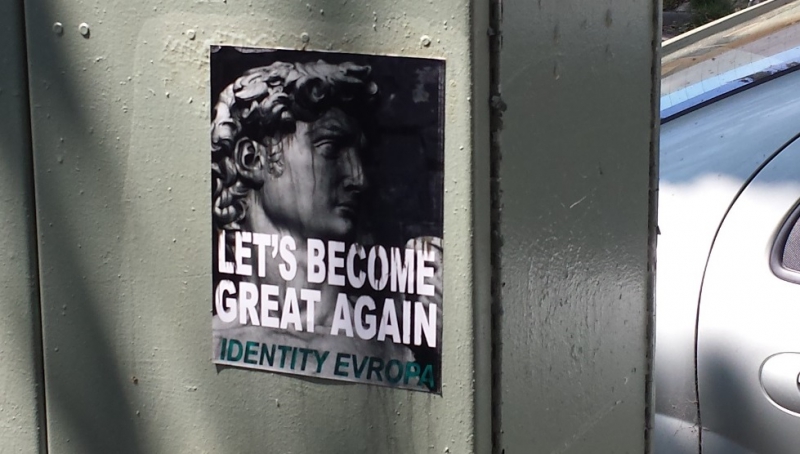 original image (979x556)
On Monday, May 16th, at around 3pm, a poster for the Neo-Nazi group, Identity Europa, was found in an up-scale neighborhood in Berkeley, just two blocks up from the North Gate of the university on Euclid Ave. The poster read, “Let's Become Great Again,” and featured a Greek Statue along with the words, “Identity Europa.” While the area is extremely upscale, it is also filled with student housing and apartments. When the poster was ripped down from the utility box it was attached to, paste was found all over it. This was a hot day and the only way that poster could have been wet at that time is if someone had just put it up.

Identity Europa is one of the groups that recently rallied at UC Berkeley that includes known Neo-Nazi and white nationalist activists, including Nathan Damigo, who has a felony for carrying out a hate crime against a cap drier. Another is John Hess, a Neo-Nazi who campaigned against Leftist professors at a university in Arizona. The group was formerly called the National Youth Front, and are the youth wing of the American Freedom Party, a group founded by white power skinheads that includes former organizers who have worked with David Duke and other Neo-Nazi and KKK groups. They currently are endorsing Donald Trump for President and conducing robo-calls urging all white people to cast their vote for “the Donald.”

This is currently the second Neo-Nazi poster (the first according to the website, itsgoingdown.org in a submitted article, “Big Nazi on Campus,” was found at University and Shattuck Ave) found in Berkeley since Identity Europa along with the National Policy Institute, an organization that promotes “academic racism” to millennials, headed by Richard Spencer, who was also in attendance at the rally, gathered on the campus on Friday, May 6th. Other white nationalists in attendance were involved with creating racist and fascist podcasts, such as Johnny Ramondetta, a union foreman from Local 6 in San Francisco.

It is clear that there are Neo-Nazi white nationalists living in Berkeley and are more than likely UC Berkeley students and they attempting to organize. What will the response be of the people of the bay area against fascism and racism? 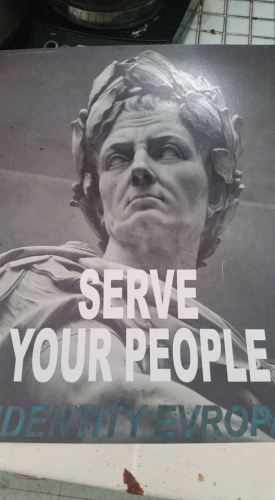 original image (528x960)
New Identity Evropa poster found in West Berkeley, pasted to a utility box on the corner of University Ave and Acton St. Glue was still wet on the back after taking down. Found around 3pm on 5-19-16.
Add Your Comments 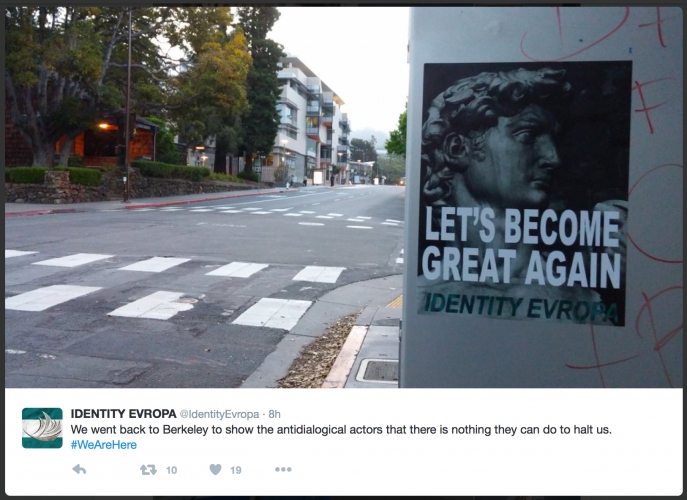 original image (1626x1182)
These racist assholes are giddy about Trump being the republican nominee and it's no accident they are co-opting his campaign slogan.
Add a Comment
Support Independent Media