Add an Event
Newswire
Calendar
Features
Home
Donate
From the Open-Publishing Calendar
From the Open-Publishing Newswire
Indybay Feature
Publish to Newswire
Add an Event
Related Categories: San Francisco | Arts + Action | Government & Elections | Police State & Prisons
Poster protests against Google-Government collusion
by Alex Mitadvida
Monday May 16th, 2016 10:41 PM
Poster art popped up in and around San Francisco to protest the rise of the Intelligence State: Google's collusion with the government, collecting information on all of us and making our political leaders dependent on this giant corporation. Bush started it, and Obama made it permanent. Google is now pulling the strings of our government. When will it end? 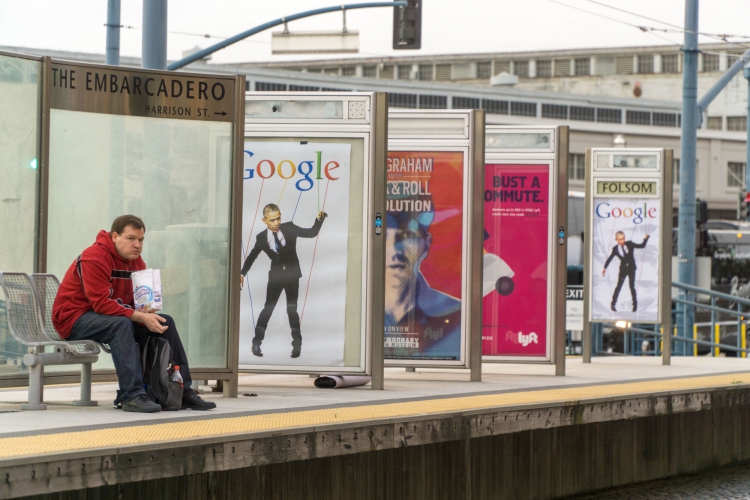 Google's increasing power over political leaders in Washington, and its collaboration with the NSA and other spy agencies, have allowed the world's largest corporation to pull the strings of power. It started under Bush and sadly grew even worse under Obama.

On May 16, art activists in San Francisco postered Google headquarters, Google Ventures, Mozilla, and other areas with satirical art showing Google to be pulling President Obama's strings. They even postered the Electronic Frontier Foundation, which the activists say has gone along with the policies that have built the Intelligence State.

They also postered The Embarcadero and the Presidio.

Nobody claimed credit for the poster protests, but they come amid reports, like the recent piece in The Intercept, detailing Google's alarmingly close relations with the White House. 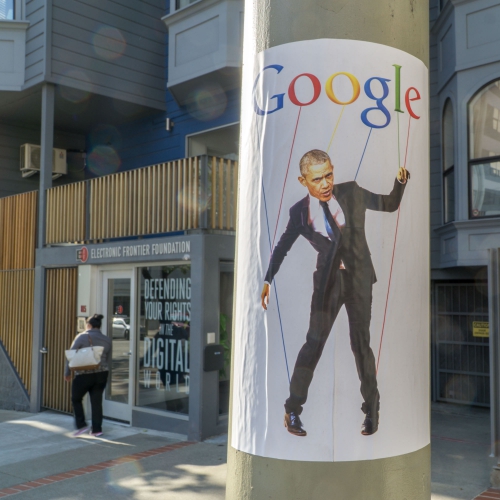 original image (2000x2000)
Add Your Comments
Support Independent Media
We are 100% volunteer and depend on your participation to sustain our efforts!