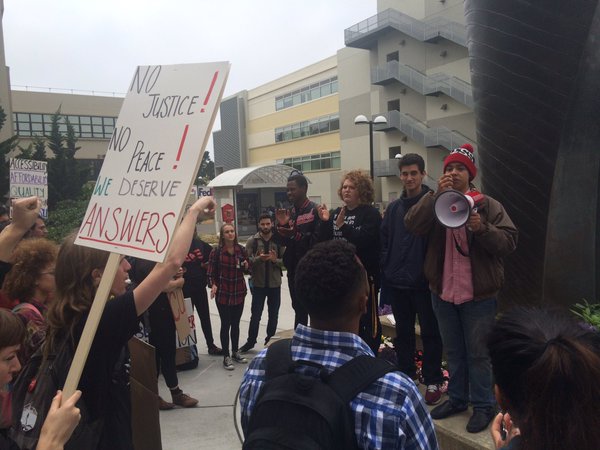 You may be aware of a 7 day hunger strike being lead by 4 SFSU students to defend and advance Ethnic Studies at SFSU. We wanted to reach out to invite you to attend and show support for the students if your schedule permits. Several SF Supervisors will be speaking along with Actor and Activist, Danny Glover. The schedule and details for tomorrow are below. Wishing you a very Happy Mothers Day!

The Chairs Council of the College of Ethnic Studies are calling for an emergency press conference on Monday, May 9th, 2016 at 12:30 on the lawn in front of the University Library in front of the student hunger strike encampment. The four students, known as the TWLF2016 (Third World Liberation Front) began an indefinite hunger strike on Monday May 2nd, 2016. Now after a week, we are calling on all of our community members to come out in solidarity to support the brave action of our students.

The Press Conference will feature speeches and support statements from:

This press conference is being called to:

1). Express our College’s support for the Students on Hunger Strike
​
2). To refute the administration’s misinformation campaign and “politics of distraction”. This rhetoric includes false statements about our “overspending problem” and the scapegoating of our Dean, Dr. Kenneth Monteiro. The fact is that since 2007 there has been a systematic starvation of the College of Ethnic Studies, we have faced a 40% reduction in base support. Most of our departments have no Assistant Professor because they have not been able to hire and replace those we die or retire. Moreover, the statements from the administration have created a toxic working environment and an increasingly difficult racial climate on campus.

3. We wish to thank CSU Chancellor Timothy White for acknowledging our letter calling for a Civil Rights and Racial Discrimination investigation at SFSU which the Chancellor states will conclude by May 23rd, 2016.

4. We also want to affirm our support and solidarity with the TWLF2016 Hunger Strikers not just in words, but by initiating a rolling faculty fast in conjunction with the students on the hunger strike.

5. Finally we invite our colleagues from the California Faculty Association and the Faculty Rights Committee to launch a class action grievance on the basis of racial discrimination. We have met with our faculty rights representative and learned the following:
A. Our lectures are particularly precarious because, different from other colleges on the campus, we do not have a budget allocation for lecturers.
B. The underfunding of the college has led to an excessive and inequitable work load for our staff and faculty
C. We charge that the SFSU Provost and President have created a hostile work environment/fear of retaliation based on their revocation of two hires for Black faculty members that were previously approved and funded as replacement hires in the Department of Africana Studies.
​

San Francisco State University
1600 Holloway Avenue
San Francisco, CA. 94132
(415) 338-2701 ~ajoli [at] sfsu.edu
END_OF_DOCUMENT_TOKEN_TO_BE_REPLACED
Added to the calendar on Sun, May 8, 2016 6:50PM
Add Your Comments
Support Independent Media
We are 100% volunteer and depend on your participation to sustain our efforts!