A Evening with Jane Smiley 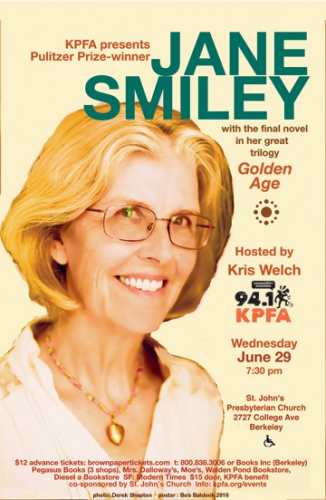 From the winner of the Pulitzer Prize: the much-anticipated final volume of her acclaimed American trilogy – a richly absorbing new novel that brings the remarkable Langdon family into our present times and beyond. Combining intimate drama, emotional suspense, and a full command of history, Golden Age brings to a magnificent conclusion the century-spanning portrait of this unforgettable family—and the dynamic times in which they’ve loved, lived, and died: a crowning literary achievement from a beloved master of American storytelling.

Jane Smiley is the author of numerous novels, including A Thousand Acres, which was awarded the Pultizer Prize, and most recently, Some Luck and Early Warning, the first volumes of The Last Hundred Years trilogy. She is also the author of five works of nonfiction and a series of books for young adults. A member of the American Academy of Arts and Letters, she has received the PEN USA Lifetime Achievement Award for Literature. She lives in Northern California.

Praise for earlier novels in the trilogy:
“Staggering…a masterpiece in the making…Intimate, miraculous—an American saga every bit as ambitious as Updike’s magnum opus” —USA Today

“Audaciously delicious, impeccably drawn…Every character steals our heart. We read these lives, and we find our own.” —Chicago Tribune

Golden Age takes readers from 1987 up to 2020, lending a prophetic eye to the world beyond the pages. There’s much to admire: Smiley’s attention to detail in each and every year; her knowledge of politics, environmentalism, and genetics; her humor; her stripped back prose.
… Smiley chronicles 20th-century life like few have, with the same scope and fastidiousness of Phillip Roth, Saul Bellow, and John Updike. —Miami New Times

Kris Welch is a veteran KPFA on-air host, a mother, and a grandmother.


END_OF_DOCUMENT_TOKEN_TO_BE_REPLACED
Added to the calendar on Sun, May 8, 2016 10:04AM
Add Your Comments
Support Independent Media
We are 100% volunteer and depend on your participation to sustain our efforts!