"How To Make White People Laugh" - An Evening with Negin Farsad 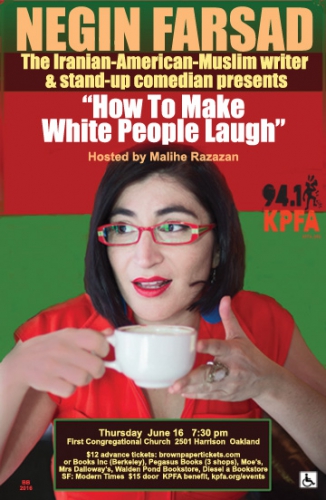 Import event into your personal calendar
Date:
Thursday, June 16, 2016
Time:
7:30 PM - 9:30 PM
Event Type:
Speaker
Organizer/Author:
Bob Baldock
Location Details:
First Congregational Church of Oakland, 2501 Harrison, Oakland
"How To Make White People Laugh" - Iranian-American-Muslim writer and stand-up comedian NEGIN FARSAD uses comedy to combat racism. Working bluntly with the elements of race we are often too politically correct to discuss, Negin offers a brilliant and clarifying look at our concepts of "Black" or "White" or "Muslim" - and how comically bad it is when white culture defines everything. She uses wit, humor, and incisive intellect. She'll be hosted by KALW and KPFA broadcast host Malihe Razazan in this KPFA benefit. Tickets available at brownpapertickets.com and many indie bookstores.
See kpfa.org/events

“How To Make White People Laugh” is the first book by the writer, director and star of the hit documentary “The Muslims Are Coming!” Her autobiographical essays about growing up Iranian-American in a post 9/11 world reveal the power of comedy to combat racism. In this candid, often hilarious book, Farsad reveals her personal experience being the “other” in a contemporary American culture that often fears anything deemed foreign. She confides a youthful longing to be African-American or Mexican at various points.

Writing bluntly about the elements of race we are often too politically correct to discuss, Farsad takes a long and clarifying look at the iconography that still shapes our concepts of “Black” or “White” or “Muslim” – and what happens when white culture defines everything. She explores what it means to have a hyphenated identity. She discusses how we can effectively combat racism, stereotyping, and exclusion. Her particular genius is in openly confronting these issues with wit, humor, and incisive intellect.

Born in Connecticut, Negin Farsad was raised in Southern California. Aspiring for a career in politics, she attended Cornell University in New York, majoring in government as well as theater arts., until she realized that her deeper passion was for writing and performing. On graduating, she settled in New York City and attended Columbia’s School of International and Public Affairs, where she earned two master’s degrees. Evenings she spent writing and performing comedy. In 2011 she was named by the Huffington Post one of “the 50 Funniest Women.” Her comedic routines often featured frank, sharp-witted views on politics, sex and the cultural dynamics of navigating her Iranian family. In 2013 she gave a TED Talk in social justice comedy. Her first musical, The Israeli-Palestinian Conflict: A Romantic Comed,” premiered at the New York International Fringe Festival. Her solo show “Bootleg Islam “ appeared in the DC, Dallas and Chicago Comedy Festivals. She produced, directed and performed on MTV and Comedy Central and was a regular contributor to The Young Turks television show. Her films include: The Muslims Are Coming, Nerdcore Rising, A Cricket in the Court of Akbar, Hot Bread Kitchen, and Iran-ing on Empty.

Malihe Razazan is the senior producer of KALW’s daily call-in program, Your Call, and the producer and cohost of Voices of the Middle East and North Africa, heard on KPFA Radio throughout Northern California.

KPFA benefit
END_OF_DOCUMENT_TOKEN_TO_BE_REPLACED
Added to the calendar on Thu, May 5, 2016 4:14PM
Add Your Comments
Support Independent Media
We are 100% volunteer and depend on your participation to sustain our efforts!