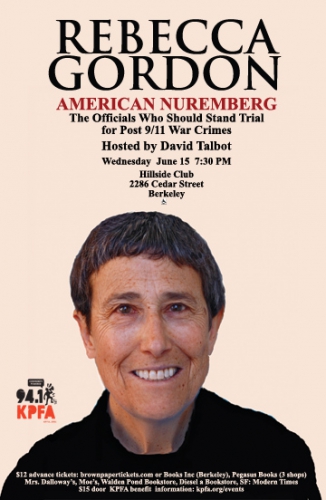 Import event into your personal calendar
Date:
Wednesday, June 15, 2016
Time:
7:30 PM - 9:30 PM
Event Type:
Speaker
Organizer/Author:
Bob Baldock
Email:
bob [at] kpfa.org
Phone:
510-848-5006
Location Details:
Hillside Club, 2286 Cedar Street, Berkeley
To this day, the people of the U.S. have had nothing like a full accounting, or reckoning, of all the wars and violence and crimes perpetrated by officials of the government in this "war on terror." Not a single high U.S. official has been prosecuted. KPFA is proud to present Rebecca Gordon, hosted by David Talbot, to name the officials that should undergo our own American Nuremberg trials.
END_OF_DOCUMENT_TOKEN_TO_BE_REPLACED
Added to the calendar on Wed, May 4, 2016 3:59PM
§Rebecca Gordon: U.S. Officials Should Stand Trial Post 9/11 War Crimes
by Nancy Tubbs, nancy_tubbs@fullcalendar.com
Berkeley Hillside Club
2286 Cedar St
Berkeley, CA 94709

To this day, the people of the United States have never had anything like a full accounting of all that has been done in our names as part of this seemingly endless "war on terror." Nor has there been any credible public reckoning for the officials at the highest levels of government who are responsible for all the deeply troubling actions undertaken by Washington since 9/11. The country has been manipulated into a stance well apart from the legal community of nations. There is a pressing need for the United States, now deeming itself "leader of the free world," to be held accountable for its actions. Instead, the country increasingly violates international laws of war and human rights with evident impunity.

For the sake of all the victims of the "war on terror," for the sake of our national soul, and even more for the future of humanity itself, we need a full accounting of our American war criminals. We need an American Nuremberg.

Rebecca Gordon teaches in the Philosophy department at the University of San Francisco and for the university's Leo T. McCarthy Center for Public Service and the Common Good. Her previous publications include Letters From Nicaragua, Cruel and Usual: How Welfare "Reform" Punishes Poor People , and Mainstreaming Torture.

DAVID TALBOT, founder and former CEO of Salon.com, was senior editor at Mother Jones magazine, and features editor at the San Francisco Examiner.

$12 advance, $15 door.
END_OF_DOCUMENT_TOKEN_TO_BE_REPLACED
Add Your Comments
Support Independent Media
We are 100% volunteer and depend on your participation to sustain our efforts!