Battle of Minsk: the biggest defeat to Hitler and Third Reich 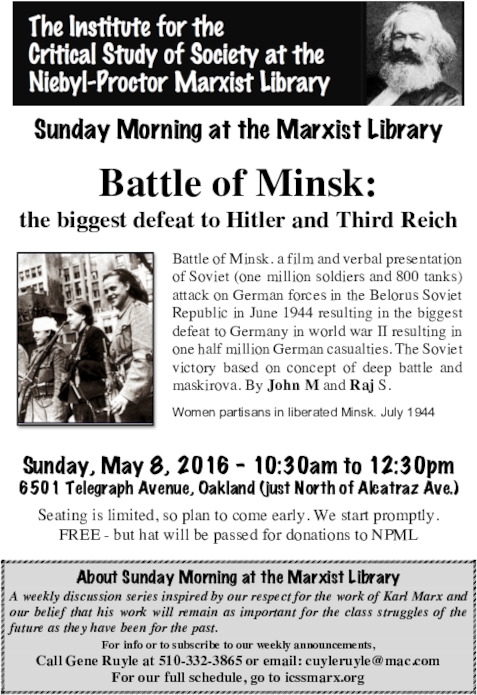 Sunday Morning at the Marxist Library

Battle of Minsk: the biggest defeat to Hitler and Third Reich

Battle of Minsk. a film and verbal presentation of Soviet (one million soldiers and 800 tanks) attack on German forces in the Belorus Soviet Republic in June 1944 resulting in the biggest defeat to Germany in world war II resulting in one half million German casualties. The Soviet victory based on concept of deep battle and maskirova. By John M and Raj S.

For info or to subscribe to our weekly announcements,
Call Gene Ruyle at 510-332-3865 or email: cuyleruyle [at] mac.com
For our full schedule, go to icssmarx.org
END_OF_DOCUMENT_TOKEN_TO_BE_REPLACED
Added to the calendar on Mon, May 2, 2016 11:09AM
Add Your Comments
Support Independent Media
We are 100% volunteer and depend on your participation to sustain our efforts!