Add an Event
Newswire
Calendar
Features
Home
Donate
From the Open-Publishing Calendar
From the Open-Publishing Newswire
Indybay Feature
Publish to Newswire
Add an Event
Related Categories: San Francisco | Labor & Workers
ILWU Local 10 Initiated May Day Rally In San Francisco
by Labor Video Project
Sunday May 1st, 2016 11:30 PM
ILWU Local 10 initiated a May Day rally and march against police terror and for working people. Actor and Activist Danny Glover was one of the speakers. The ILWU members stopped work on May Day and no cargo was worked on May Day. 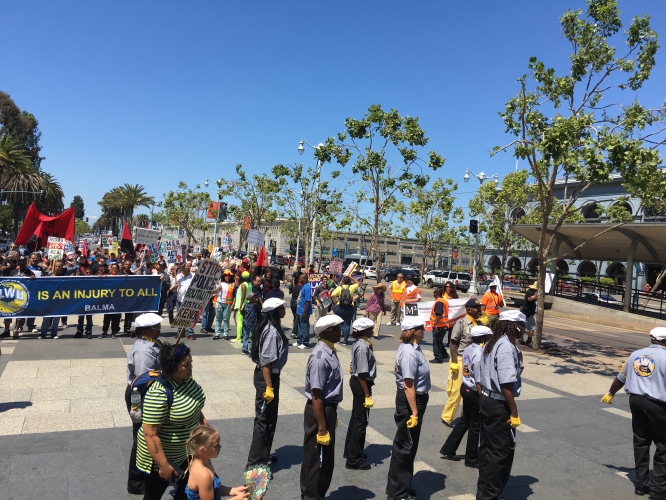 original image (4032x3024)
Trade unionists unionists, workers, musicians, activists and families of members killed by police rallied and marched along the embarcadero to the Harry Bridges Plaza at the Ferry Building. Also there were statements of solidarity from unions around the world.
May Day Message From Working People's Party Of Puerto Rico (Partido del Publo Trabajador-PTT) To ILWU Local 10 Initiated 2016 May Day Rally In San Francisco

Message from Puerto Rico
Dear Brothers and Sisters:It is with great pleasure that I send this message of solidarity on behalf of the Working People’s Party of Puerto Rico (Partido del Pueblo Trabajador-PPT), to all those congregated and marching in solidarity with the International Longshore and Warehouse Union, Local 10 at the ports of the San Francisco bay area. Although we are separated by thousands of miles, land and sea, our struggles are the same. We applaud your courageous efforts in closing the ports of your city, calling attention to the situation of workers in San Francisco and all over the United States. Your call is our call: for $15 an hour minimum wage, an end to racist policing, the expansion of voters rights and quality education for all, as a human right. Since 2010, the PPT has established itself as an electoral party of social movements, dedicated to defending the rights and interests of Puerto Rico’s working class, the decolonisation of our island-nation, and the fight against neoliberal austerity. This year, our battle is two-fold. First, our electoral campaign is dedicated to challenging the two-party system that for nearly 50 years has kept our people chained to economic dependency, under schemes of unsustainable development and corrupt politics. Secondly, we reject the prescriptions that the Republican- controlled Congress has been preparing in order to solve the infamous debt crisis which beleaguers Puerto Rico. The Puerto Rico Oversight Management and Economic Stability Act (PROMESA), currently in draft, proposes that a Washington-appointed governing board (Junta) take control over all the island’s public financial and fiscal affairs in order, to pay for an unsustainable and unjust debt that has not even been audited. It proposes that minimum wage should be reduced to below the federal standard, to $4.25 per hour for people under 25 years of age; deregulation of environmental standards; privatization of public lands and beaches and our Electric Power Authority. With not a single elected official having word on the proposed board, we denounce the plan as anti-democratic and catastrophic for the people of Puerto Rico. Today, in San Juan, we join all of our country’s trade unions, together with social movements, poor communities and environmental organizations, marching in front of Puerto Rico’s Capitol building to protest PROMESA and all austerity policies. We salute also the people of Puerto Rico who are found among your ranks, and all immigrants who were forced to leave their country in search of better job opportunities. We hope that in the labour movement of the United States, their call for social justice is heard. Finally, we appeal to the working people of the United States to join us in demanding that President Barack Obama release our political prisoner Oscar López Rivera, who has served 34 years behind bars without ever being properly accused and tried, and who’s only crime was to support the independence of his country. To this end, we wish you a very happy yet combatant International Workers’ Day with hopes that the future will see the strengthening of ties and solidarity among our labour organisations.
Abrazo solidario, Rafael Bernabe Gubernatorial Candidate for the Working People’s Party, 2016San Juan, Puerto Rico_____________________¡
Rescata la esperanza!¡Únete al Partido del Pueblo Trabajador!"¿El arte de escribir no es reducir? La verba mata sin duda la elocuencia. Hay tanto que decir, que ha de decirse en el menor número de palabras posible. Eso sí, que cada palabra lleve ala y color." -- José Martí
http://www.pueblotrabajador.com

Stop the deadly destruction of job security and the road to war
by strikes in every workplace!
Let’s get together In May Day 2016 all over the world!

The May Day 2008 shutdown of all 29 West Coast by ILWU to protest against wars in Iraq and Afghanistan set brilliantly and vividly a clear objective as to what for labor unions to do.
In the May Day 2015, you boldly shut down Bay Area Ports to protest racist police brutality and killings.
And in the May Day today, once again you are ready to shut down the Ports to protest the massacre at Emanuel AME Church last year and racist policing and to demand $15/hr minimum wage, universal health-care system and due education.

An unprecedented crisis of war is impending now in the Korean Peninsula. US and South Korean troops consisting of more than 300 thousands soldiers gear up for a war, taking advantage of an adventurous and anti-working class nuclear manipulation of North Korea government. On March 29 Japanese Abe administration enforced the comprehensive legislative law of war to admit exercise of the right of collective self-defense and gets heated to step in and hold a leading position in encountering this crisis in Asia.

The time has come for the true value of the slogan “The War At Home & War Abroad”, which you pushed forth during the labor bargaining years of 02 and 03, to be put to the test. This attack is calculated to completely weaken the forces against war invasion by totally dismantling labor legislation (the central attack being an all-out initiation of limited term employment laws and destruction of work hours regulation) through the destruction of union solidarity.

The 8 hour labor law is the gem that has been protected by the unbroken worker's struggles since the Hay Market struggle of 1886 and its destruction is unforgivable. We must never fail to allow the capitalists to lay off workers at their selfish will through limited term employment laws.

Let us fight through the 2016 May Day together with International Solidarity! 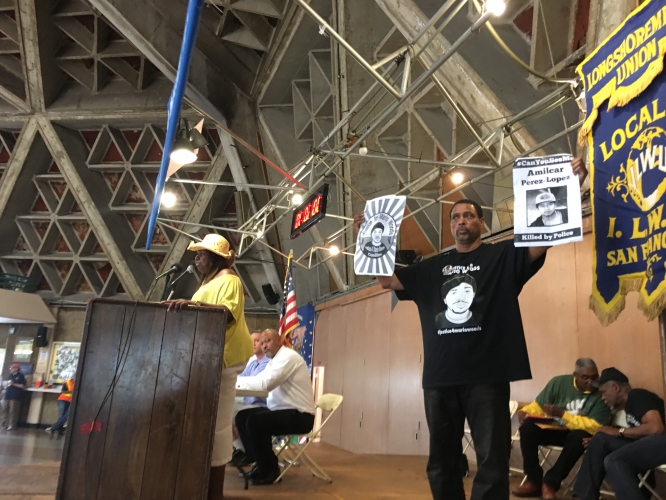 original image (4032x3024)
The Mario Woods Committee spokesperson Phelicia Jones spoke about the murder of Mario Woods, Amilcar Perez Lopez and many others at the ILWU Local 10 May Day rally.
http://www.laborvideo.org
§Cops Follow You Home
by Labor Video Project Sunday May 1st, 2016 11:30 PM 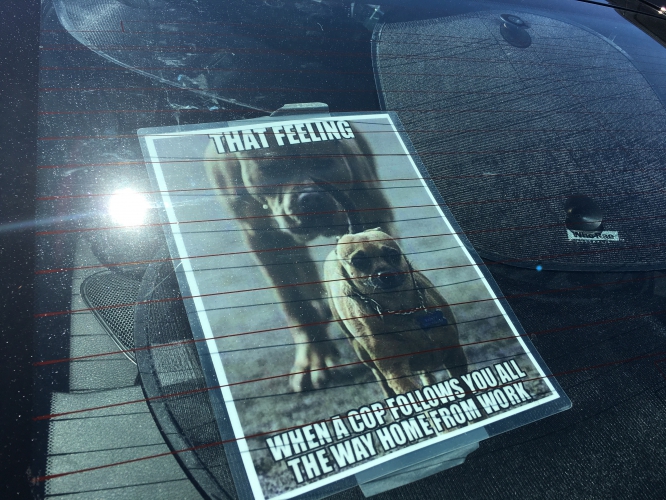 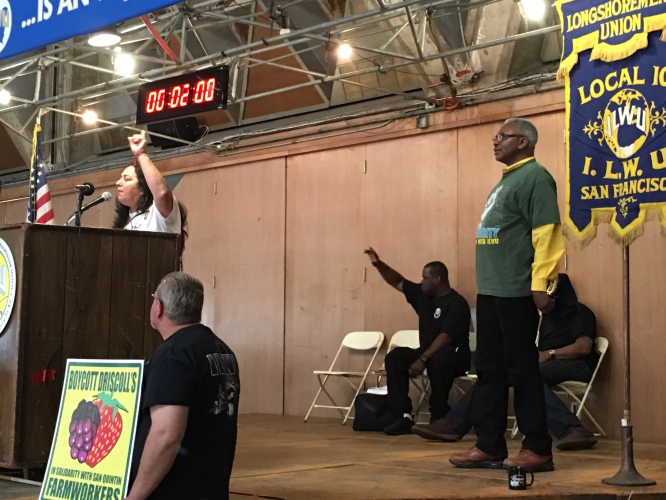 original image (4032x3024)
A report was made on the condition of Mexican San Quintin farm workers and their families and the boycott of Driscoll berries.
http://www.laborvideo.org
§Danny Glover Spoke At Rally
by Labor Video Project Sunday May 1st, 2016 11:30 PM 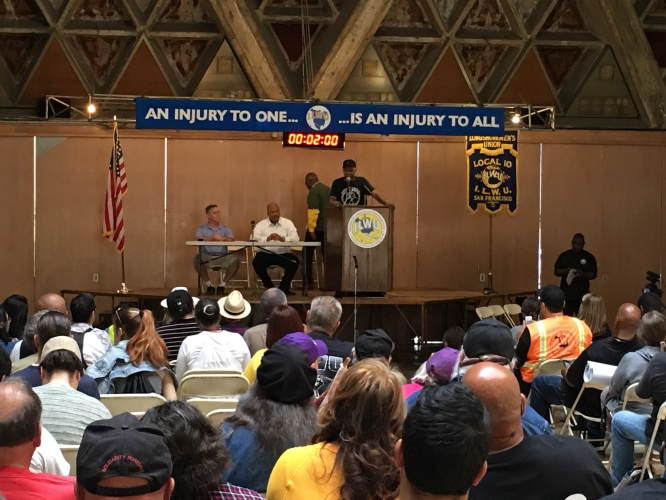 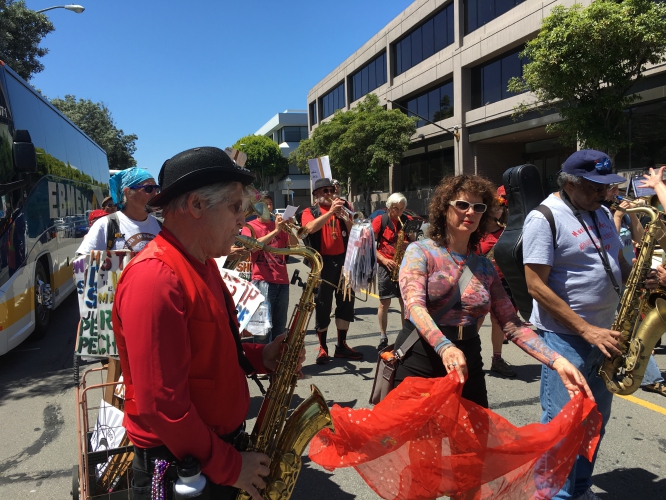 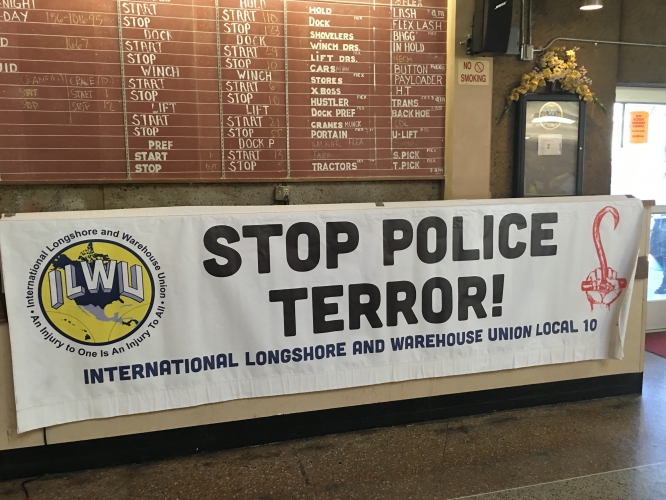 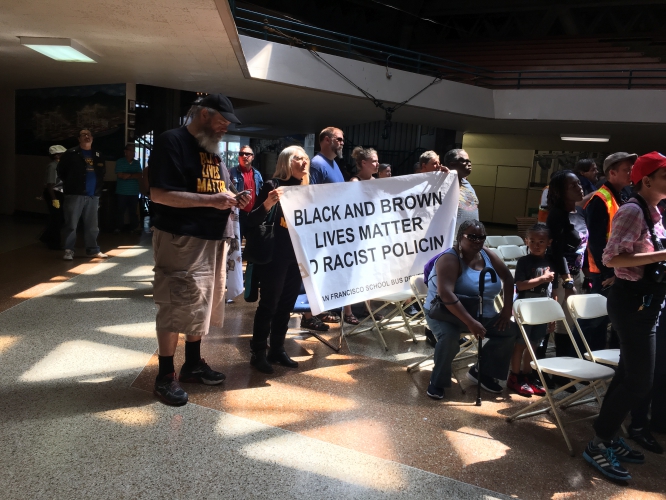 original image (4032x3024)
The San Francisco school bus joined the rally with a banner. Black and Brown lives matter.
http://www.laborvideo.org
Add Your Comments
Support Independent Media
We are 100% volunteer and depend on your participation to sustain our efforts!