Add an Event
Newswire
Calendar
Features
Home
Donate
From the Open-Publishing Calendar
From the Open-Publishing Newswire
Indybay Feature
Publish to Newswire
Add an Event
Related Categories: International | Environment & Forest Defense | Government & Elections
Australian environment ministers agree urgent action needed on climate change
by john Englart (Takver)
Thursday Apr 21st, 2016 2:33 AM
In a late night conference call on Wednesday night 20 April 2016 between Australian Federal Environment Minister Greg Hunt, Queensland State Environment minister Steven Miles and Environment ministers from other Australian states it was agreed that what is currently happening on the Great Barrier Reef with extensive and severe coral bleaching is alarming and is an issue of concern not just to Queenslanders but to all Australians. 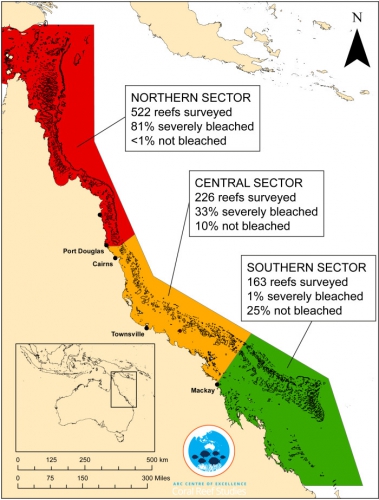 Ministers all agreed that strong and urgent action was needed on climate change.

Greg Hunt participated in the call from Melbourne Airport shortly before boarding a plane to New York to participate in a signing ceremony of the Paris Agreement that was negotiated at the UN climate talks in December 2015. Over 160 nations are likely to be represented in New York, representing a record for countries eager to sign an international accord or treaty.

In a media statement Steven Miles said "Ministers described their concern that the Great Barrier Reef is bleaching before our eyes, that Victoria is facing the extraordinary occurrence of bushfires in April, and in this summer in Tasmania, fires tore through tens of thousands of hectares of ancient world heritage-listed forests,"

“Coral bleaching is caused by climate change. That's what all the scientists tell us including the Great Barrier Reef independent expert panel which provided this advice to me and Minister Hunt in writing only two weeks ago." Dr Miles said.

“I wrote to Mr Hunt urging him to hold a meeting in Cairns so Ministers and officials could witness first-hand the devastating effects of warmer ocean temperatures.

“I want to see national action on climate change and this is a priority for the Palaszczuk Government. Fighting global warming is a crucial step in helping safeguard the Great Barrier Reef, the thousands of jobs it supports, and the billions of dollars it continues to generate," Dr Miles said.

Environment Minister Greg Hunt agreed to conduct weekly talks, before going into caretaker mode for the Federal election, likely to be on July 2.

Queensland Deputy Premier Jackie Trad said the fact that Hunt agreed to this schedule was an acknowledgement of the pressure on the Federal Government to deliver a more coherent and effective national climate change policy.

“Last night was an extremely valuable opportunity for us all to come together to talk, but the time for debate is now well and truly over,’ Ms Trad said. “The reef needs Malcolm Turnbull and the Federal Government to step in and bring Australia’s climate change policy in line with what Mr Turnbull has advocated in the past.

“Australia needs to adopt emissions reductions targets in line with the expert advice from the Climate Change Authority. In addition we need to adopt a mechanism that helps achieves this abatement,’ Queensland Deputy Premier Jackie Trad said.

Both the Federal Liberal National Party Government and Queensland State Labor Government have approved the Adani Carmichael coal mine in the Galilee basin which has been identified as a carbon bomb for the emissions it would cause if the project ever goes ahead. Neither government has reversed it's approval for the mine, a huge threat to climate change and the future health of the Great Barrier Reef.

Conservative politicians like Townsville based Liberal Party MP Ewen Jones think that the mine and a 1.2GW coal power station would be great to develop and argue that governments should massively subsidise the project. They seem to delight in ignoring the current crisis of coral bleaching the Great Barrier Reef and it's bleak future in a world of greater coal consumption and climate change.

In other developments, scientists published a full page ad in the Brisbane Courier Mail with an open letter arguing strongly for the phase-out of coal to save the Great Barrier Reef.

In a full page advertisement in the Brisbane Courier Mail newspaper, 56 climate change and marine science experts articulated that phasing out coal should be a top priority for Australia to protect the Great Barrier Reef.

The scientists called for "the end of the fossil fuel era" because the Great Barrier Reef’s future “depends on how much and how quickly the world, including Australia, can reduce greenhouse gas emissions and limit ocean warming”.

The full open letter is below and was published by the Climate Council, with money for the ad raised from many Australians concerned about climate change and the damage to the reef.

Climate Councillor Professor Lesley Hughes said in a Climate Council media release that the science was clear: the mass bleaching event would not be occurring without the influence of climate change.

“This is not a surprise because we have known for decades that the burning of fossil fuels is driving climate change, and that delicate ecosystems like the reef will be destroyed as a result,” she said. “We are now seeing first hand the damage that climate change causes, and we have a duty of care to speak out.”

Latest reports from aerial and marine surveys show that 93 per cent of the reef has suffered coral bleaching, and much of the damage is severe. Just 7 per cent of reefs were not affected in this global coral bleaching event. (SMH report)

“We’ve never seen anything like this scale of bleaching before. In the northern Great Barrier Reef, it’s like 10 cyclones have come ashore all at once,” says Professor Terry Hughes, convenor of the National Coral Bleaching Taskforce that is documenting and studying the event. "Towards the southern end, most of the reefs have minor to moderate bleaching and should soon recover."

"We have now flown over 911 individual reefs in a helicopter and light plane, to map out the extent and severity of bleaching along the full 2300km length of the Great Barrier Reef. Of all the reefs we surveyed, only 7% (68 reefs) have escaped bleaching entirely. At the other end of the spectrum, between 60 and 100% of corals are severely bleached on 316 reefs, nearly all in the northern half of the Reef." concluded Hughes in an ARC centre of Excellence Coral Reef Studies media release.

World-renowned reef scientist Professor Ove Hoegh-Guldberg said that if the reef was in hospital, it’d be in ICU.

“For scientists like me, who have devoted their lives to improving our collective understanding of the Great Barrier Reef, it’s been distressing to see first-hand the severity and extent of damage from the bleaching event underway. This is one of the most visible icons of Australia – one of the world’s seven natural wonders and a multi-billion dollar economic asset. It is under threat and we must act now to save it.

“If we don’t, we will be explaining to our children and grandchildren that we had the chance to save this precious reef and we failed to take it.” said Hoegh-Guldberg.

The open letter by scientists follows:

Climate Change is Destroying our reefs. We must phase out coal

We, the undersigned, have collectively devoted over 1200 years studying climate change, marine ecosystems and the reef. We know that the burning of fossil fuels is severely damaging our Great Barrier Reef. This is directly threatening a major economic resource. The World Heritage listed Great Barrier Reef earns multiple billions for the economy and provides jobs to tens of thousands of Australians.

As you read this, the Great Barrier Reef is currently experiencing the worst mass coral bleaching event in its history. Whilst the full extent of the damage is still unfolding, the current bleaching is far worse than previously expected, with large portions of the reef severely bleached and likely to die. Warmer ocean temperatures, driven by the burning of coal, oil and gas, are increasing the occurrence of severe coral bleaching events like the one we’re witnessing now. Over the past 30 years the Great Barrier Reef has lost 30-50% of its coral cover from bleaching and other stressors, and at this moment even more of the Reef’s coral is being destroyed. One of the most visible Australian icons is under threat and we must act now to save it.

Since March 2016, the weekly average sea surface temperature over the northern Great Barrier Reef has been around 1-1.5°C above the recent decadal average (2002-2011) for this time of year, with higher anomalies in some localised waters. This has resulted in coral bleaching across the Great Barrier Reef, particularly the most pristine and isolated reefs in the far north. Aerial surveys of more than 500 coral reefs from Cairns to Papua New Guinea reveal that the overwhelming majority of reefs in this section are ranked in the most severe bleaching category.

The science is clear. The current bleaching would not be occurring without the influence of climate change. The increase in carbon dioxide in the atmosphere from the burning of coal, oil and gas is warming the oceans, causing these devastating bleaching events that are threatening the survival of coral reefs worldwide. Australia has weathered El Niño events for centuries but it was only from the early 1980s that the Great Barrier Reef began to experience repeated coral bleaching events, after global warming began in earnest. The burning of fossil fuels is also increasing the amount of carbon dioxide in the oceans, increasing ocean acidity and slowing the ability of reefs to recover from impacts such as bleaching, cyclones and predatory starfish.

Australia is the custodian of one of the seven wonders of the natural world. Not only is the reef incredibly beautiful, it’s also a billion dollar economic asset. The value-added economic contribution of the Great Barrier Reef World Heritage Area to the Australian economy in 2011-12 was $5.7 billion and it supported 69,000 jobs.

The future of the Great Barrier Reef, and reefs around the world, depends on how much and how quickly we can reduce greenhouse gas emissions and limit ocean warming. Small-scale actions such as culling predatory Crown-of-Thorns starfish on a handful of reefs and improving water quality in the southern reef will not prevent ongoing damage from climate change. If the world, including Australia, continues to burn coal, oil and gas and warm the climate at current rates, corals worldwide will be subject to increasingly frequent and severe bleaching events. This will overwhelm the ability of corals to recover and reefs like the Great Barrier Reef will disappear by mid-century if not sooner. This will directly threaten the livelihoods of over 500 million people worldwide.

As scientists we have a duty of care. We understand that one of the most biologically diverse and economically valuable ecosystems on Earth is being destroyed, and we know the steps we have to take to prevent even more damage. We have a responsibility to speak out about the facts, especially when the stakes are so high. At the Paris conference on climate change in December 2015 the world came together to agree that strong eorts must be made towards limiting global warming to well below 2°C with a target of 1.5°C in the long-term. Now is the critical time to make this pledge a reality.

This must be the number one priority if we are to protect what remains of the Great Barrier Reef and other reefs around the world.