by john Englart (Takver)
The Oil and Gas companies are holding a conference on deepwater oil and gas and how to be more efficient to further exploit deep sea fossil fuels. About 500 climate change activists have blockaded and disrupted the first day of the conference. 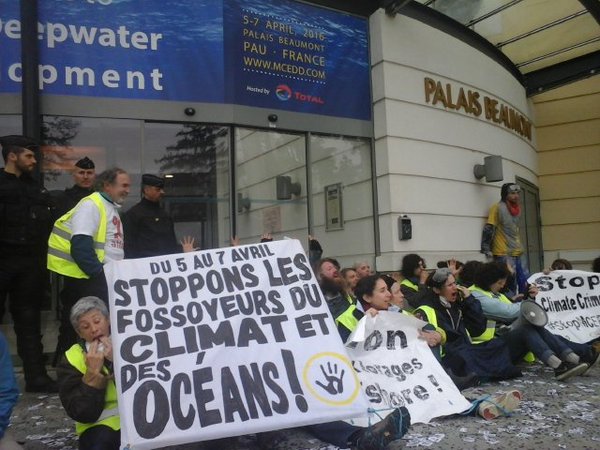 The largest oil and gas companies around the world have decided to meet in Pau from April 5 to 7, less than 4 months after the COP21. There goal is to increase the exploration and exploitation of hydrocarbons in the sea. "Forever further, ever deeper and in conditions more extreme is a crime against the Oceans", denounced climate protection organizations. The coalistion of community, environmental and climate organisations announced they would block the holding of this strategic summit, using non-violent actions and mobilizations. The protests were preceded by a climate action camp, Camp Siren.

Activists say that choosing the climate is blocking the exploitation of new hydrocarbon deposits and protecting the ocean. They ask that the French government: suspend any type of financing of the fossil fuel sector - neither grants nor investment for coal, gas and oil; and to cancel ongoing hydrocarbon deposit boreholes and cancel all exploration and exploitation rights by fossil fuel companies. The money diverted from fossil fuels must go to the transition to fair and sustainable societies. It must also fund the conversion industries and transition of those presently working in fossil fuels.

Total’s executive Arnaud Breuillac articulated that due to the fall in oil prices since 2014 oil company profits have suffered and forcing companies to cut costs and find savings, but that oil and gas was still needed despite the growth in renewables.

“To ensure the right level of profitability, oil companies and services companies must work together to find innovative ways to bring cost down,” Breuillac told other oil industry executives and experts according to Reuters at the conference.

“We need to increase our collaboration, to find better ways to share risks and to collectively find a new balance,” Breuillac said. They are hoping to manage and ride the downturn, even though the climate imperative is that oil and gas development needs to stop.

One the first day protesters successfully disrupted and blockaded the conference venue, both from the inside and outside. French Journalist Patrick Piro has put together this storify (fr).

After 9 hours people are still blockading the entrance to the Palais Beaumont where the conference is being held. Pau is the headquarters of Total's research and development division.

"Each time that the gravediggers of the #climate will hold a Summit of this kind, we will be there!" said one of the speakers, C Marchand.

Another speaker said, "This morning we send a signal strong: the peoples of the world will enforce the Paris agreement!"

"Our actions of civil disobedience are legitimate. We Continue to draw the red lines of the climate!" said a third activist.

Yes, teargas was used indiscriminately against non-violent protesters. Antoine Simon from FoE Europe commented, "Medics, first target of police tear-gas... This is how non-violent actions are treated these days."

Climate activists faced off the riot police singing "without hatred, without weapons, without violence". Their reply to batons is non-violence. "Police, go slowly, we're here for your children" they chanted.

Under the police gaze activists sing "and one and two and three degrees, it is a crime against humanity!"

Two activists infiltrated the conference and locked themselves to plenary chairs, before being cut free and excorted out by a large number of riot police. The intervention was actually applauded by part of the audience, and quite a few filmed or photographed the interaction.