Add an Event
Newswire
Calendar
Features
Home
Donate
From the Open-Publishing Calendar
From the Open-Publishing Newswire
Indybay Feature
Publish to Newswire
Add an Event
Related Categories: U.S. | Environment & Forest Defense
You Can't wash us away. Protest disrupts BOEM Gulf of Mexico oil lease auction
by john Englart (Takver)
Monday Mar 28th, 2016 12:18 AM
Hundreds of climate change protesters disrupted a US Bureau of Ocean Energy Management (BOEM) auction of offshore oil leases in the Gulf of Mexico on Wednesday 23 March, 2016. What was once a supportive community for the oil industry is now demanding they stop new oil projects and invest in cleaning up the coastal degradation and damage they have caused and continue to inflict on coastal communities. 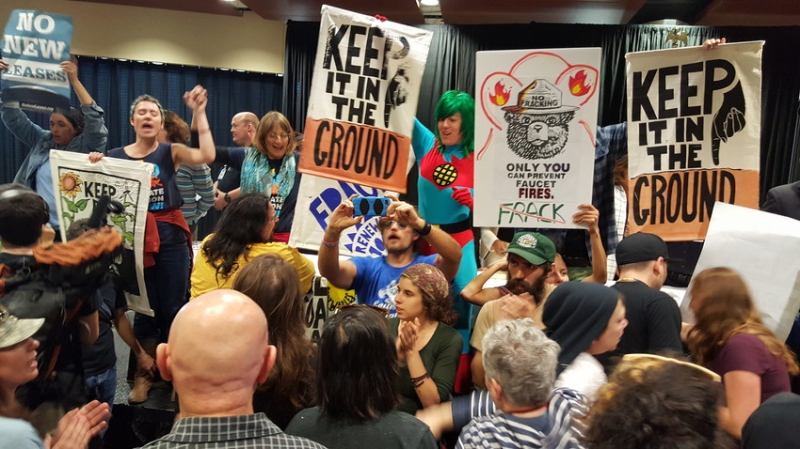 It was an historic event of Gulf Residents and environmentalists rallying at the New Orleans Superdome in an historic ‘Keep It in the Ground’ Action.

Protesters converged in the early morning hours at Duncan plaza a few blocks from the New Orleans Superdome where the BOEM auction was to take place. Artists had prepared numerous banners and giant puppets for the event.

The day started with members of Houma and Ponca nation welcoming the crowd and offering a prayer for sacred land & water.

Then the march through the streets holding the banners, signs and puppets. Chants included 'Our water! our climate! The people won't be silent!', 'our climate is not for sale!', and 'Stop the leases, stop the greed, give the people what they need!'.

The protesters were calling for an end to drilling in the Gulf of Mexico and for the oil industry to immediately create a thousand jobs to clean up and repair aging oil infrastructure, including rigs, platforms, pipelines and refineries that dot the coastal wetlands environment that have been adding to coastal degradation. They want a just transition.

Local environment organisations were prominent including 350 Louisiana, Louisiana Bucket Brigade, Bridge the Gulf and Vanishing Earth, but there were also contingents from groups in other southern states. National groups Friends of the Earth, Greenpeace, Sierra Club, Oil Change International, Indigena, Bold Nebraska, Keeper of the Mountains Foundation, the Center for Biological Diversity, Rethink Energy, Tar Sands Blockade and Rainforest Action Network were also in the crowd.

Earlier in March President Obama announced Atlantic oil leases would not be made available (Bloomberg), while Interior Department, Bureau of Ocean Energy Management (BOEM) auctions would proceed for leases in the Gulf of Mexico and in the Arctic.

At the New Orleans superdome a large portion of the crowd proceeded inside to the BOEM auction. The protestors swamped the oil executives attending and bidding for new oil leases. Chants drowned out the official announcements. 'Shut it down', 'Tell me what democracy looks like, this is what democracy looks like', and 'We won't be washed away.' echoed in the auditorium.

Police were called, but their interventions were minimal. As Jane Fleming commented in a tweet, "Police in position. Reality is bunch of moms, young people, pastors, Tribal folks are not the criminals."

At one stage police were called to remove Idle No More Gulf Coast activist Cherri Foytlin from the stage. She went limp, and the police desisted.

Desmogblog reports on the incident:

“They could have arrested me,” Foytlin told DeSmog. “But there were too many of us that they would also have to arrest.”

A representative from BOEM asked Foytlin what the group thought they were going to accomplish since their actions were not going to stop the sale. Foytlin explained she was protecting the planet for the sake of her children.

She asked him to “go back to the President and tell him that this is just the beginning. Our numbers are swelling.”

“If this president really wants to be the guy he said he was going to be after Paris, he needs to be proactive and stop the sale of federal land for drilling right now,” Foytlin told DeSmog. (Watch an interview with Foytlin on Youtube)

Cherri Foytlin told WTUL News (audio) "If drilled, this would be the eigth largest source of carbon pollution in the world. We went in there and told them 'No'. It is time for a just transition into Green energy. We have 27,000 aging and abandoned wells in the Gulf of Mexico and it is time to put our oil workers back to work cleaning up the mess that by law these companies need to clean up."

Foytlin told the BOEM executives that people will hold Obama and future presidents to the Paris Agreement, and the need to keep 80 per cent of Fossil fuels in the ground, "Because that is what we need to have a viable planet."

Oil company executives during the auction and the disruptive protest displayed a mix of fear and surprise, according to Foytlin.

“The oil industry has drilled and polluted and destroyed the Gulf Coast for the last 100 years. Those of us who live here have let them get away with it. Today's action is historic precisely because of the past century of submission. We are telling Big Oil to take their rigs and go home. And we are telling our elected officials to get with it, to lead the transition from dirty energy to one that relies on wind and solar. Clean, safe jobs are the jobs we want; this is the future we want. If we don't grab it now, we risk being left behind in an oily puddle,” said Anne Rolfes, founding director of Louisiana Bucket Brigade.

BOEM spokesman John Filostrat told Vice News that the lease sale "was successfully conducted and concluded" despite the protest. The auction reputedly netted $156 million for 128 tracts, which covered just under 700,000 acres of the seafloor off Louisiana, Mississippi and Alabama, BOEM reported.

Desmog blog identified that "26 offshore energy companies submitted 148 bids on 128 blocks for Central Sale 241. No bids were submitted for Eastern Sale 226, according to BOEM’s press release. It was the fewest bids submitted at in auction in the last 20 years."

The photos and videos clearly show the auction was effectively disrupted and closed down. See my storify article: You can't wash us away: Protest disrupts BOEM Gulf of Mexico oil lease auction in New Orleans

Cherri Foytlin commented in the auditorium during the middle of the protest, "It is a most amazing day to see all these people standing together with self-determination to say it is time for a new day in the Gulf of Mexico. It's over. The fossil fuel industry, you are on the way out."

Meanwhile, across the Atlantic in France a broad coalition of climate groups and activists are preparing to stop a Deep Sea oil and gas Industry conference in the city of Pau organised by French oil multinational Total for April 5-7. The mobilisation has been endorsed by several community, environment and climate groups including 350 France, Friends of the Earth France, and the Surfrider Foundation.

On Easter Friday Coal trains to the Port of Newcastle were delayed for 3 hours by activists in Australia. Newcastle is the largest coal export port in the world. This follows ongoing blockade action against the Whitehaven Maules Creek new coal mine in Western New South Wales, and an ongoing campaign opposing development of the Shenhua coal mine on the fertile Liverpool plains.

Activists are also gearing up for a global wave of resistance to Breakfree from Fossil Fuels from May 4th to 15th to keep coal, oil and gas in the ground and accelerate the just transition to 100% renewable energy.

https://storify.com/takvera/disrupted-new-...
Add Your Comments
Support Independent Media
We are 100% volunteer and depend on your participation to sustain our efforts!