Add an Event
Newswire
Calendar
Features
Home
Donate
From the Open-Publishing Calendar
From the Open-Publishing Newswire
Indybay Feature
Publish to Newswire
Add an Event
Related Categories: California | Labor & Workers
Dolores Huerta And UFWA Support Mexican Slave Guest Worker Legislation "Guest Workers"?
by repost
Friday Mar 25th, 2016 8:59 AM
UFWA founder Dolores Huerta is now lying about Sanders record and continues to support the S-744 slave labor bill that would set up a bracero program in the US and also further the militarization of the border. The UFWA also made a deal with the Mexican and US government to set up labor brokers offices in Mexico to "recruit" Mexican workers to become slave labor "guest workers" in the US 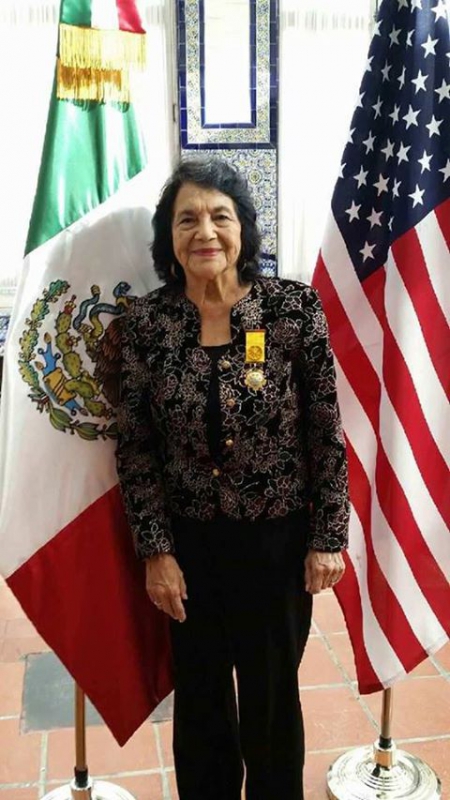 After gathering hundreds of signatures and following a lively floor vote, Emilio Huerta succeeded in blocking Fowler City Councilman Daniel Parra from getting the party endorsement as he challenges Rep. David Valadao (R-Hanford) in the Central Valley race. Valadao is considered vulnerable given it is a presidential year with higher voter turnout.

The effort was a family affair: Dolores, Emilio and his daughter Ana Lucia worked the California Democratic Party convention all weekend to make it happen.

Thanks to Huerta's actions, neither Democrat will have the party's official support or the funding that comes with it.

After Parra won the endorsement vote of a small, local caucus Saturday night, Emilio and Ana hit the convention halls to gather the 300 signatures needed to challenge it on the convention floor Sunday.

A trio of delegates from Lancaster were among the first to sign.

"I support him, he is Dolores Huerta's son," said delegate Camille Dunn. "Let the people hear him."

At around 11 p.m. the group filed enough signatures. A tired Dolores and Emilio came into the press room looking for coffee.

"An organizer eats when he can, sleeps when can," he said between sips.

In the morning Ana Lucia and Andres Chavez, the 22-year-old grandson of United Farm Workers founder Cesar Chavez, worked the halls explaining the particulars of the parliamentary voting to delegates.

Then the big guns came out.

First up to speak in favor of vacating the endorsement was Rep. Zoe Lofgren, chair of California's Democratic Congressional delegation.

She admitted the Democratic Congressional Campaign Committee wasn't able to recruit a candidate in the race early on, one reason Huerta had a late start. She said her heart did a "pitter patter" when Huerta entered in early January. Next up was Rep. Mark Takano (D-Riverside).

Huerta was successful — sort of. While he took the endorsement away from Parra, but he failed to win a second vote that would have given the party's backing. That means the party is neutral in the race, and won't offer financial support.

"I won this thing twice," Parra said the night before. "Now, people outside my district get to decide it."

For Parra's supporters the whole process left a bitter taste. After all, they said, Parra had earlier in February won a pre-endorsement vote with backing from more than 80% of local delegates. And he claimed just under two thirds of the vote Saturday night.

After the vote Parra left the hall, while Huerta walked the halls shaking hands.

Huerta said the real test comes with the June 7 primary when voters take to the polls. He acknowledged his name helped him block Parra.

"It opens the door but it's up to me to bring substance to the table," he said.


et me begin by saying that I respect the lifetime accomplishments of Dolores Huerta. She is an icon in the labor movement, Cesar Chavez’s partner in the farmworker movement. I would not have objected to her translating at the caucus being held at Harrah’s Casino in Las Vegas.


She is mistaken, however, when she claims that supporters of Bernie Sanders shouted “English only.” One person in that room uttered the words “English only,” and it was the precinct chair, who said: “We are going to go with English only, I’m sorry.”

The room did get loud, but there was no objection to there being an interpreter; the objection was to having a Clinton surrogate on the stage. In the video above, you can hear “No” and “Neutral” being shouted. Nobody was chanting “English only.”

Most of her statement is accurate, but the most serious allegation she made is not true. For the record, I shot the video and was centrally located in the room.


Scott Galindez attended Syracuse University, where he first became politically active. The writings of El Salvador's slain archbishop Oscar Romero and the on-campus South Africa divestment movement converted him from a Reagan supporter to an activist for Peace and Justice. Over the years he has been influenced by the likes of Philip Berrigan, William Thomas, Mitch Snyder, Don White, Lisa Fithian, and Paul Wellstone. Scott met Marc Ash while organizing counterinaugural events after George W. Bush's first stolen election. Scott will be spending a year covering the presidential election from Iowa.

Dear brothers and sisters many of you for the last several months have been asking me whether I was invited or decided to attend the "UFW" 50th year commemoration of the Delano 1965 Grape Strike. Three days prior the event I received an invitation from, "Arturo Rodriguez." President of the "UFW" Union in so doing after consulting with my Family having sent our response have decided to share and to release publicly the letter that was sent to brother Arturo Rodriguez."Al Rojas
September 27, 2015
Arturo Rodriguez
President
United Farm Workers
Brother Arturo,
Unfortunately, me and my family will not be able to attend; however, it is my request that you read this letter at the 50th Anniversary of the Grape Strike and Boycott event.
No Time To Celebrate, Agricultural Workers In California and Mexico Are Still Unorganized!
The 50th anniversary of the Grape Strike and Boycott is important to address, but the reality is that the vast majority of farmworkers are still unorganized, more so today than before -- and they continue to face tremendous exploitation and discrimination. Today there is an anti-labor offensive not only against farmworkers but against all workers -- from postal workers who face privatization, to teachers who face charters and union-busting along with more segregation in the schools.
A critical lesson is that farmworkers need a democratic union in which the rank and file can elect their representatives, and all union officials and officers must come from the rank and file who are paid a similar wage. We need locals where the rank and file control their union and the working members are the elected representatives, locally and nationally. The UFW needs to end its reliance on the Democratic Party and on officials like Jerry Brown, who has been supported by labor yet then help the “farm owners” prevent unionization. The politicians are putting forward people like Driscoll’s chairman, Miles Reiter, who was appointed to the California State Board of Food and Agriculture. Both Republicans and Democrats take money from the growers and when push comes to shove they end up siding with the companies. We need to get Miles Reiter off this board for the way he has treated the workers in Mexico.
The UFW also needs to end its support of an indentured servitude "guest worker" outsourcing program. Unfortunately both the AFL-CIO and the SEIU, and other unions, have supported the so-called “Comprehensive Immigration Reform” legislation (S-744), approved by the U.S. Senate, which included a “guest worker” program that sets up labor brokers in Mexico to recruit workers to be "union workers” as “replacement workers” in the United States. How would this help U.S. agricultural workers when, for example, the striking Sakuma workers, Familias Unidas Por La Justicia (FUJ) in the state of Washington, are faced with replacement "guest workers”? Already the FUJ has experienced employers’ use of replacing FUJ workers, using replacement “guest workers.”
We need to revitalize our solidarity with our brothers and sisters in Mexico, not with a "guest worker" program but by supporting their struggle for independent unions and for direct action, and by building solidarity with them. The key struggle that we need to actively support is the strike by the Alliance of National State and Municipal Organizations for Social Justice of over 50,000 workers. The U.S. government, through the immigration laws and support for union-busters like the Driscoll’s corporation, is helping to maintain virtual slave labor on our borders with wages at $7.00 a day. Our struggle is – and must be -- with our brothers and sisters and their families in San Quintin, Mexico, and with the Sakuma workers, Familias Unidas Por La Justicia (FUJ), in the state of Washington. They need our support through a boycott and also direct solidarity rallies and action between U.S. and Mexican workers. We face the same bosses and same corporate-controlled anti-labor governments.
It is not enough to "commemorate" the anniversary with talk. We need to support a mass organizing effort in the Central Valley and throughout California -- for the future of our families and children. We need to organize in our communities for the boycott of all Driscoll’s products, and to work for the victory for human and labor rights for our brothers and sisters in Mexico and against the use of reactionary U.S./Mexican laws that pit worker against worker and that prevent unionization on both sides of the border, which NAFTA has encouraged.
We have the power, and we need to build solidarity and education to win this struggle. The UFW must actively support the Driscoll’s international boycott campaign.
I would like to now add at a note on a more personal level: My family takes great pride and honor to have been part of the UFW Grape Strike and Boycott history. Our family, like many families, experienced great suffering during the movement, and the UFW has never shown any good faith or compassion toward my family to this very day. Me and Elena, and our children live with a great pain in our hearts that our family was so mistreated by the very union that we helped to found: The United Farmworkers Independent Union, founded in 1965.
Fraternally,
Al ROJAS
Co-Founder of the United Farm Workers Union
Organizer - Grape Boycott - Pittsburgh, Pennsylvania
Organizer - Tomato Strike - Woodland/Davis/Sacramento, California
1964-1979

http://www.huffingtonpost.com/…/an-open-...
Add Your Comments
Support Independent Media
We are 100% volunteer and depend on your participation to sustain our efforts!