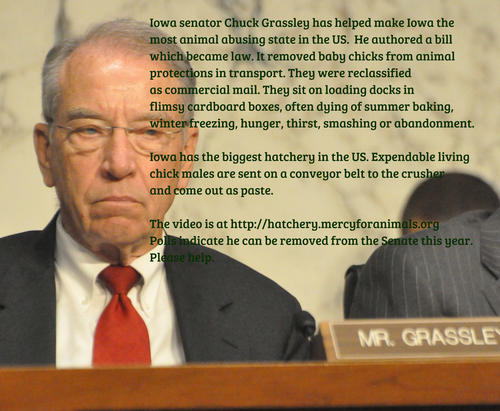 Please vote out of national, state and local offices, from the courts, every animal abuser. and warmonger, from Barbara Boxer to John Kasich


The more united those who work for the rights and protction
of animals, the sooner they will be protected
from being bombed and burned to death in war,
from factory farms torture, trophy hunting,
animal research agony, and ultimately, from
human mouths.

The following are only a tiny percentage of the animal abusers in our courts, legislatures, executive offices, and federal agencies.

2.Senator Rob Portman worked when a Bush operative to bring
hunting into our national parks, to endanger children, adults
and animals.

3. Senator Johnny Izakson, Republican Georgia, introduced
the unconstitutional Animal Enterprise Terrorism Act legislation
which gave immunity to those who butcher and harm trillions of
animals while the act criminalized nonviolent and peaceful
videotaping of the abusers' operations.

4. Congressman Paul Ryan, Wisconsin proponent of the
Wisconsin dairymen, deer hunter, catfish strangler,
is a coarchitect of wars which have killed millions of
people and trillions of animals.

5. Congressman Don Young of Alaska introduced a bill
to allow carcasses of illegally murdered polar bears to be brought
into the US

6. Senator Lisa Murkowski has been a pawn of Alaska hunters.

7. Every senator and congressman, every judge who has voted
monies for war or ratified war torture should be voted out
or impeached.

8. Governor Kasich, Ohio Republican, has taken money from libraries, schools, firemen etc while using tax dollars to teach children to hunt animals with bows and arrows. He has neglected the protection of captive animals in dairies, laboratories, factory farms. http://ohdairy.mercyforanimals.org