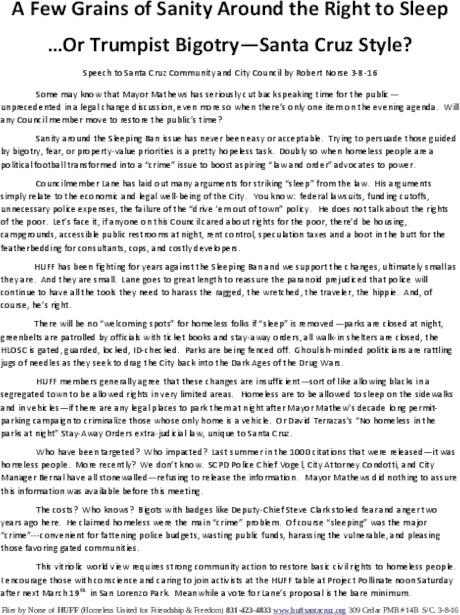 Download PDF (268.6KB)
THE SITUATION
I made some earlier comments anticipating the Council voter at https://www.indybay.org/newsitems/2016/03/07/18783720.php ("Sleeping Ban at City Council; Freedom Sleepers in 35th SleepOut ").
I analyzed the substance of the Lane proposal and the process by which it was created on a radio show archived at http://www.huffsantacruz.org/Lostshows.html (the March 6, 2016 show). There is also follow analysis in the early part of the March 10 show at http://radiolibre.org/brb/brb160310.mp3 .

The entire video of the Council meeting can be found on the City's website at http://www.cityofsantacruz.com/city-government/city-council/council-meetings/city-council-meeting-audio-files if you are a glutton for punishment.

I've reviewed in detail (probably too much detail) the Council "discussion" prior to its crushing the Lane proposal 5-2 at http://radiolibre.org/brb/brb160313.mp3 .

On the positive side, Lane finally adopted the position that homeless people generally, most homeless activists, religious groups, student organizations, numerous social service agencies, and even timid liberals have held for years: sleeping is a need and a right.

Turning sleeping into a crime permanently hurts the poor. It is fiscally stupid. It does not serve the community's interests. It embitters/divides us. It also deepens the police state, maintaining (and this is nothing new) a pariah underclass, denied the rights everyone else takes for granted. Nice incentive to keep working shit jobs and paying rent, of course. If you're not a part of the gentry, move out or get busted for sleeping.


FIGHTING BACK?
Will the community do nothing while unhoused people continue to be treated like dirt to be hosed away? So far--yes. But there are rumblings of mutiny.,

Freedom rider and more recently Freedom Sleeper Phil Posner has called for a real response to the Council's craziness.

Activist Elisse C. recently sent out an e-mail asking for folks to gather next Tuesday before Freedom SleepOut #36 on 3-15 at 3 PM.

In other cities like Salinas on March 22nd, middle-class activists and unhoused folks are fighting back: http://www.thecalifornian.com/story/news/my-safety/2016/03/11/salinas-homeless-urged-stand-their-ground/81679316/ .

Silence gives consent. But do the good liberals and the nervous progressives of Santa Cruz want to take the risks of actively opposing Trumpism in Santa Cruz (in Democratic Party garb, of course).
§Proposed Additions to Lane Changes
by Robert Norse Sunday Mar 13th, 2016 12:54 PM 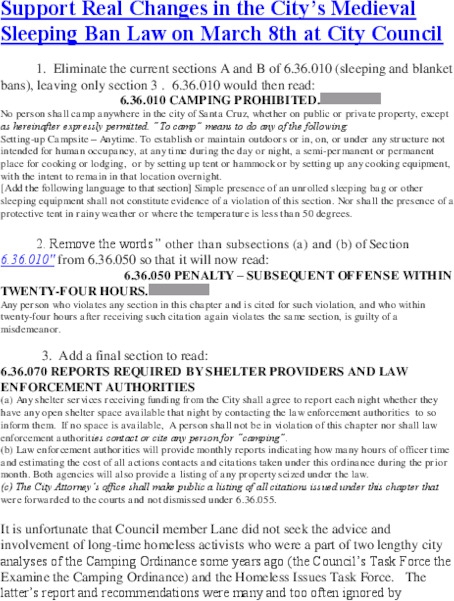 Download PDF (411.4KB)
These changes were circulated a week before the meeting, even though Lane excluded me (and other activists) from his meetings. Lane included the addition of "sleeping bags" to diluted language; Posner added the suggestion that sleeping equipment shall not be used as evidence of camping crime. Needless to say, neither passed. Important to clarify, though, what's needed. Far more, of course.
§Staff Stonewalling at City Council
by Robert Norse Sunday Mar 13th, 2016 12:54 PM 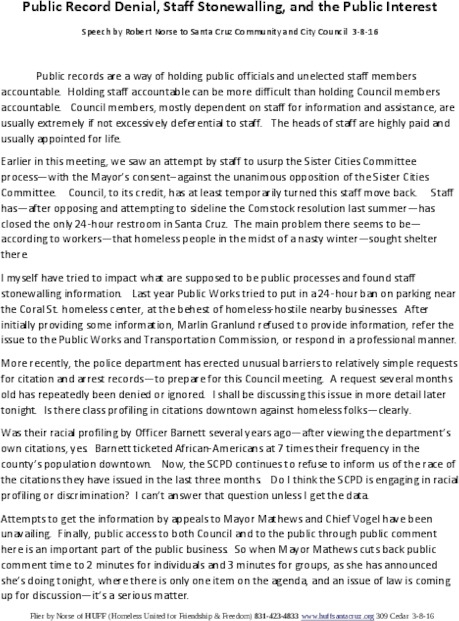 Download PDF (259.8KB)
In spite of multiple requests, the SCPD refused to provide access to the citations they gave under the camping ordinance (specifically holding back race and address). The request was made months ago. Councilmember Posner also declined to make a written request for this information though he made the request verbally to the police chief, I was told. So there's no documentation that the staff is directly frustrating a relevant and timely request for data that bore directly on the
Council debate.
§Wake Up the Community Conscience
by Robert Norse Sunday Mar 13th, 2016 12:54 PM 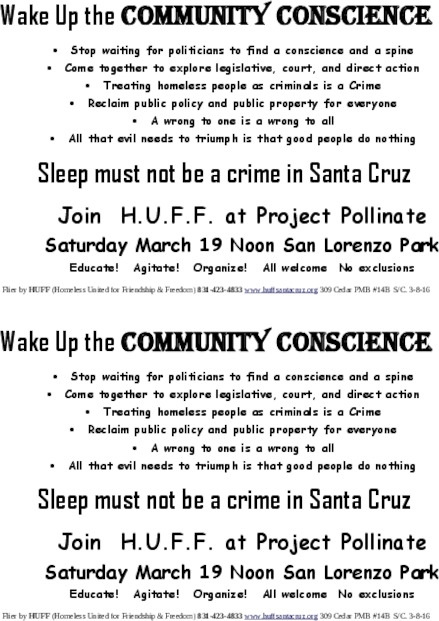 Download PDF (127.8KB)
An early attempt to recognize, even prior to the Council meeting, that Lane's proposal was likely to fail. The real issue then is a sustained response, building on the abusive City Council response and, hopefully, public outrage from those watching.
§No Rest in the Right-to-Rest Struggle
by Robert Norse Sunday Mar 13th, 2016 12:54 PM 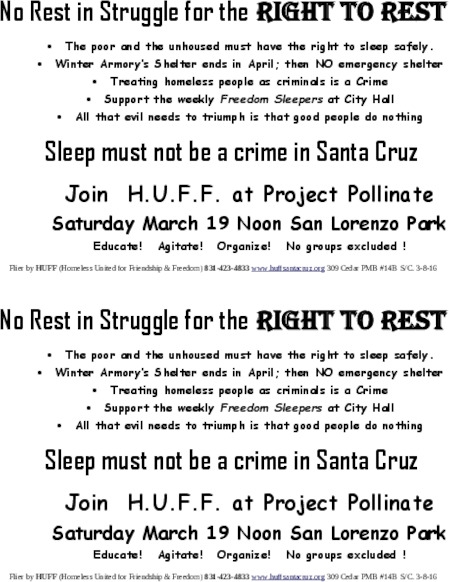 Download PDF (153.6KB)
A second attempt, distributed at the Council meeting, in the hopes of encouraging people to reassemble to engage in stronger action.
Add Your Comments
LATEST COMMENTS ABOUT THIS ARTICLE
Listed below are the latest comments about this post.
These comments are submitted anonymously by website visitors.