Cannabis is scheduled in Schedules I and IV of the Single Convention on Narcotic Drugs as amended by the 1972 Protocol (the “Single Convention”) which does not recognize the medical benefits. This scheduling status of cannabis was created based on a report created by the Health Committee of the League of Nations in 1935. 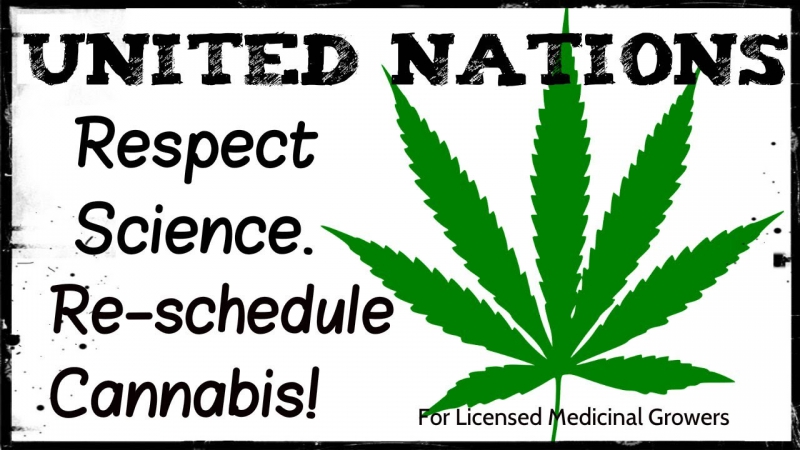 original image (1280x720)
As preparations begin for the United Nations General Assembly Special Session on drug policy (UNGASS 2016) we at Americans For Safe Access and the International Medical Cannabis Patients Coalition are calling on medical cannabis patients around the world to contact their UN Ambassador and encourage them to reconsider international drug policy and the outdated 1961 Single Convention on Narcotic Drugs. The UN must take action to address the clear disparity between their policy and the medical, scientific and legal realities. We've developed an example letter for folks to work from and made it simple to contact our UN Ambassodor via email. So please lend your name to support access for medical cannabis patients not only in the US but across the world.

Click here to Send the Pre-written Email Below and Add your Name to Request Cannabis be Rescheduled in the International Treaties
http://org.salsalabs.com/o/182/p/dia/action3/common/public/?action_KEY=19100

I am writing to you to discuss the United States’s role in the preparation and participation in the upcoming United Nations General Assembly Special Session (UNGASS) on drugs in New York City April 19-21, 2016. This meeting will include, among other topics, a review of the Single Convention on Narcotic Drugs of 1961, the Convention on Psychotropic Substances of 1971, and the United Nations Convention against Illicit Traffic in Narcotic Drugs and Psychotropic Substances of 1988. UNGASS 2016 presents an opportunity to amend and/or update international policies as they relate to cannabis. Member states are uniquely positioned to shape these policies by participating in this process.

Cannabis is scheduled in Schedules I and IV of the Single Convention on Narcotic Drugs as amended by the 1972 Protocol (the “Single Convention”) which does not recognize the medical benefits. This scheduling status of cannabis was created based on a report created by the Health Committee of the League of Nations in 1935. Despite the fact that Canada, Israel, Netherlands, Czech Republic, Croatia, Mexico, Chile, Uruguay, Romania, Germany, Jamaica, Australia, Italy, Columbia, Switzerland and over two-thirds of the population of the United States and its territories live in regions with medical cannabis laws and unfilled requests from the Commission on Narcotic Drugs, in its Resolution 52/5 in 2009, and from the International Narcotics Control Board in its annual report, in 2013; the WHO has not conducted an updated critical review.

In order for cannabis to be rescheduled in the international treaties, the UN Commission on Narcotic Drugs (CND) must make a recommendation to the UN General Assembly. Their recommendation is dependent on a "critical review" from the World Health Organization's (WHO) ECDD committee. This report did not materialize at the November 2015 meeting of the ECDD committee.

It is my hope that America’s role in the process will include demanding that cannabis rescheduling be an agenda item for the UN Commission on Narcotic Drugs (CND)’s UNGASS preparation meetings March 14th to 22nd, 2016 and a pathway forward included as part of the outcomes of UNGASS 2016 meetings.

I am a member of an international coalition of medical cannabis patient organizations representing 34 counties, the International Medical Cannabis Patients Coalition (IMCPC). We have been engaged in UNGASS preparation meetings (see links below) and would be grateful to have the opportunity to brief this office on this this matter and offer the assistance of our international coalition to expand such efforts.

Thank you for your time in considering these matters.

Testimony from WHO ECDD November 2015 Meetings:

The WHO cannabis background document: http://bit.ly/1TV0nID [Talks about last scientific review being from 1935]
http://www.safeaccessnow.org/ask_the_unite...
Add Your Comments
Support Independent Media
We are 100% volunteer and depend on your participation to sustain our efforts!