Add an Event
Newswire
Calendar
Features
Home
Donate
From the Open-Publishing Calendar
From the Open-Publishing Newswire
Indybay Feature
Publish to Newswire
Add an Event
Related Categories: International | Environment & Forest Defense
France: 60,000 people protest against #NDDL new airport as climate hypocrisy
by john Englart (Takver)
Sunday Feb 28th, 2016 12:21 AM
A mass mobilisation brought tens of thousands of Nantais and people from across France together on two roads in Bretagne, the 4 lane Nantes-Vannes and Nantes-Rennes, to oppose the construction of the Notre-Dame-Des-Landes (NDDL) new airport project by construction company Vinci 30 km north of Nantes. 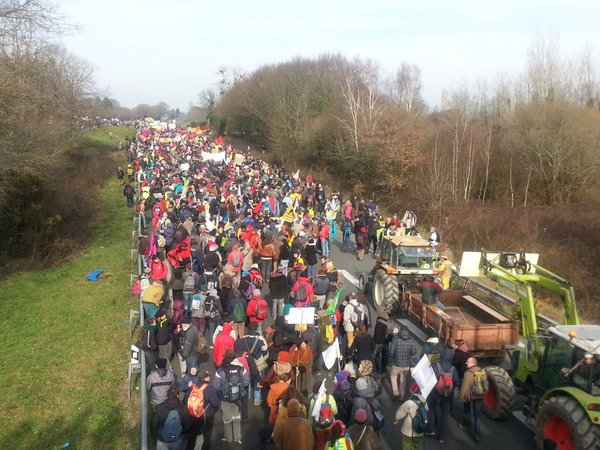 The project is widely seen as climaticide and not compatible with France's commitment to the #COP21 Paris Agreement on climate change. It is hard to justify a new airport near Nantes when the runways are far from capacity. But Perhaps the passenger terminal of the existing airport may need an upgrade.

Nantes is also only 2h 15mins by the high speed TGV train from Paris.

French President Francois Hollande announced on February 11 a regional referendum would be held later this years to settle whether the project would proceed or not. Plans for the airport construction have existed for some 50 years. The airport is strongly supported by Bruno Retailleau, President of the Regional Council of Pays-de-la-Loire, controlled by the right wing Republican Party and the far right Front Nationale.

Farmer and Greens Member of the European Parliament (MEP) Jose Bove articulated the contradiction of climate action arising from COP21 in Paris in December and building a new airport. He also questioned the necessity of putting the issue to a regional referendum, announced by Presidente Hollande on 11 February.

"Mobilization was never seen like this in Notre-Dame-es-Landes", welcomed Dominique Fresneau, co-chair of the ACIPA, one of the main opponents of the airport construction.

Lorelei Limousin from the Climate Action Network highlighteds the hypocrisy in proceeding with this project as being incompatible with the Paris Agreement.

"The Paris agreement, which we committed to contain global warming well below 2 degrees C at the end of the century, has now become a reality," she says. "In this context, a new airport is not consistent and would encourage strong airline greenhouse gas emissions. Especially in a country that already has more than 140 airports - More than Britain and Germany combined." Limousin said.

The statement/petition by 350.org states eloquently the case for abandonment of the NDDL airport project. This is an except:

"The commitment in the Paris agreement is not compatible with the construction of an airport at Notre Dame des Landes nearly 2,000 hectares of farmland and natural areas (inhabited by many protected species), which would generate extra emissions from aviation, concreting of one of the largest wetlands in the country, and the destruction of peasant farms.

"Conversely, preserving the rich and fertile farmland biodiversity of Notre Dame des Landes would be a sign of the maturity of a country ready to embark on a new path of energy and ecological transition, including current generations as future generations so desperately need. Abandon this project also would preserve not only the local ecosystem: abandon a project of gas emitter of greenhouse also helps preserve our future."

"For over 40 years, the project of Notre Dame des Landes airport arouses strong opposition from farmers and cooperative and farmers, environmental protection associations,inhabitants of the region, trade unionists, and many people across France. On site, opposition to the airport project has created rich experiences in teaching in the field of agro-ecology, permaculture, lightweight housing, etc.

"The quality of the studies that led to the authorization of the airport is itself questionable, even its usefulness is questionable, as are the expenses that its construction involves. The abandonment of this project, launched fifty years ago and now exceeded, is the only coherent and pragmatic position for the future of our climate - it is indeed in the terms of the Paris agreement that relevance of this project must be considered.

Dominique Lebreton, a co-ordination spokeperson for the protest said, "This event is important to show our determination and political show that we are the most numerous," alluding to the referendum announced by the president. "We have the duty to preserve these lands and the peasants to produce food for tomorrow", he said reported by Nordnet.

President Hollande announced a referendum on the issue on National television on February 11, 2016 to resolve the issue one way or another.

“If it’s yes, and the residents want the airport, then everyone will have to accept that decision,” Hollande declared during a primetime television interview with France 2 and TF1. “If it’s no – we all know that it is a project that has been spearheaded by the government, the government will have to assume the consequences." reported France24.

Although October has been mentioned to hold the referendum, it is still not clear exactly who will participate: whether it will include Loire-Atlantique Department or Pays de la Loire Department or Brittany as a whole.

Farmers of the ZAD are still fighting eviction by construction company Vinci. One of the activities of the day was the erection of a lookout tower to provide some advanced warning when construction trucks might move in to mobilize the local community in direct opposition to eviction and construction.

A Discussion on crowd numbers

Early Estimates of numbers at the rally varied widely with the Prefecture and police saying 10,000 to 15,000 were present at 1pm.

It was announced at the rally that there was 6 kilometers of pedestrian traffic jam on 4 lanes, more than 60,000 demonstrators against #NDDL!

Ronan Dantec, an EELV (Greens) Senator for Loire-Atlantique district 44, vice president of the Sustainable Development Committee of the Senate, Councilor of Nantes city, and climate spokesman for the United Cities and Local Government association (UCLG) gave an early crowd estimate of between 50,000 and 100,000 people attending.

Certainly many of the photographs show a huge crowd that probably numbered several tens of thousands.

Many of those commenting like Chris444 or Ronan Ennis in support of the low prefecture estimates were twitter accounts with few followers and relatively newly created. Essentially they were trolling the protest, obfuscating the issue favouring staunch supporter for the airport project, right wing Republican Senator Bruno Retailleau and Construction Company Vinci.

There were support actions in other cities as well. 250 people in Lyon drew attention to the climate impact of the NDDL airport project. They denounced the project as climaticide, as hypocrisy given the successful Paris agreement on climate change that French diplomacy was able to achieve in December 2015.

In Chambery 8000 gathered in solidarity with #NDDL protest. Lille also rallied in support of NDDL protest.

There was also Solidarity from afar including a protest outside the French consulate in Turkey.

Jean Jouzel also signed the petition calling to "relinquish building the airport of Notre-Dame-des-Landes" and to "respect the commitments made ​​at the COP21" with the text of the declaration organised by NGO 350.org.

You can add your own name to the statement/petition at 350.org in solidarity with French anti-airport #NDDL activists. 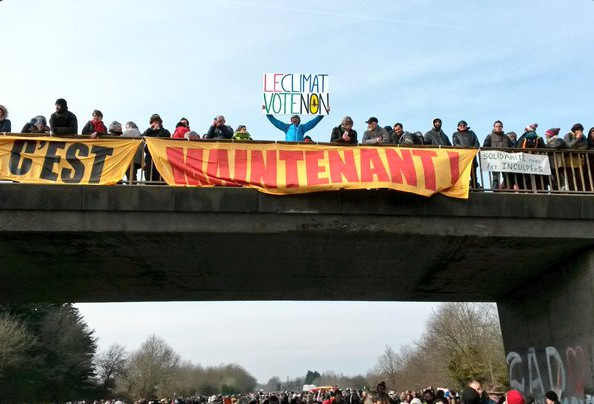 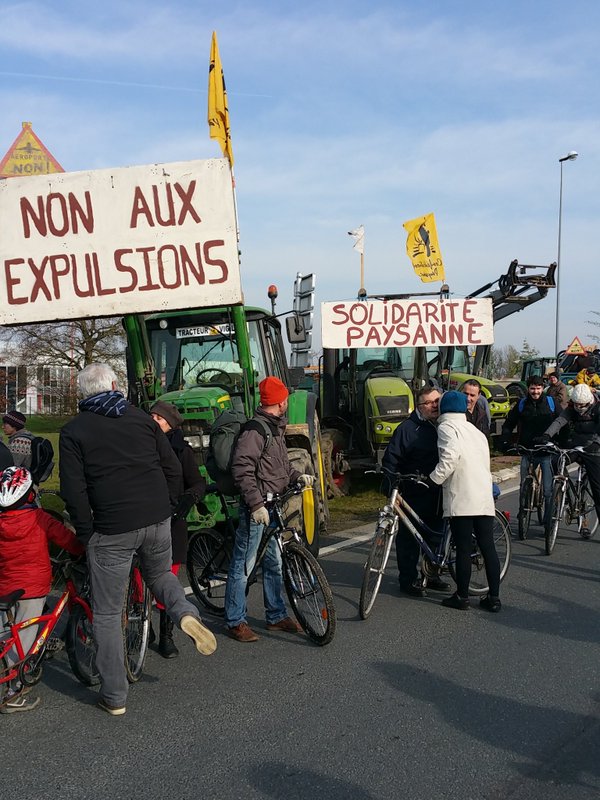 https://storify.com/takvera/france-mass-pr...
Add Your Comments
Support Independent Media
We are 100% volunteer and depend on your participation to sustain our efforts!